It has a long journey ahead. 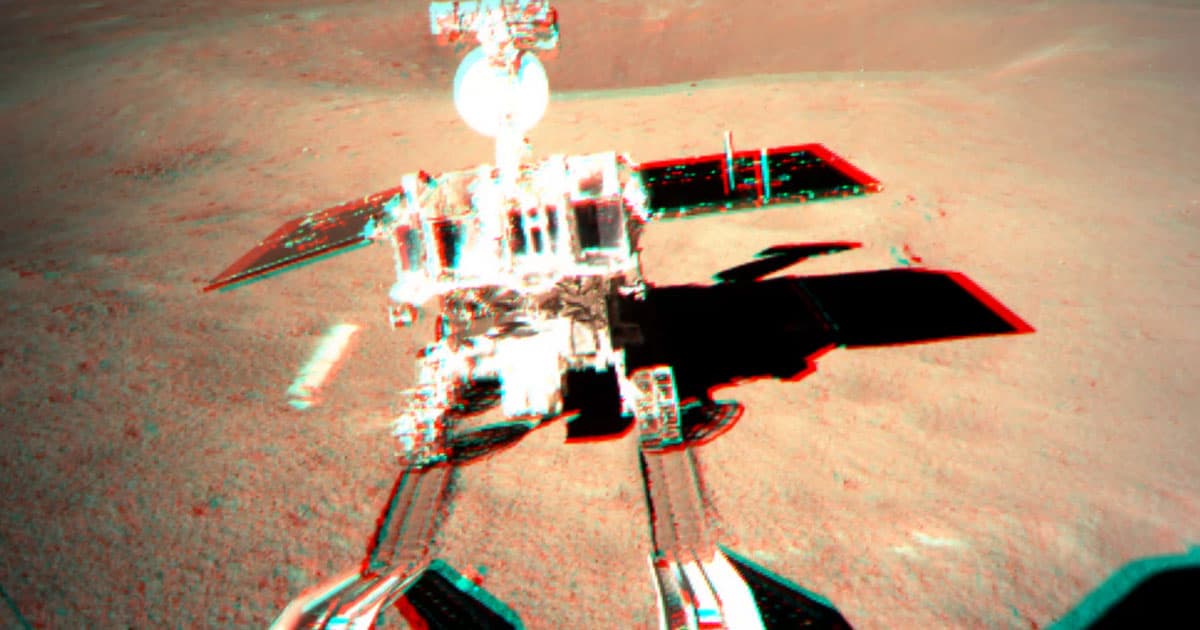 Earlier this week, Chinese lunar probe Chang'e-4 made history by becoming the first spacecraft to ever land on the far side of the Moon — the less-studied, mountainous half that faces away from the Earth.

Yesterday, we were blessed with a number of new high-resolution images, courtesy of China's National Space Administration, showing the more mysterious side of the Moon in all its glory. The pictures had to make their way through a special relay satellite called Queqiao since radio communication with the far side of the Moon is far more difficult.

Chang'e-4 launched on December 7 to explore the differences between the far, and near side of the Moon in terms of their mineral composition, and structure. It's also carrying a tiny biosphere containing a number of Earth-based species including potato plants and fruit flies.

The pictures, taken by Chang'e-4's on-board cameras, show the Yutu 2 rover— China revealed that name yesterday — rolling down tracks and leaving the Chang'e-4 lander behind.

The rover is situated in the floor of the 115 mile wide (186 kilometers) Von Kármán Crater near the Moon's South Pole.

Yutu 2 is the successor of the original Yutu rover that landed on the near side of the Moon back in December 2013 as part of the Chang'e-3 mission. Since the Chang'e-4 and accompanying rover were meant to be backups for their predecessors, the designs are strikingly similar.

The image above shows Yutu 2's specialized wheels, designed to survive the treacherous, yet low-gravity conditions on the Moon's surface.

Dark Side of the Moon?

The term "Dark Side of the Moon" is a misnomer — the far side of the Moon receives quite a bit of light, just as much as its near side.

As Space.com points out, the lunar day cycle lasts a much longer 709 hours — roughly 30 days on Earth. That means it will be light for half of that time, roughly two weeks.

In fact, Chang'e-4 landed shortly after the sun rose on the far side, meaning it has roughly 14 Earth days of daylight ahead of it.

And we can't wait to find out what the lander — and Yutu 2 — have in store for us.

READ MORE: Photos show Chinese lunar rover making tracks on the far side of the moon as it starts its historic exploration mission [Business Insider]

More on Chang'e-4: China Just Landed a Rover on the Far Side of the Moon

Read This Next
Expect Delays
Scathing Report Admits NASA Is Years Behind Moon Landing Schedule
Astronaut Drip
We Just Got the First Peek at NASA's Artemis Moon Landing Suits
Moonwalk Drip
NASA Inks Deals for Moonwalking Suits for Artemis Landings
Ice Ice Baby
Check Out This Moon-Shaped Ice Crystal on the Space Station's Window
Weredata
Startup Announces Plans to Bury Server Farm on the Moon
More on Off World
Carbon-Based
Yesterday on futurism
NASA Rover Finds New Potential Evidence for Ancient Life on Mars
Gifts For Mom
Yesterday on the byte
Jeff Bezos Ditches Plan to Land Rockets on Ship Named for His Mom
space salad
Yesterday on the byte
NASA Astronauts Harvest Delicious Space Vegetables, Sans Soil
READ MORE STORIES ABOUT / Off World
Keep up.
Subscribe to our daily newsletter to keep in touch with the subjects shaping our future.
+Social+Newsletter
TopicsAbout UsContact Us
Copyright ©, Camden Media Inc All Rights Reserved. See our User Agreement, Privacy Policy and Data Use Policy. The material on this site may not be reproduced, distributed, transmitted, cached or otherwise used, except with prior written permission of Futurism. Fonts by Typekit and Monotype.