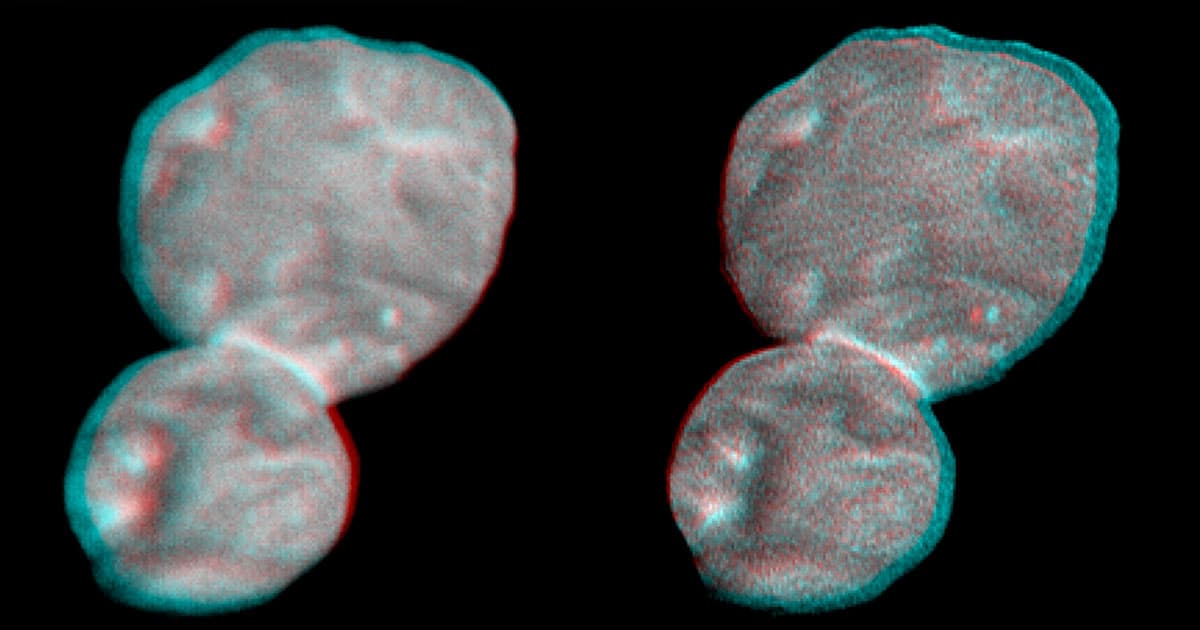 NASA's New Horizons spacecraft successfully completed a flyby of the Kuiper Belt object known as Ultima Thule on Jan 1, making it the most distant object ever visited by a human spacecraft. New Horizons collected about 7 gigabytes of data during its brief flyby, including pictures, spectrometer readings, and radio signals.

And now the first pieces of the puzzle are coming in.

In a live stream, NASA's New Horizons spacecraft team revealed new details about Ultima Thule, a space rock that's only 23 miles (37 kilometers) across, and floating some 4.1 billion miles (6.6 kilometers) away from Earth.

NASA scientists were puzzled by mysterious light signatures of the oddly-shaped space rock, but new data collected by New Horizons gives us a much clearer look:

We don't know much about why it's this shape, but we can make some educated guesses: rotating cloud of small rocks could start to spin around each other, two of which could start getting closer and closer, until they finally touch — not colliding but slowly pressing into each other — forming a "bi-lobed object," as NASA's New Horizons Co-Investigator Jeff Moore put it.

"This coming together of lobes would be at an extremely slow speed," Moore said. "It'd be about maybe one or a few miles an hour — the speed at which you might park your car at a parking space."

So why all this excitement about a tiny space rock only 37 kilometers across? It could help us answer some of the most fundamental questions about the creation of the solar system.

"Think of New Horizons as time machine that has brought us back to the very beginning of the solar system, to a place where we can observe the most primordial building blocks of the planets," Moore said.

The image taken by @NASANewHorizons - shown in its original version (left) & sharpened version (on right) - is the most detailed image of the farthest object ever explored by a spacecraft. https://t.co/gItPsMvbPC @NASA pic.twitter.com/i7rDBURNrw

More on Ultima Thule: New Horizons Will Fly Past the Most Distant Object We’ve Ever Visited