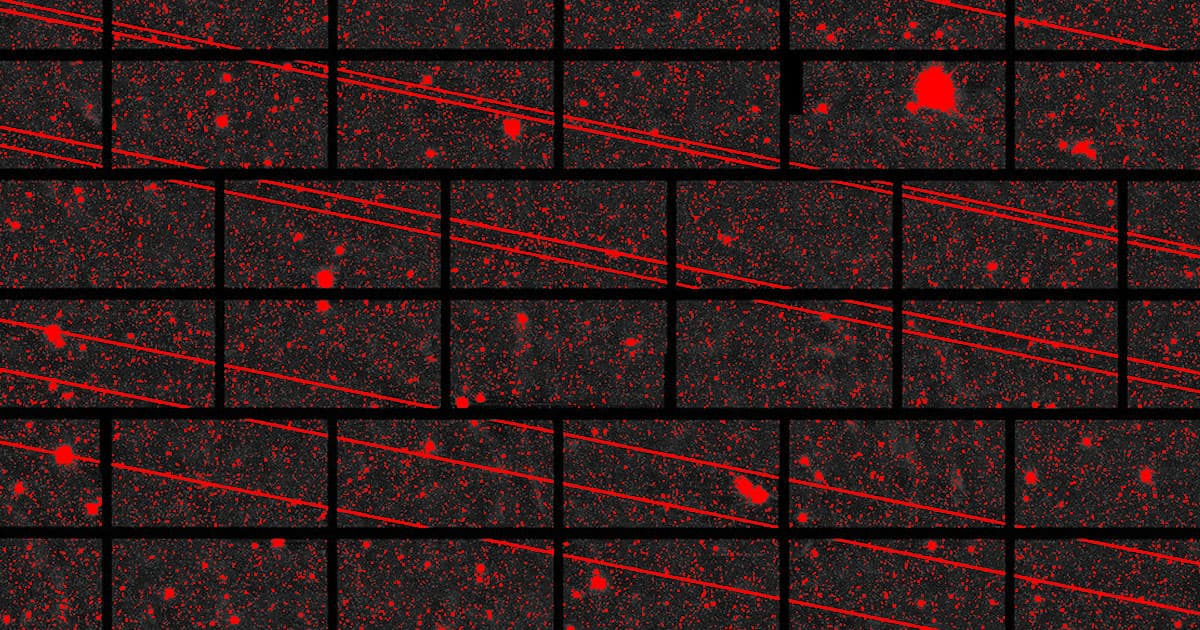 Ants of the Sky

Today, SpaceX is set to launch its next batch of broadband-beaming Starlink satellites, bringing the total currently in orbit to 422.

But as a new video uploaded to Twitter demonstrates, the controversial satellites have been wreaking havoc on astronomical research, often appearing as bright streaks in the sky — and adding potential radio interference. In the video, a band of bright, fast-moving spots of light can be seen in the night-sky, no telescope required.

The Elon Musk-owned SpaceX is  aware of the concerns and is now racing to find a fix. In January, SpaceX launched an experimental "DarkSat" satellite that featured an anti-reflective coating to make it appear less bright.

Despite the coating, many Starlink satellites are showing up, clearly visible to the naked eye, as they travel across the night sky.

SpaceX is now iterating on other fixes. In a Wednesday tweet, Musk noted that "solar panel angle" during orbit adjustments of the satellites caused them to be more noticeable and brighter. "We're fixing it now," Musk added without elaborating.

According to TechCrunch, all Starlink satellites will feature "sunshades" starting with the ninth Starlink launch, today's being the seventh.

Musk noted on Twitter today that the shades are "made of a special dark foam that’s extremely radio transparent, so as not to affect the phased array antennas," noting that they look "a lot like a car sun visor."

More on Starlink: ASTRONOMER: SPACEX SATELLITE SWARM WILL BE VISIBLE WITH NAKED EYE

Shot Well
Head of NASA Relieved to Hear Elon Musk Isn't REALLY Running SpaceX
12. 12. 22
Read More
Space Billboards
Russian Scientists Propose Plan to Launch Huge Advertisements Into Orbit Over Cities
10. 5. 22
Read More
Grain of Salt
There's a Huge Problem With Elon Musk's Promise to Bring Starlink to Iran
9. 27. 22
Read More
+Social+Newsletter
TopicsAbout UsContact Us
Copyright ©, Camden Media Inc All Rights Reserved. See our User Agreement, Privacy Policy and Data Use Policy. The material on this site may not be reproduced, distributed, transmitted, cached or otherwise used, except with prior written permission of Futurism. Articles may contain affiliate links which enable us to share in the revenue of any purchases made.
Fonts by Typekit and Monotype.