NASA's New Rover Just Shot a Rock With Its Laser

"You’re listening to the first audio recordings of laser strikes on Mars." 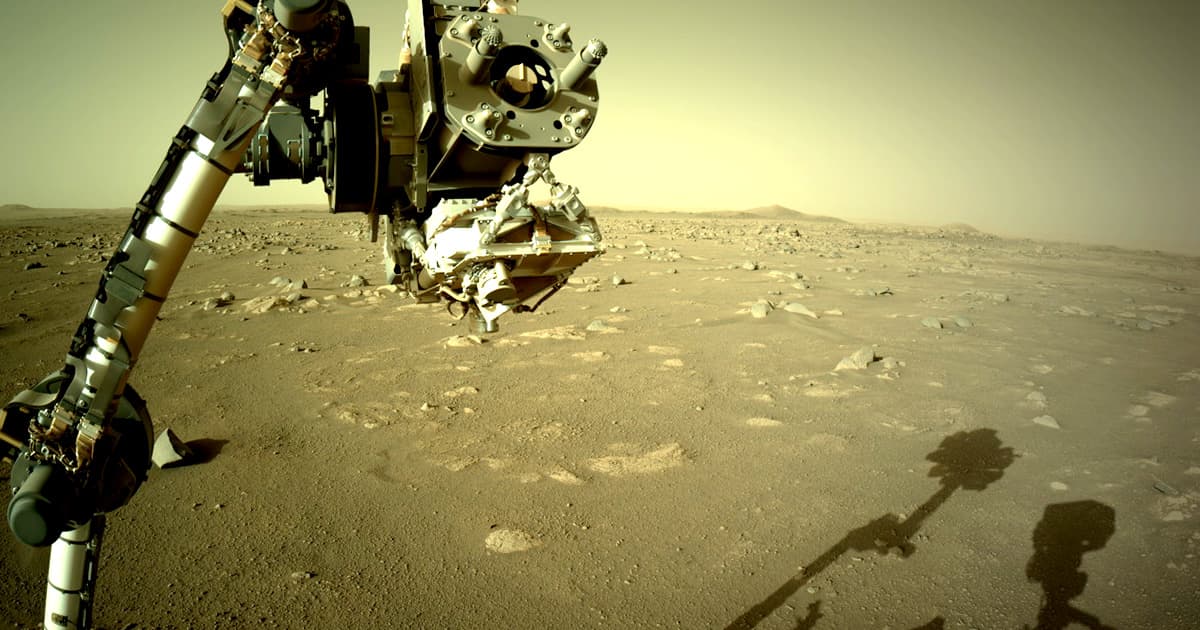 NASA's Perseverance Mars rover just shot its laser at a rock on Mars.

In a clip uploaded to SoundCloud, we get to listen in on the scientific instrument doing its work. "You’re listening to the first audio recordings of laser strikes on Mars," a tweet by the rover's official account reads.

"These rhythmic tapping sounds heard by the microphone on my SuperCam instrument have different intensities that can help my team figure out the structure of the rocks around me," the tweet reads.

"The microphone serves a practical purpose by telling us something about our rock targets from a distance," Sylvestre Maurice of the Institute for Research in Astrophysics and Planetary Science in Toulouse, France, said in a NASA blog post about the instrument. "But we can also use it to directly record the sound of the Martian landscape or the rover's mast swiveling."

The SuperCam's laser is designed to study the mineralogy and chemistry of rocks from a distance of up to 20 feet away. NASA is hoping to aid scientists in finding signs of fossilized microbial life as well.

"One of seven instruments aboard the Mars 2020 rover that launches this summer, SuperCam was built by a team of hundreds and packs what would typically require several sizable pieces of equipment into something no bigger than a cereal box," NASA's official description of the laser reads.

"It fires a pulsed laser beam out of the rover's mast, or 'head,' to vaporize small portions of rock from a distance, providing information that will be essential to the mission's success," the description continues.

The laser heats up the rock to around 18,000 degrees Fahrenheit. A special camera then analyzes the plasma released by the rocks to study their chemical makeup.

It's not the first time we've gotten to hear Perseverance's fascinating recordings, taken on a planet over a hundred million miles away.

Earlier this year, Perseverance shared the first-ever microphone recordings from the Martian surface.

"Things are sounding really good here," the rover tweeted earlier today, with a link to the eerie sounds of Martian winds. "This mic is located at the top of my mast. For this [February 19] recording, my mast was still down so the sound is a bit muffled."

It hasn't even been three weeks since Perseverance landed on Mars — and we've already been able to see some amazing results. The rover still has plenty of aces up its many sleeves, so it will only get more exciting from here.

More on Perseverance: NASA May Have Picked a Place to Fly the Mars Helicopter

Read This Next
Carbon-Based
NASA Rover Finds New Potential Evidence for Ancient Life on Mars
So Long
Tragedy! NASA Says the Voyager Space Probes are Powering Down
Expect Delays
Scathing Report Admits NASA Is Years Behind Moon Landing Schedule
Uh Oh
Something Very Bad Might Be About to Go Down at NASA
Moonwalk Drip
NASA Inks Deals for Moonwalking Suits for Artemis Landings
More on Off World
TMNT
Yesterday on the byte
Chunky Turtle Spotted Near NASA's Mega Moon Rocket
Cloud Spotting
Thursday on the byte
NASA Needs Your Help Spotting Clouds On Mars
Rolling Coal
Wednesday on futurism
Space Travel Will Absolutely Gut the Environment, Scientists Warn
READ MORE STORIES ABOUT / Off World
Keep up.
Subscribe to our daily newsletter to keep in touch with the subjects shaping our future.
+Social+Newsletter
TopicsAbout UsContact Us
Copyright ©, Camden Media Inc All Rights Reserved. See our User Agreement, Privacy Policy and Data Use Policy. The material on this site may not be reproduced, distributed, transmitted, cached or otherwise used, except with prior written permission of Futurism. Fonts by Typekit and Monotype.