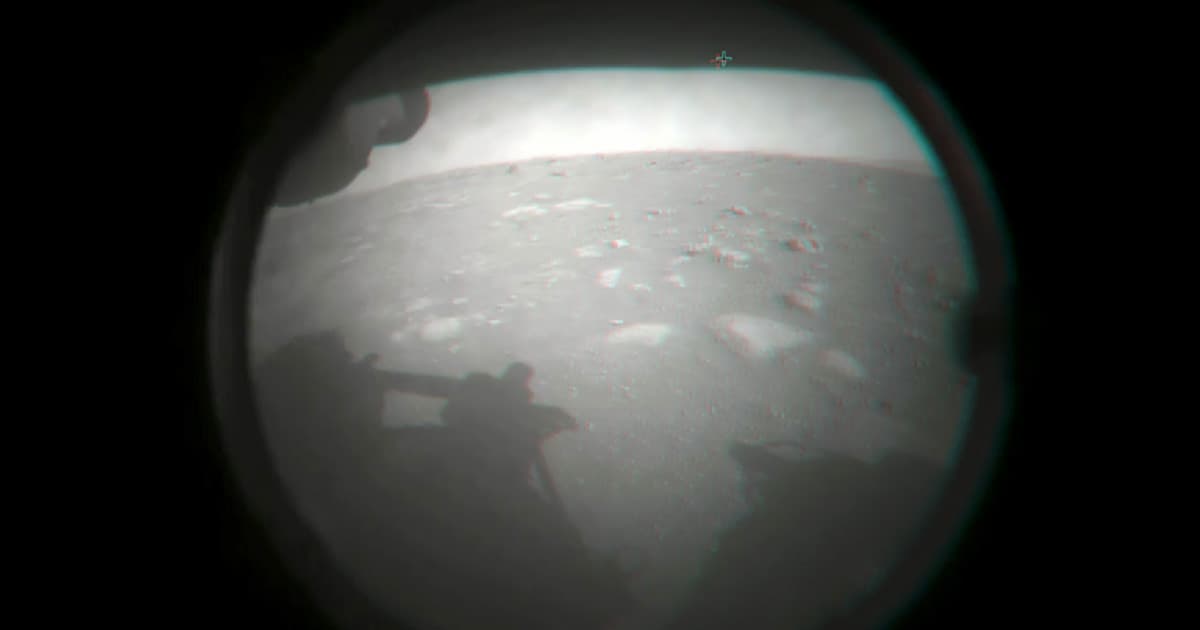 NASA's Perseverance Mars rover has successfully landed in the Jezero crater, a region believed to be an ancient dried up river delta. Touchdown was confirmed at 3:56 pm Eastern time.

The news was met with loud cheering and whooping at NASA's Jet Propulsion Lab mission control.

It was a daring landing as the crater is lined with cliffs, sand dunes, and boulders. Thanks to Perseverance's sophisticated landing instruments, the rover was able to take pictures of the surface below, deciding where to land on its own while out of radio communication with Mission Control.

It's the agency's fifth robotically operated Mars rover to have successfully landed on the Martian surface following Sojourner in 1997, Opportunity and Spirit in 2004, and Curiosity in 2012.

Perseverance weathered the daunting Seven Minutes of Terror as it slowed its descent from a screaming 12,100 mph to just 2 mph first using a massive 70.5-foot supersonic parachute and then a rocket-powered "sky crane" as it approached its landing spot.

Now, Perseverance's journey truly begins. The rover will use seven suites of scientific instruments to search for signs of ancient microbial life in the Jezero crater, an ancient delta that scientists believe contains clay deposits full of potential biosignatures.

NASA is also hoping to lay the groundwork for a future sample return mission. Perseverance will scoop up and stow samples of Martian rock, each about the size of a piece of chalk, inside special tubes for recovery during future missions to the Martian surface.

Perseverance can also cover three times the distance, an average of 650 feet a day, compared its predecessor Curiosity thanks to a sophisticated autopilot system.

The rover will even release a Mars Helicopter, called Ingenuity, that was strapped to its belly during its journey to Mars. Once it's powered up for the first time later this year, Ingenuity could end up making history by becoming the first time a human-made aircraft to fly on another planet.

So far, only two countries have completed successful landings on Mars — the United States and the Soviet Union — but a third country may soon have a shot of joining that very exclusive list. China's Tianwen-1 Mars lander will attempt to plunge through the Martian atmosphere in May — meaning that the Red Planet has never, at least in human history, been this crowded.

Read This Next
Carbon-Based
NASA Rover Finds New Potential Evidence for Ancient Life on Mars
So Long
Tragedy! NASA Says the Voyager Space Probes are Powering Down
Expect Delays
Scathing Report Admits NASA Is Years Behind Moon Landing Schedule
Uh Oh
Something Very Bad Might Be About to Go Down at NASA
Moonwalk Drip
NASA Inks Deals for Moonwalking Suits for Artemis Landings
More on Off World
TMNT
Jul 1 on the byte
Chunky Turtle Spotted Near NASA's Mega Moon Rocket
Cloud Spotting
Jun 30 on the byte
NASA Needs Your Help Spotting Clouds On Mars
Rolling Coal
Jun 29 on futurism
Space Travel Will Absolutely Gut the Environment, Scientists Warn
READ MORE STORIES ABOUT / Off World
Keep up.
Subscribe to our daily newsletter to keep in touch with the subjects shaping our future.
+Social+Newsletter
TopicsAbout UsContact Us
Copyright ©, Camden Media Inc All Rights Reserved. See our User Agreement, Privacy Policy and Data Use Policy. The material on this site may not be reproduced, distributed, transmitted, cached or otherwise used, except with prior written permission of Futurism. Fonts by Typekit and Monotype.