Tomorrow's Mars Landing Will Be Hardest in NASA's History 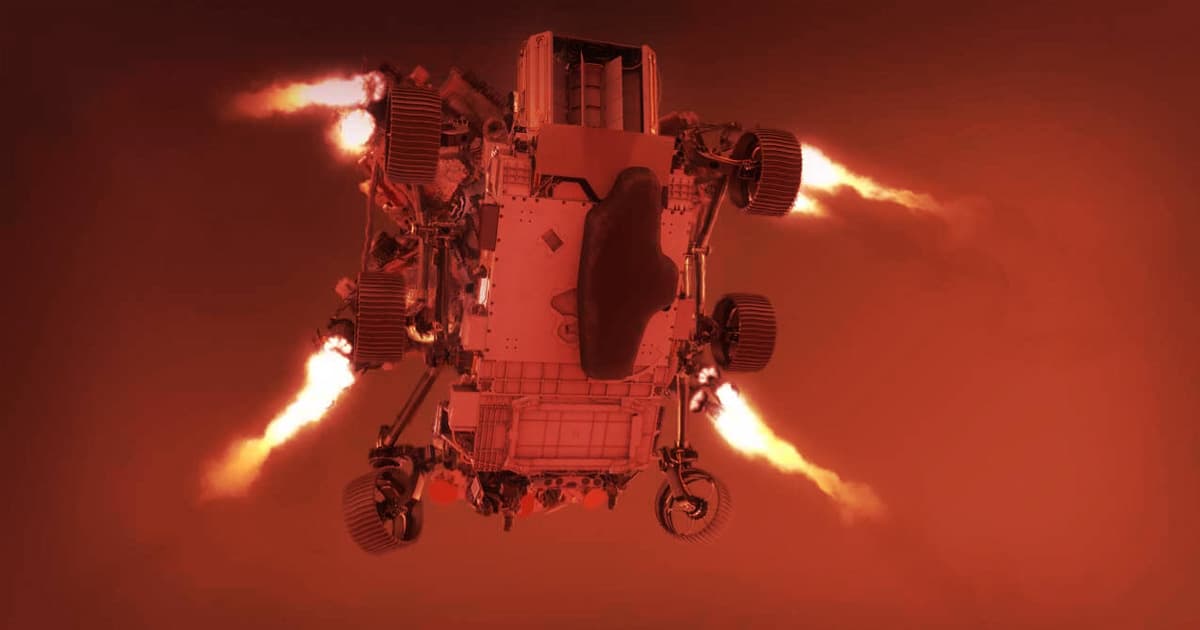 NASA's Perseverance Mars rover is preparing to plunge through the planet's thin atmosphere tomorrow, then attempt to land on the desolate surface below.

It's an extremely exciting prospect. The 28-miles-across Jezero Crater the rover is aiming for is believed to be a massive dried up river delta, potentially harboring signs of ancient life on the Red Planet.

But it's also extremely difficult terrain, lined with steep cliffs and sand dunes, making the already treacherous journey from orbit even harder. In fact, the landing will take place on some of the most challenging Martian terrain compared to any other missions to Mars preceding it, according to NASA's team — and that's on top of the "Seven Minutes of Terror," a harrowing sequence of events in which the spacecraft travels too fast for its radio signals to reach Earth. In other words, it has to make its descent entirely disconnected from home.

That means engineers at NASA are biting their nails. "We’ve had a pretty good run of successful missions recently and you never want to be the next one that isn’t," landing team engineer Erisa Stilley told the Associated Press.

Perseverance will rely on its own sensors even more than previous missions.

"Perseverance will be the first mission to use Terrain-Relative Navigation," Swati Mohan, guidance, navigation and control operations lead at NASA's Jet Propulsion Laboratory, said in a recently released video about the rover's landing.

"While it’s descending on the parachute, it will actually be taking images of the surface of Mars and determining where to go based on what it sees," Mohan said. "This is finally like landing with your eyes open — having this new technology really allows Perseverance to land in much more challenging terrain than Curiosity, or any previous Mars mission, could."

Once on the ground, Perseverance's autopilot will be able to travel even further than any of its predecessors thanks to its sophisticated autopilot systems.

"Percy’s got a new set of kicks," chief engineer Adam Steltzner told AP, "and she is ready for trouble on this Martian surface with her new wheels."

So far, NASA has landed eight out its nine missions to Mars. In fact, the United States is the only country to make a fully successful landing on the Red Planet.

But that may soon change. China's Tianwen-1 probe entered orbit around Mars late last week. In May, the probe will release a lander and solar-powered rover towards the rocky surface below — enduring its own Seven Minutes of Terror.

More on Perseverance: When NASA’s New Rover Lands, Its Other Lander Will Listen for the Impact