We're not ready to say goodbye. 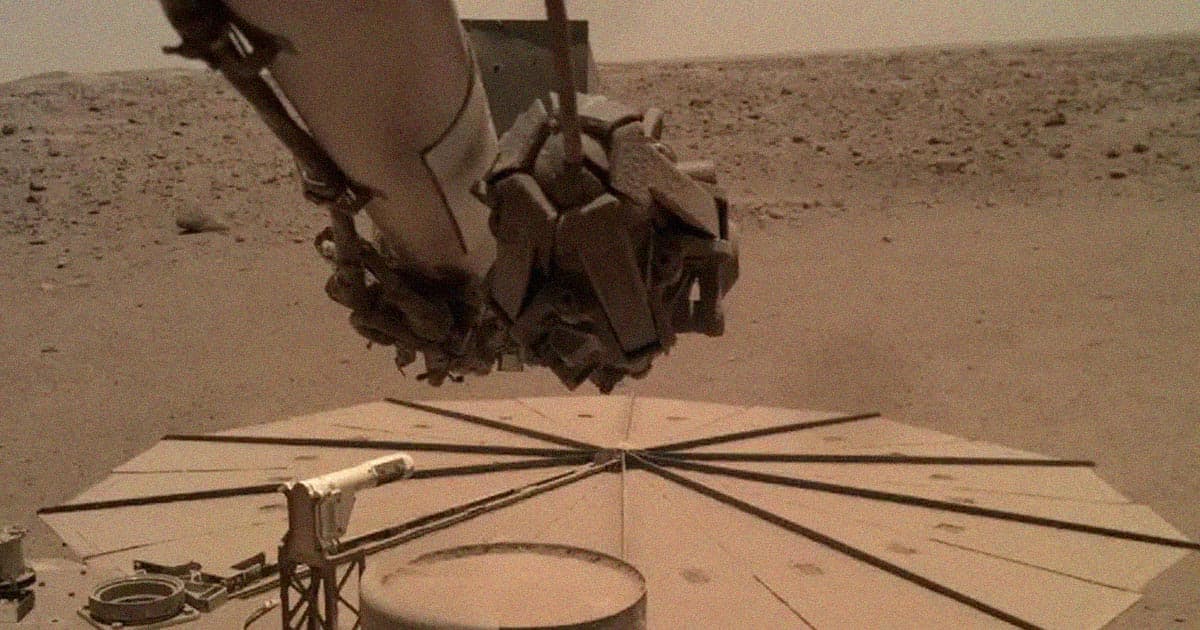 The end of NASA's InSight Mars lander is, well, in sight.

The spacecraft has long been battling with Martian dust obstructing its umbrella-shaped solar panels, making it increasingly difficult to charge its batteries.

Now, in a Tuesday update, NASA revealed that Insight's science operations are coming to a close later this summer. By December, they say, the lander will have "become inoperative."

It's the unfortunate conclusion to an otherwise successful scientific mission. The lander has managed to detect more than 1,300 marsquakes to date using a highly sophisticated suite of instruments, according to the space agency.

"InSight has transformed our understanding of the interiors of rocky planets and set the stage for future missions," said Lori Glaze, director of NASA’s Planetary Science Division, in a statement.  "We can apply what we’ve learned about Mars’ inner structure to Earth, the Moon, Venus, and even rocky planets in other solar systems."

The minivan-sized spacecraft landed on Mars in November 2018 and has provided scientists with unprecedented data that peers into the deep interior of Mars, along with recording weather data on the Red Planet's surface.

A notable failure of the mission involved the saga of the lander trying to bury its hammer drill-like "mole" temperature probe into the Red Planet's surface, with teams encountering and overcoming several obstructions and setbacks while attempting to drill into the Martian surface. After countless attempts, the mole instrument team at the German Aerospace Center called it quits last year.

Last year, the InSight team was able to remove dust from the lander's pair of massive, seven-foot solar panels by directing its robotic arm to trickle sand onto the panels to help the wind remove the dust.

The team was hoping for "dust devil" weather events to clear the panels, but unfortunately, the pesky grit kept accumulating.

"We’ve been hoping for a dust cleaning like we saw happen several times to the Spirit and Opportunity rovers," said Bruce Banerdt, InSight’s principal investigator, in the statement. "That’s still possible, but energy is low enough that our focus is making the most of the science we can still collect."

It's a sad predicament. Even just 25 percent of the panels could provide enough power to keep scientific operation going, but that's simply not possible right now.

That means by December, the team is expecting to receive the very last signs of life from InSight, in yet another melancholic end to a piece of manmade machinery that not only managed to land on a distant planet — but collect invaluable scientific data there as well.

More on InSight: NASA’s Mars Mole Is Giving Up

Read This Next
Martian Oases
Scientist Proposes Growing a Forest Inside a Bubble on Mars
Putting Things In Perspective
Amazing Artemis Photo Shows Every Human, Alive or Dead, Plus the Moon
Fighting Words
Retired NASA Astronaut Scott Kelly Dishes on Ukraine, Russia, and Moon Mission
Psychological Warfare
Experts Excoriate NASA Report Claiming James Webb Wasn't Homophobic
Big Impact
Meteorite Hit Mars So Hard NASA Thought It Was a Quake
More on Off World
Big Boi
4:21 PM on the byte
Epic Artemis Video Shows the Astonishing Size of the Moon
International Sti...
3:44 PM on the byte
New Details Emerge About the "Peculiar Odor" on International Space Station
Wrong Rocket
Yesterday on the byte
Space Tourism Company's Website Accidentally Shows Photo of Rocket Exploding
READ MORE STORIES ABOUT / Off World
Keep up.
Subscribe to our daily newsletter to keep in touch with the subjects shaping our future.
+Social+Newsletter
TopicsAbout UsContact Us
Copyright ©, Camden Media Inc All Rights Reserved. See our User Agreement, Privacy Policy and Data Use Policy. The material on this site may not be reproduced, distributed, transmitted, cached or otherwise used, except with prior written permission of Futurism. Articles may contain affiliate links which enable us to share in the revenue of any purchases made.
Fonts by Typekit and Monotype.