It's Official: Cassini Just Completed Its Death Dive Into Saturn

The spacecraft has burned up in Saturn's atmosphere. 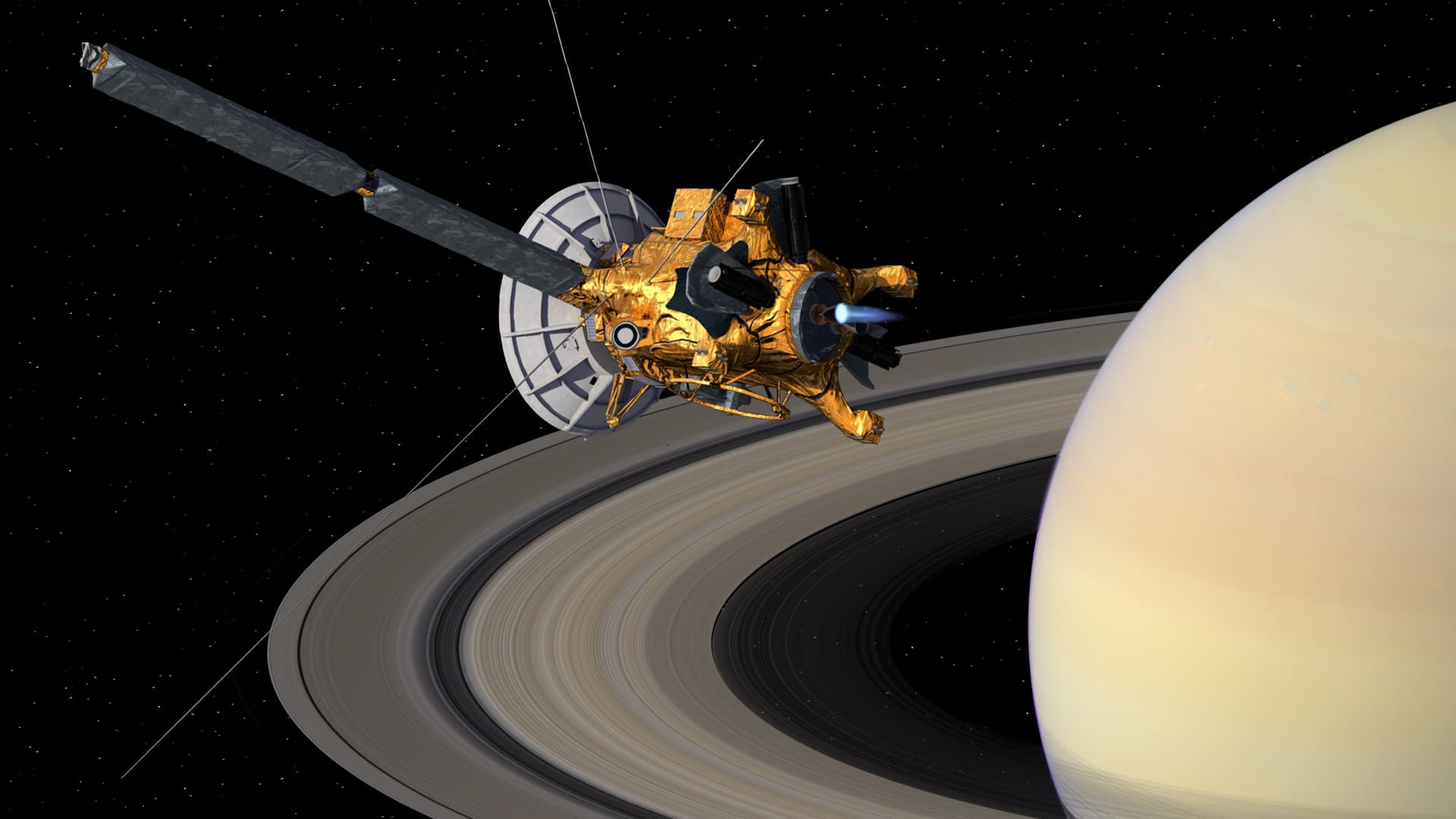 After almost 20 years, 7.9 billion kilometers, and more than 453,000 images, Cassini has ended its mission. Today marks the culmination of Cassini's "grand finale," which began in April. On Friday morning, NASA confirmed that the robotic spacecraft had sent its final signal, sent as it descended into Saturn's atmosphere.

Cassini, a joint endeavor from NASA, the European Space Agency, and the Italian Space Agency, was launched in 1997 with the goal of better understanding Saturn, its planets, and its moons. Its hundreds of flybys of those moons, and orbits of the planet itself, have given scientists insights into worlds that had previously been shrouded in mystery, altering their understanding of our solar system.

Cassini's fateful descent wasn't pre-ordained at the time of its launch. As the spacecraft ran low on rocket fuel, the team had to make a decision. The team evaluated several options for the end of the spacecraft's mission, according to NASA's web site. Cassini could have returned to Jupiter or moved on to Uranus, stayed in a more stable (but less scientifically interesting) orbit, or even learned more about moons like Enceladus or Titan, says Roger N. Clark, a senior scientist with the Planetary Science Institute who has worked on the Cassini team, in an interview with Futurism.

But its current route, mortal as it may be, was too tempting. "The chosen tour with the close passes of the rings and then between the rings and planet are retuning unique data that is answering many questions," Clark says. During its swan dive, Cassini will take measurements of the gravity and mass of Saturn's legendary rings, along with directly sampling the material that makes up the rings, that are only possible with this trajectory, Clark noted.

Spacecraft navigators predict the trajectory with astounding precision. They have known for days that Cassini was on track to collide with a large ring particle, destabilizing its orbit and send it crashing towards the surface. In the end, Cassini will have burned up in Saturn's atmosphere, as a meteor would; any parts that don't burn up will plummet into the planet's center, where they will melt without damaging the planet.

The Finale, But Not The End

The information Cassini gathered has enabled scientists to make discoveries that have warranted the publication of nearly 4,000 scientific papers. It captured active geysers on Enceladus, one of Saturn's 62 moons. It revealed new details on Titan, another of Saturn's moons with some of the most Earth-like features discovered in our solar system (complete with liquid seas and a weather system) that may now be a candidate for future exploration.

It has even gathered information that is shaping another NASA mission, to Jupiter's moon Europa. Perhaps most importantly, it illuminated processes and forces that shaped the early days of the solar system—forces that have made our planet what it is. It's given us new candidates for where life might exist, and what it might look like if we find it.

In short, Cassini not only fulfilled its mission, it exceeded expectations. "Not only did Cassini provide the data to answer questions at the start of the mission, the data led to new questions and the extended mission phases answered many of those questions, and posed yet more,"  Clark says. "As we continue to analyze the flood of data we have in hand, more questions will undoubtedly be posed and answered." Much of the data still hasn't been analyzed in detail, he says, which means that scientists will be looking at the information for decades to come.

Discoveries made from Cassini's observations have opened up the possibility of several more missions. NASA already has plans to send a spacecraft to Europa, and is determining how best to explore the hydrocarbon seas of Titan. They may create a probe to explore Saturn's atmosphere in greater depth, or even that of more distant Uranus.

Clark says he will be working on the Europa mission, plus another project called TREX to create software so that robotic spacecraft can autonomously search for materials of interest, such as water or even life itself. His team, which processes data from the Visual and Infrared Mapping Spectrometer, recently fixed a bug with the machine's calibration, giving the researchers better-quality data than they ever thought possible. But funding for Cassini's science teams will end in 2018, and they might not get to finish making sense of it all.

"I have been working on Cassini for almost 30 years, so it has been a major part of my career, and certainly a highlight," he says. And though he's excited about the quality of the data now, and the next projects to come, there's a sadness there. "It is like the death of a close friend."

Clark isn't the only one who is feeling the bittersweetness of the project's end. "Cassini's Grand Finale has been fantastic, both scientifically and technically," a Cassini spokesperson tells Futurism. "The mood of the team heading toward end of mission is a mix of joy and satisfaction, given the mission's enormous success, tinged with sadness at the impending loss of their stalwart spacecraft. We've had a long time to prepare, but it's never easy to say good bye."

Read This Next
Monkey Business
China Plans to Send Monkeys to Space Station to Have Sex With Each Other
Overview Effect
William Shatner Says His Space Trip Left Him With a Feeling of Terrible Grief
Astronaut Drip
We Just Got the First Peek at NASA's Artemis Moon Landing Suits
Blast Off
Former Astronaut Details Quest to Grow Cannabinoids in Space
RIP
Unfortunate Comet Flies Too Close to the Sun, Disintegrates and Becomes a Ghost
More on Off World
Gl1tc4
2:44 PM on the byte
NASA Says Another James Webb Instrument Has Suffered a Glitch
comet Spotting
2:06 PM on the byte
Behold! Dazzling Green Comet Approaches
Drama Bomb
Wednesday on the byte
European Space Agency Halts Plans to Send Astronauts to Chinese Space Station
READ MORE STORIES ABOUT / Off World
Keep up.
Subscribe to our daily newsletter to keep in touch with the subjects shaping our future.
+Social+Newsletter
TopicsAbout UsContact Us
Copyright ©, Camden Media Inc All Rights Reserved. See our User Agreement, Privacy Policy and Data Use Policy. The material on this site may not be reproduced, distributed, transmitted, cached or otherwise used, except with prior written permission of Futurism. Articles may contain affiliate links which enable us to share in the revenue of any purchases made.
Fonts by Typekit and Monotype.