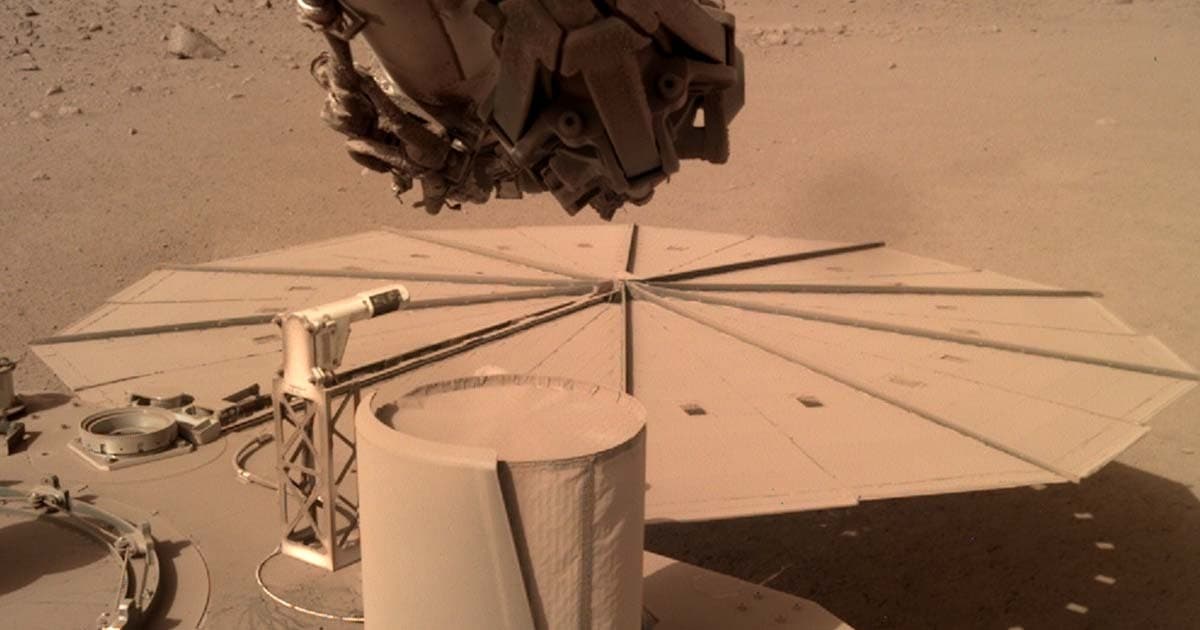 After accruing even more dust during a recent storm, NASA scientists believe that the InSight Mars lander may finally be on its last legs.

SpaceNews reports that although the InSight lander has recovered following a huge January dust storm on the red planet, the gradual-yet-significant accumulation of detritus on the craft's solar panels is drastically reducing its power levels to the point that NASA expects it to be out of commission by the end of 2022.

As principal InSight investigator Bruce Banerdt said during a meeting about the Mars mission, the January 7 dust storm came on "very rapidly" and without "any early warning," the report notes. While the InSight managed to exist the "safe mode" it entered during the storm, the dust that continues to accumulate on its solar arrays is, according to Banerdt, ultimately going to be what shuts it down for good.

Last summer, Banerdt predicted that the dust on the InSight's solar arrays — an issue other NASA's Mars equipment doesn't seem to experience because the planet's winds appears to clear them off — would lead to the lander's demise by spring 2022 because they block the solar rays needed to power up the machine. That date's been pushed back to the end of the year, but nevertheless, it's a-coming.

"Our current projections indicate that the energy will drop below that required to operate the payload in the May/June time frame and probably below survivability some time near the end of the year," the InSight investigator said during the most recent meeting of the Mars Exploration Program Analysis Group, per SpaceNews.

From November 2018 to February 2021 : Mars InSight solar panels are now so covered in martian dust that the end of mission is expected around this summer. pic.twitter.com/syL0pQfocH

To delay the inevitable, NASA has since last year been having InSight do an ingenious exercise where it scoops up Mars dirt and allows it to slowly drift over its solar panels, which in turn cleans off some of the caked-up dust. Though Banerdt admits that this exercise "sounds like a crazy thing to do," it's reportedly worked, temporarily increasing energy output by one to three percent on each of the several times the lander's been instructed to do it.

Although the InSight team has submitted a request to NASA for an extension on the lander's mission, which is funded through the end of 2022, that would rely on a "cleaning event" extending its lifespan, and Banerdt told SpaceNews that his group is "not betting our mortgage on it."

"We don’t have a crystal ball, but our best estimate is that we probably won’t be getting very much science data past the summer," he said. "The spacecraft is probably not going to last more than about a year."

More on Mars deaths: NASA Scientists Are Gonna Bawl Their Eyes Out When The Tiny Mars Chopper Dies