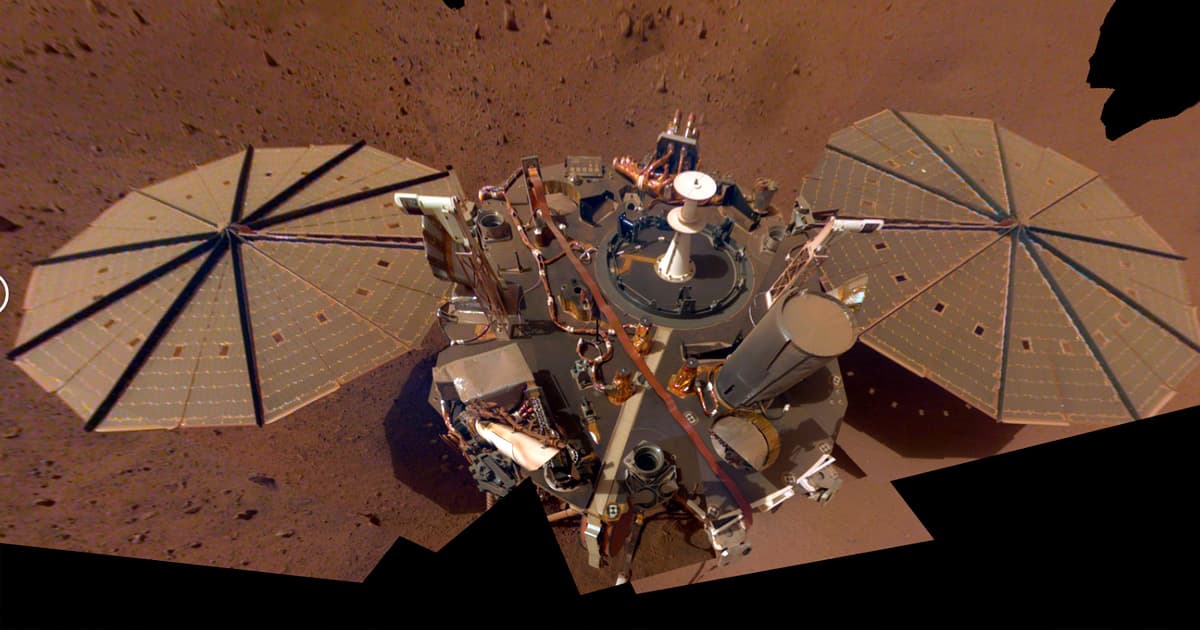 Aphelion is My D&D Character's Name

Some of its scientific instruments already had to be shut off.

Some of its scientific instruments already had to be shut off.

After spending a little over two and a half years on the surface of Mars, NASA's Insight Mars Lander is looking a little worse for the wear.

The lander is getting pummeled with Martian dust, which is accumulating on top of its solar panels. That means the amount of power it can generate is being drastically reduced, SpaceNews reports, which is endangering the entire mission.

The mission was recently extended through the end of 2022 to collect data about seismic activity on the Red Planet. But thanks to dust blocking the solar panels, the mission may have to be cut short — an unfortunate ending for a lander that brought us a wealth of extraordinary new data collected on the Martian surface.

While the InSight team at NASA's Jet Propulsion Lab (JPL) saw the decrease coming — the lander can only generate less than 700 watt-hours now as compared to the nearly 5,000 watt-hours immediately after landing back in 2018 — further declines thanks to dust build-up could spell bad news.

The team was hoping that winds would remove some of this dust, but they apparently never came.

The team even tried to scoop up some Martian soil and release it near the panels using the lander's robotic arm, which increased energy output but not enough. Three separate attempts "bought us a little bit of headroom that we didn’t have before," Bruce Banerdt, principal investigator for the InSight mission at JPL, said during a recent meeting, as quoted by SpaceNews.

Making matters worse is the fact that Mars is approaching the farthest point in its orbit from the Sun, a position known as the aphelion. Two months later, however, energy levels could start increasing again.

Some instruments, including those that collect weather and magnetic field data, have already been shut off.

"We hope to get some of these instruments up to at least do periodic measurements after aphelion," Banerdt said.

"There may be a month or two of time where we might have to turn off the seismometer, but we’re trying to tighten our belts and sharpen our pencils to see whether we can operate straight through," he added.

But even then, without any significant increases, the team may be forced to end the mission around April 2022, according to Banerdt.