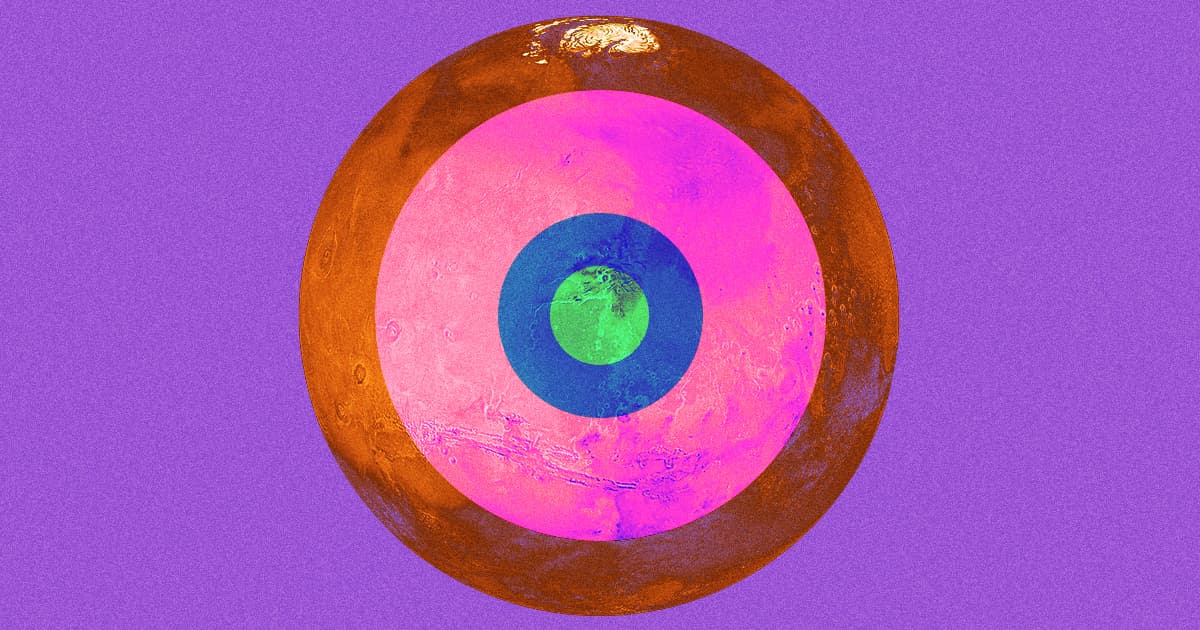 This is only the second planet's core we've analyzed.

This is only the second planet's core we've analyzed.

Following the Earth, Mars is just the second planet in the universe to have its core measured and analyzed by human scientists, Nature News reports. Thanks to the InSight lander's ability to listen to Mars' seismic activity, NASA discovered that Mars' core is less dense than they thought — and just half the size of Earth's.

Scientists can infer certain things about the hidden inner layers of planets from a distance, but getting actual measurements requires landing specialized equipment on the surface. That's why we have a specific figure for the width of Mars' core — between 3,620 and 3,720 kilometers in diameter — but only have estimates for other planets, like Mercury and Venus, nevermind exoplanets in other systems.

In this case, the InSight lander was able to listen in on marsquakes, Nature reports, some of which were strong enough to send seismic waves down to and through the planet's innermost layer.

It's a relief that InSight made this discovery when it did, as NASA scientists aren't too optimistic about the spacecraft's continued survival. Dust has been piling up on its solar panels, and Mars is also currently at a stage of its orbit that takes it farther away from the Sun.

"This is going to cause us to reduce our instrument usage over the next few months," InSight project scientist Mark Panning told Nature.

But until then, NASA still has plenty of data to pore over, like the unexpected finding that Mars' core is considerably larger and less dense than scientists had estimated. That leaves the InSight scientists with the new challenge of figuring out which lighter elements are in there spacing things out.