No one likes creepy voices and bright flashing lights. That's the point. 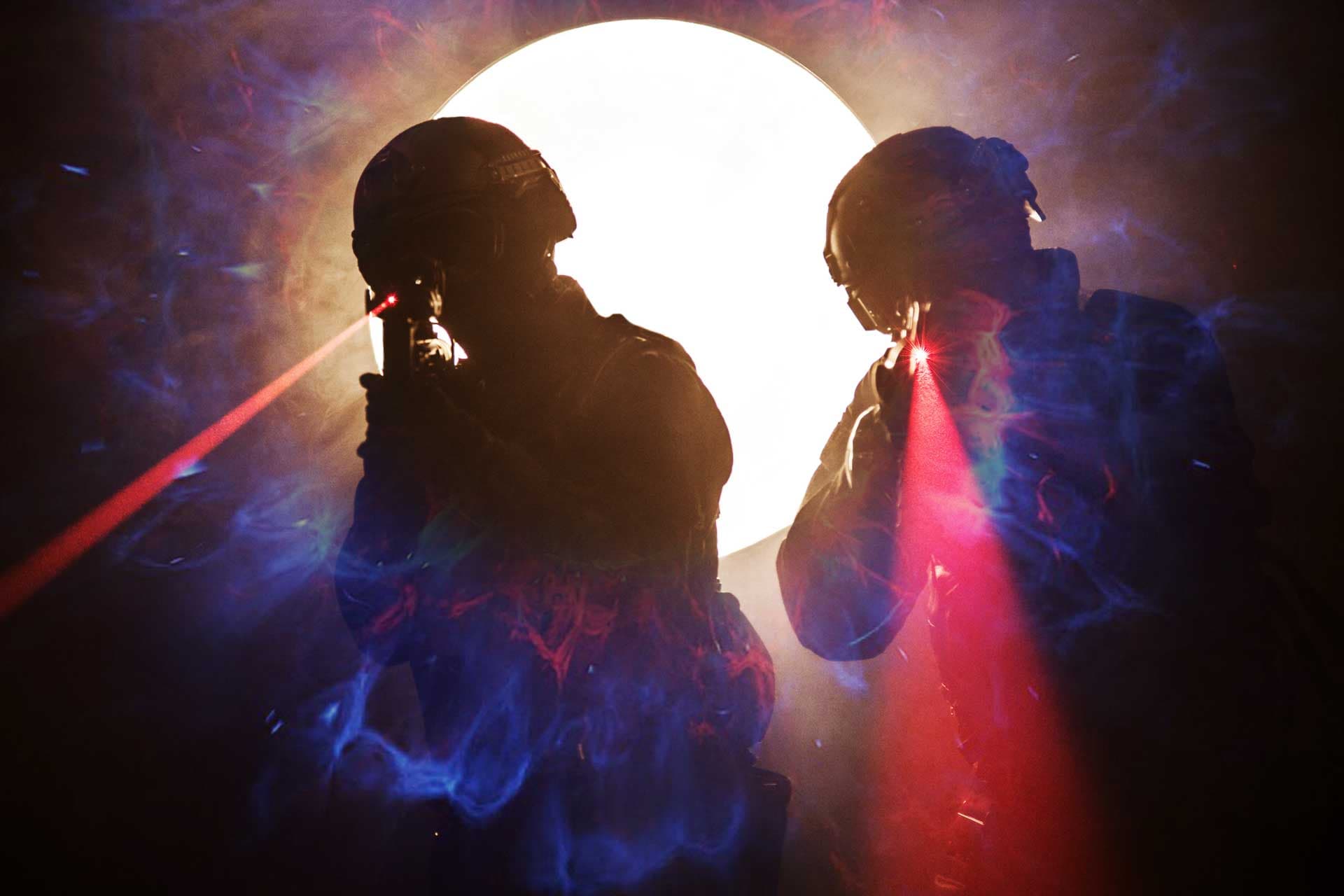 For the U.S. Department of Defense (DoD), killing people isn't all that complicated. A budget of more than $600 billion per year buys a whole lot of tanks, guns, and bombs.

But not killing someone proves to be a bit more complicated. How about just stunning them a bit from far away? Or maybe setting their clothes on fire without having to look them in the face?

For that, we've got the Joint Non-Lethal Weapons Development Program (JNLWD). The program's purpose: to develop weapons and other devices military personnel can use to incapacitate targets without outright killing them. As explained on the program's FAQ, the goal of the JNLWD is to fill the gap between "shout and shoot" (truly, we should all be grateful the armed forces acknowledge that such a gap exists).

The JNLWD's latest breakthrough is the Non-Lethal Laser-Induced Plasma Effect (NL-LIPE) system. They recently gave Defense One a look at the in-development device. And it's truly a sight to behold.

Rather, a sound to behold. Take a listen below (and maybe make sure your pets are out of the room because, we promise, they really hate this).

Here's how this device is useful. Imagine an enemy is getting a bit too close for comfort, and you want them to back off.

You could use a stun grenade, a blinding flash of light and noise that leaves the enemy disoriented and stunned. Those only work if you're close enough to throw them, though.

And maybe you have some good guys standing in between. How do you blast the enemy but not the good guys? That's where the lasers come in.

First, the NL-LIPE operator shoots a burst of light at the target using a femtosecond laser. This rips electrons from the air molecules to create a ball of plasma at the targeted site. The operator then manipulates the plasma ball using a second nanolaser, directing the plasma to produce sound or light, or even burn clothing.

Right now, of course, the technology is still in development, so it only works under pretty specific conditions. Eventually, though, the military thinks it could get the device to work at distances of tens of kilometers, David Law, head of JNLWD's technology division, told Defense One. That would give it a longer range than any other non-lethal weapon.

Law also said the researchers believe they're very close to getting their device to outright "speak" to them, but the creepy almost-voice it already produces would likely be enough to get any enemies to turn tail.

Read This Next
"Hoodwinked"
New Pentagon Group Accused of Trying to "Bury" UFOs Again
Hmmmmmm
The Pentagon Just Released Its UFO Report
Crush Depth
Debris Found From Missing Submarine, All Crew Presumed Dead
Found Footage
Pentagon Confirms That Leaked Video Is Part of UFO Investigation
Killer Copter
Middle Eastern Nation First to Buy Drone Armed With Machine Gun
More on Robots & Machines
From the Dept. of...
Yesterday on futurism
The Best Exercise Bikes of 2023
It's Nothing Pers...
Thursday on the byte
Scientists Create Shape-Shifting Robot That Can Melt Through Prison Bars
From the Dept. of...
Thursday on futurism
The Best Smart Lights of 2023
READ MORE STORIES ABOUT / Robots & Machines
Keep up.
Subscribe to our daily newsletter to keep in touch with the subjects shaping our future.
+Social+Newsletter
TopicsAbout UsContact Us
Copyright ©, Camden Media Inc All Rights Reserved. See our User Agreement, Privacy Policy and Data Use Policy. The material on this site may not be reproduced, distributed, transmitted, cached or otherwise used, except with prior written permission of Futurism. Articles may contain affiliate links which enable us to share in the revenue of any purchases made.
Fonts by Typekit and Monotype.