Photosynthetic bacteria can be printed on paper and turn light into energy — just like plants do. 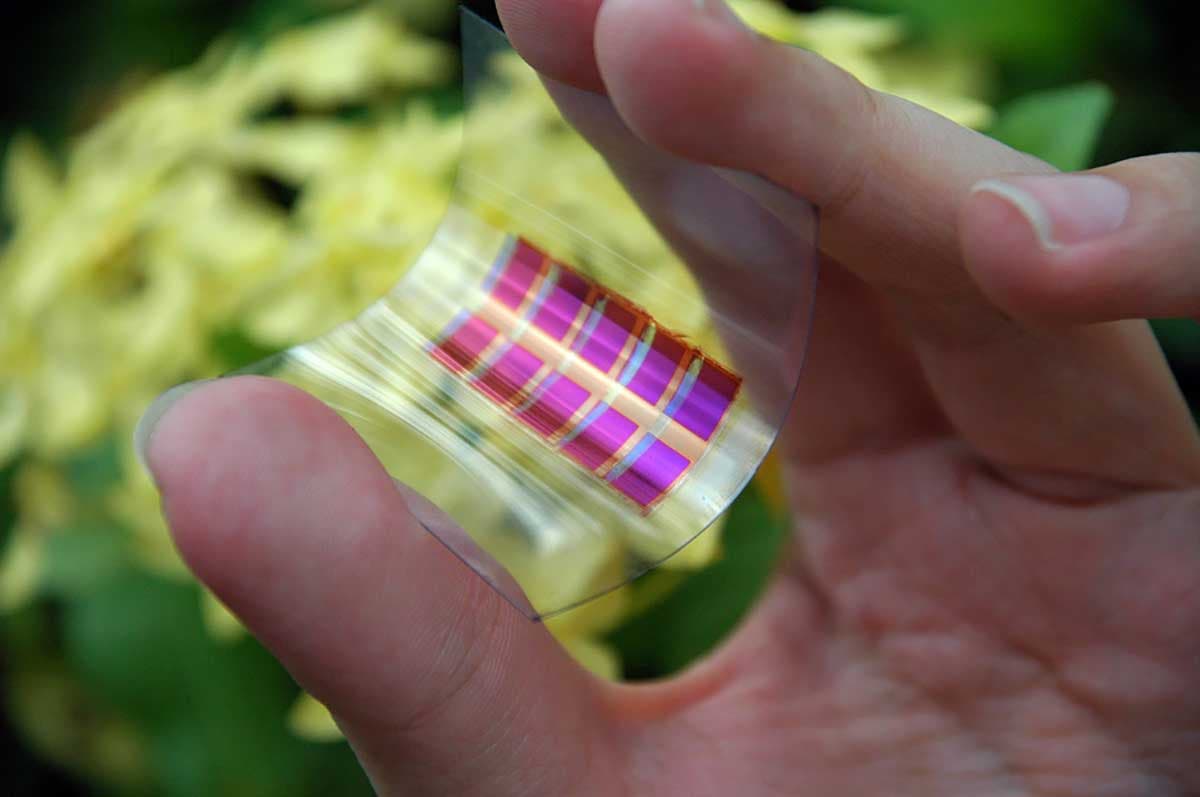 Image by Agency for Science, Technology and Research

Cyanobacteria have been around for billions of years. They manufacture their own food through photosynthesis, absorbing solar light and turning it into energy. Much like plants, they release oxygen in the process, and their presence may have changed our atmosphere so much that bigger creatures could eventually breathe and thrive on Earth. Now, they're being used to create tiny bio solar panels.

These tiny creatures have been used to create a living ink that can be printed on paper and work as bio-solar panels. Researchers at Imperial College London, the University of Cambridge and Central Saint Martins used an inkjet printer to draw precise patterns onto electrically conductive carbon nanotubes, which were also printed on the same surface.

Not only did the resilient bacteria survive the printing process, but produced a small amount of electricity that the team harvested over a period of 100 hours through photosynthesis.

This may seem to be a relatively short lifespan compared to the solar panels we install on our roofs, but "paper-based BPVs [microbial biophotoltaics] are not meant to replace conventional solar cell technology for large-scale power production," Dr. Andrea Fantuzzi, co-author of the study (published in Nature) from the Department of Life Sciences at Imperial College London, said in a statement.

Instead, he explained, they could be used for small devices that require a small and finite amount of energy, such as environmental sensing and wearable biosensors. They are disposable and biodegradable, and they also work in the dark, releasing electricity from molecules produced in the light.

"Imagine a paper-based, disposable environmental sensor disguised as wallpaper, which could monitor air quality in the home. When it has done its job it could be removed and left to biodegrade in the garden without any impact on the environment," Dr. Marin Sawa, a co-author from the Department of Chemical Engineering at Imperial College London, said in a statement.

According to Fantuzzi, the paper-based bio solar panels could be integrated with biosensor technology to monitor health indicators, such as blood glucose level in patients with diabetes. He said that because the new technology is so cost effective, it could "pave the way for its use in developing countries with limited healthcare budgets and strains on resources."

Hazel Assender, Associate Professor at the Department of Materials with the University of Oxford in the UK, told Futurism: "Using bacteria opens up new possibilities [in the field of sensing], but the challenge, as so often, will be selectivity: what is it about the 'atmosphere' that such a sensor might monitor, and how will it react to all the other environmental changes?"

The team agrees that the discovery is, however exciting, just a proof of concept for now, and the next challenge is to make panels that are more powerful and long-lasting. The current bio solar panel unit is small, the size of a palm, and the researchers are confident that it could be scaled up to the size of an A4 sheet of paper.

Read This Next
Solar Slay
Solar Powered Machine Turns CO2 and Waste Plastic Into Valuable Fuel
Hidden City
NYC's Greenery Eats Up All the CO2 From Its Cars, Trucks and Buses "And Then Some"
Futurism
Best Marine Solar Panels of 2023
Brands We Love
Adding Solar Power to Your Home Is Complicated. But It Doesn't Have to Be.
Brands We Love
Are Solar Panels Worth It for Your Home? Here's a Free Way To Find Out.
More on Earth & Energy
Dishonorable Disc...
Yesterday on the byte
Scientists Alarmed by Video of Deep Sea Mining Company Spewing Waste Into Ocean
Save Yourselves
Feb 5 on the byte
Furious Marsupial So Thirsty For Sex That It’s Dying, Scientists Warn
Stem Ware
Feb 3 on the byte
Scientists Discover World's Oldest Preserved Vertebrate Brain
READ MORE STORIES ABOUT / Earth & Energy
Keep up.
Subscribe to our daily newsletter to keep in touch with the subjects shaping our future.
+Social+Newsletter
TopicsAbout UsContact Us
Copyright ©, Camden Media Inc All Rights Reserved. See our User Agreement, Privacy Policy and Data Use Policy. The material on this site may not be reproduced, distributed, transmitted, cached or otherwise used, except with prior written permission of Futurism. Articles may contain affiliate links which enable us to share in the revenue of any purchases made.
Fonts by Typekit and Monotype.