NYC's Greenery Eats Up All the CO2 From Its Cars, Trucks and Buses "And Then Some"

"The scientists saw carbon dioxide levels swing up in the morning in tandem with traffic and other activities, and come down somewhat in afternoon, as grass and trees went to work." 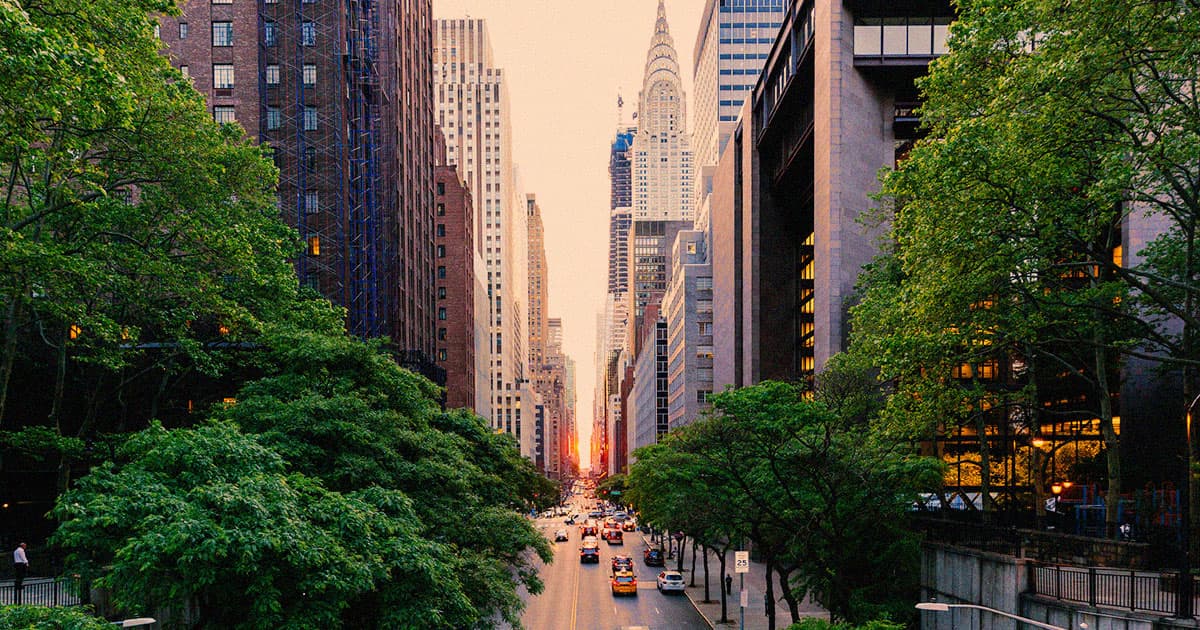 Researchers at New York City's own Ivy League school have discovered that on summer days, the Big Apple's vegetation — most of which exists beyond its major parks — seems to absorb a lion's share of its carbon emissions via photosynthesis.

The environmental scientists from Columbia University and the City University of New York cross-referenced emissions data with new hyper-local vegetation maps, which have imaged for the first time the city's hidden greenery between buildings and on streets that had until recently not been accounted for.

They discovered that "on many summer days, photosynthesis by trees and grasses absorbs all the carbon emissions produced by cars, trucks and buses, and then some," a Columbia Climate School press release declared.

Using that new aerial radar imagery, the scientists were able to see in granular detail minute bits of vegetation, from trees and small gardens in the brownstone backyards to individual foliage on the street. Before, that vegetation was left out of NYC greenery maps, which dealt primarily with the large tracts of grasslands and forests in city parks that only comprise about 10 percent of the five boroughs' total vegetation.

"Most people have assumed that New York City is just a grey box, that it's biogenically dead," Roísín Commane, a Lamont-Doherty atmospheric chemist who co-authored the paper published recently in Environmental Research Letters, said in the school's press release. "But just because there's a concrete sidewalk somewhere doesn't mean there's not also a tree that's shading it."

To figure out how this previously unaccounted-for greenery interacts with NYC's carbon emissions, the research team looked at carbon data from June to August 2018, discovering that in total, the Big Apple emitted 14.7 million tons of carbon dioxide. As huge as that figure is, it's not that much of a shocker given that, as the Columbia press release notes, New York is the largest carbon emitter among cities in the US, and the third-largest in the world.

NYC's CO2 levels would be even higher, the researchers posit, were it not for the city's massive amounts of greenery, with 170 square kilometers of tree canopy cover and 94 square kilometers of grasses. On summer days, when NYC is at its greenest, that vegetation ate up 85 percent of those carbon emissions, their cross-reference analysis found.

"On many summer days, total [carbon] uptake equaled up to 40 percent of a summer afternoon's total emissions from all sources," the press release declares. "The scientists saw carbon dioxide levels swing up in the morning in tandem with traffic and other activities, and come down somewhat in afternoon, as grass and trees went to work."

As incredible as that conclusion is, it has one huge caveat: carbon uptake via photosynthesis only occurs during local growing seasons, which only happen in New York from mid-April to mid-October. In warmer cities, there is likely more carbon uptake from vegetation because growing seasons last longer.

In spite of the seasonal constraints, these conclusions could have huge implications when it comes to natural defenses against carbon emissions.

"There is a lot more greenery than we thought, and that's what drives our conclusion," Columbia postdoctoral researcher and lead author Dandan Wei said in the release. "This tells us that the ecosystem matters in New York City, and if it matters here, it probably matters everywhere else."

Read This Next
Brands We Love
Photosynthesis Is the Strategy Game That Lets You Take Control of a Forest Ecosystem
It'll Buff Out
Humans Produce 100x More CO2 Than All Volcanoes Combined
Climate Crisis
Mayor Announces $10 Billion Plan to Save NYC From Rising Seas
Futurism
How California's Incredible New Solar Panel Law Is Historic for Green Energy
Futurism
The Ozone Layer is Not Recovering and We Don't Know Why
More on Earth & Energy
Save Yourselves
Yesterday on the byte
Furious Marsupial So Thirsty For Sex That It’s Dying, Scientists Warn
Stem Ware
Feb 3 on the byte
Scientists Discover World's Oldest Preserved Vertebrate Brain
From Bad to Worse
Feb 2 on the byte
Global Warming Is Worse Than We Thought, AI Tells Scientists
READ MORE STORIES ABOUT / Earth & Energy
Keep up.
Subscribe to our daily newsletter to keep in touch with the subjects shaping our future.
+Social+Newsletter
TopicsAbout UsContact Us
Copyright ©, Camden Media Inc All Rights Reserved. See our User Agreement, Privacy Policy and Data Use Policy. The material on this site may not be reproduced, distributed, transmitted, cached or otherwise used, except with prior written permission of Futurism. Articles may contain affiliate links which enable us to share in the revenue of any purchases made.
Fonts by Typekit and Monotype.