This Crazy Gadget Helps You "Talk" To Your Computer Without Words

It's like if Siri was stuck to your face. 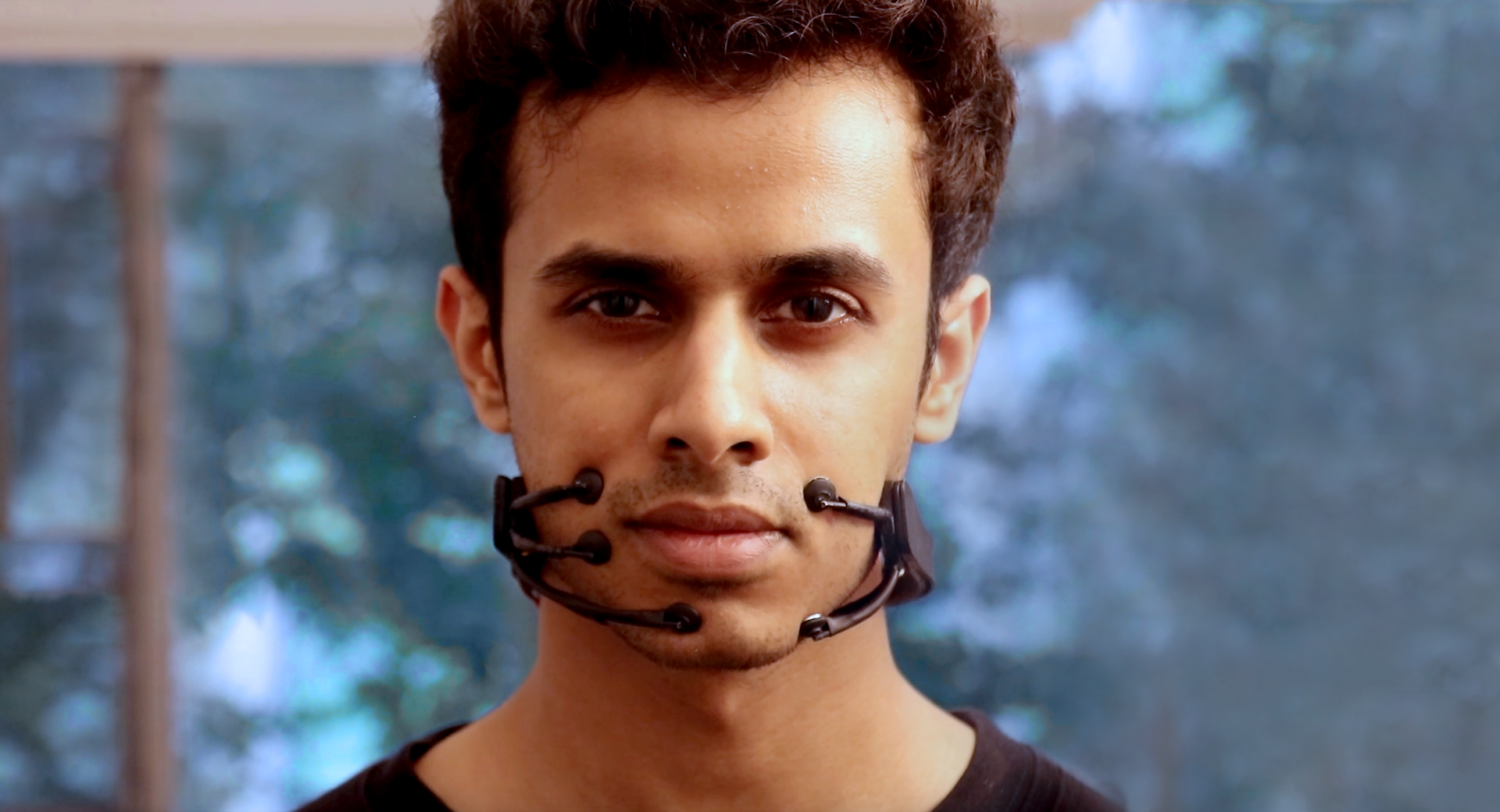 Hey you! Ever wish your technology was more invasive? You love voice-to-text, but it's just too public?

Some researchers at MIT Media Lab have come up with the perfect gadget for you. And it looks like a Bane mask crossed with a squid. Or, if you prefer: like a horror movie monster slowly encompassing your jaw before crawling into your mouth.

The researchers presented their work at the International Conference on Intelligent User Interfaces (yes such a thing exists) in March in Tokyo.

Whenever you think of words, they're silently, imperceptibly, transmitted to your mouth. More specifically, signals arrive at the muscles that control your mouth. And those signals aren't imperceptible to a highly sensitive computer.

The researchers call this device the AlterEgo. It's got seven electrodes positioned around the mouth to pick up these signals. The data that the electrodes pick up goes through several rounds of processing before being transmitted wirelessly to a device awaiting instruction nearby. Oh, and it's got bone-conduction headphones so that devices can respond.

The scientists tested their prototype on a few people who trained the software to recognize the data that corresponded to different commands ("call," "reply," "add,"), then on a few more to see how accurate it was. The results were promising, though it's not exactly ready to go into mass production.

The closest comparison to this system is a device you can address in your normal speech, like Siri or Alexa. But, terrifyingly, this is not scientists' first attempt at creating a more direct way to transmit our thoughts to computers. Most earlier versions have relied directly on brain signals (from devices laid over or implanted in the brain. No thank you).

AlterEgo has the following advantages, according to the researchers:

I admit, in some situations a device like this might be useful. Particular movements could tell your phone to turn on music, or use a calculator, or text your friend. It could control your "smart home," turning off the oven or starting the coffeepot with a mere twitch. Heck, in 10 years, I could be thinking this article into existence. This goes double for people with disabilities or vision problems that might make controlling a digital device challenging otherwise.

BUT. But. There are a few things that might make AlterEgo less than ideal. The electrodes can't shift when a person is using them, for example, or the reading will get all messed up. It's hard to imagine that people would be comfortable hanging out with a device covering half their mouths. And there's no telling how the system would do in real-world settings — that's what the researchers have to test out next. And, of course, there's the issue of crossed signals, like when Alexa thought random sounds were telling it to laugh. And — just thinking big for a second — if it were hacked, could the hacker use the electrodes to physically control your mouth?

Might we have a future in which our faces butt-dial for us? Who's to say. But you can bet all the people in my nightmares of a dystopian future are equipped with one of these bad boys.

Read This Next
From Our Partners
Build Your Own Internet Of Things With 98% Off These Arduino Training Classes
From Our Partners
Make Amazing DIY Tech With 75% Off This ESP32 Training Package
From Our Partners
Stock Up On The Educational Courses You Won't Find On Amazon Prime Day
Personality Construct
Gaming CEO: Brain Interfaces Will Allow Us to Edit Our Feelings
Raspberry Pi-rade
Learn How the Internet of Things Works with These Raspberry Pi Classes
More on Sci-Fi Visions
Human v. Giraffe
Tuesday on the byte
Chaotic Italian Fashion Line Baffles Facial Recognition Software
Step One
Tuesday on the byte
World’s Third Richest Person Says He’s Developed "Addiction" to ChatGPT
FROM THE DEPT. OF...
Tuesday on futurism
The Best Places to Buy A Laptop in 2023
READ MORE STORIES ABOUT / Sci-Fi Visions
Keep up.
Subscribe to our daily newsletter to keep in touch with the subjects shaping our future.
+Social+Newsletter
TopicsAbout UsContact Us
Copyright ©, Camden Media Inc All Rights Reserved. See our User Agreement, Privacy Policy and Data Use Policy. The material on this site may not be reproduced, distributed, transmitted, cached or otherwise used, except with prior written permission of Futurism. Articles may contain affiliate links which enable us to share in the revenue of any purchases made.
Fonts by Typekit and Monotype.