Transparent Solar Panels Are "The Wave of the Future"

Combined with traditional solar panels, they could meet nearly 80 percent of the country's energy demand. 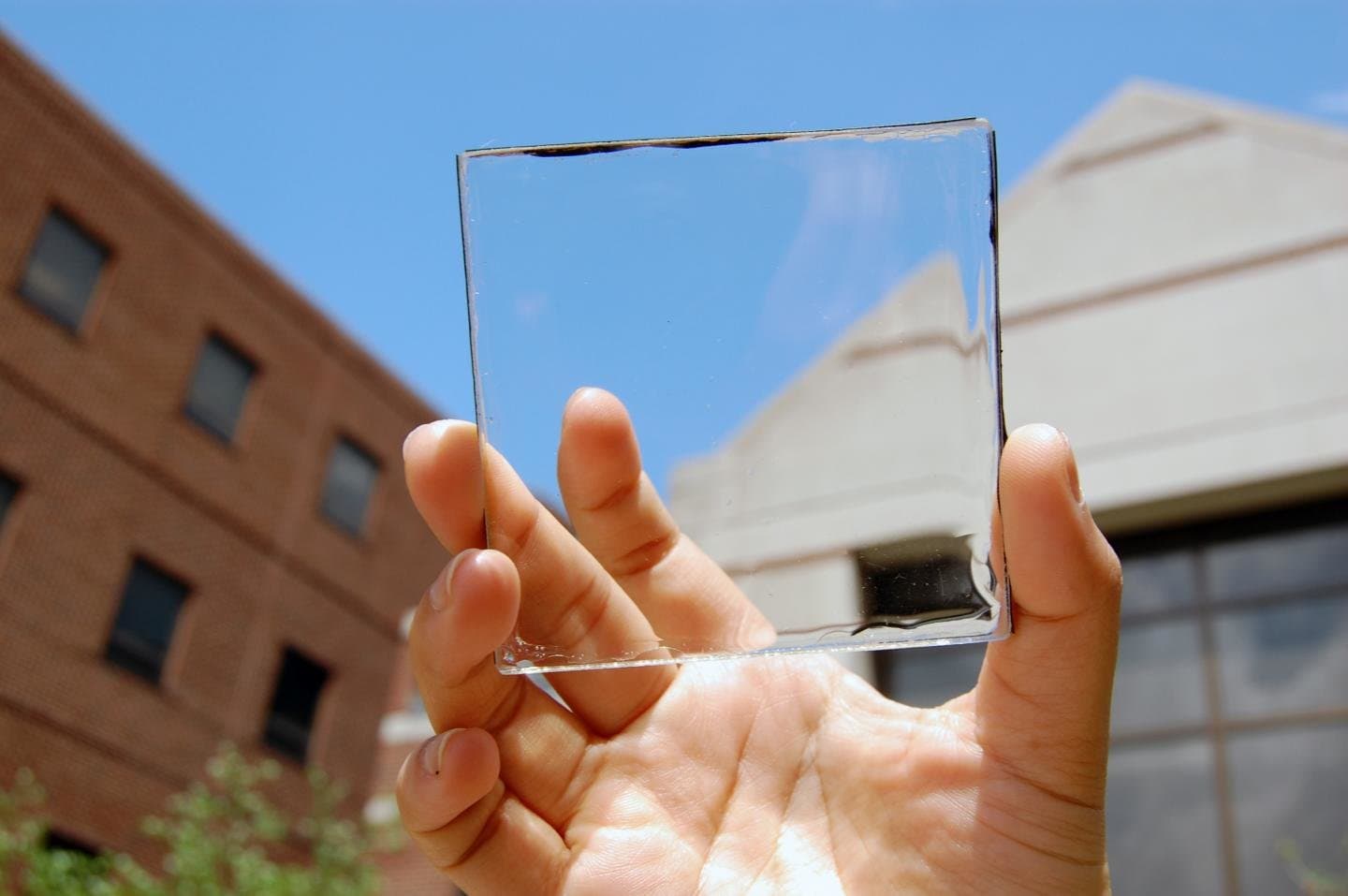 Solar panels and solar power-generating windows are a couple of things people have come up with to take advantage of the Sun, but now a team of engineering researchers from Michigan State University (MSU) have proposed the use of transparent solar panels. Combined with rooftop panels, our reliance on fossil fuels could be greatly reduced and we'd be close to meeting the United States' high electricity demand.

Led by Richard Lunt, the Johansen Crosby Endowed Associate Professor of Chemical Engineering and Materials Science at MSU, the team created a transparent luminescent solar concentrator that could generate solar energy on any clear surface without affecting the view. In theory, it could be applied to cell phones, windows, buildings, and cars.

"Highly transparent solar cells represent the wave of the future for new solar applications," said Lunt. "We analyzed their potential and show that by harvesting only invisible light, these devices can provide a similar electricity-generation potential as rooftop solar while providing additional functionality to enhance the efficiency of buildings, automobiles and mobile electronics."

Currently, according to Lunt and his team, only 1.5 percent of electricity in the U.S. is generated by solar power. Transparent solar panels, however, could account for 40 percent of electricity, provided its used on the 5-7 billion square meters of glass surface in the country — something that's unlikely to happen anytime soon.

Before they can even be considered, they need to be more efficient. Compared to solar panel's 15 percent efficiency, transparent panels are only 5 percent efficient. Despite this, Lunt states that transparent panels are only about a third of the way into their full potential after five years' research. Going forward, work will be done to improve the panel's capabilities, though they're not expected to outperform or replace the traditional solar panels we've become accustomed to.

"Ultimately, this technology offers a promising route to inexpensive, widespread solar adoption on small and large surfaces that were previously inaccessible," added Lunt.

Read This Next
Fusion Futility
Elon Musk Slams Fusion, Says Future of Energy Is Wind and Solar
Brands We Love
Adding Solar Power to Your Home Is Complicated. But It Doesn't Have to Be.
Black Phase
Materials Breakthrough Could Lead to Cheaper, Better Solar Panels
Brands We Love
Are Solar Panels Worth It for Your Home? Here's a Free Way To Find Out.
Brands We Love
Wondering if Solar Energy Is Right for Your Home? Find Out for Free.
More on Earth & Energy
Sun Shield
Nov 23 on futurism
Scientists Increasingly Calling to Dim the Sun
Oversharing 101
Nov 21 on the byte
Bill Gates Reflects on Drinking Product of Fecal Sludge
Battery Powered
Nov 17 on the byte
Startup Says It's Building a Giant CO2 Battery in the United States
READ MORE STORIES ABOUT / Earth & Energy
Keep up.
Subscribe to our daily newsletter to keep in touch with the subjects shaping our future.
+Social+Newsletter
TopicsAbout UsContact Us
Copyright ©, Camden Media Inc All Rights Reserved. See our User Agreement, Privacy Policy and Data Use Policy. The material on this site may not be reproduced, distributed, transmitted, cached or otherwise used, except with prior written permission of Futurism. Articles may contain affiliate links which enable us to share in the revenue of any purchases made.
Fonts by Typekit and Monotype.