The family vacation is getting more environmentally friendly. 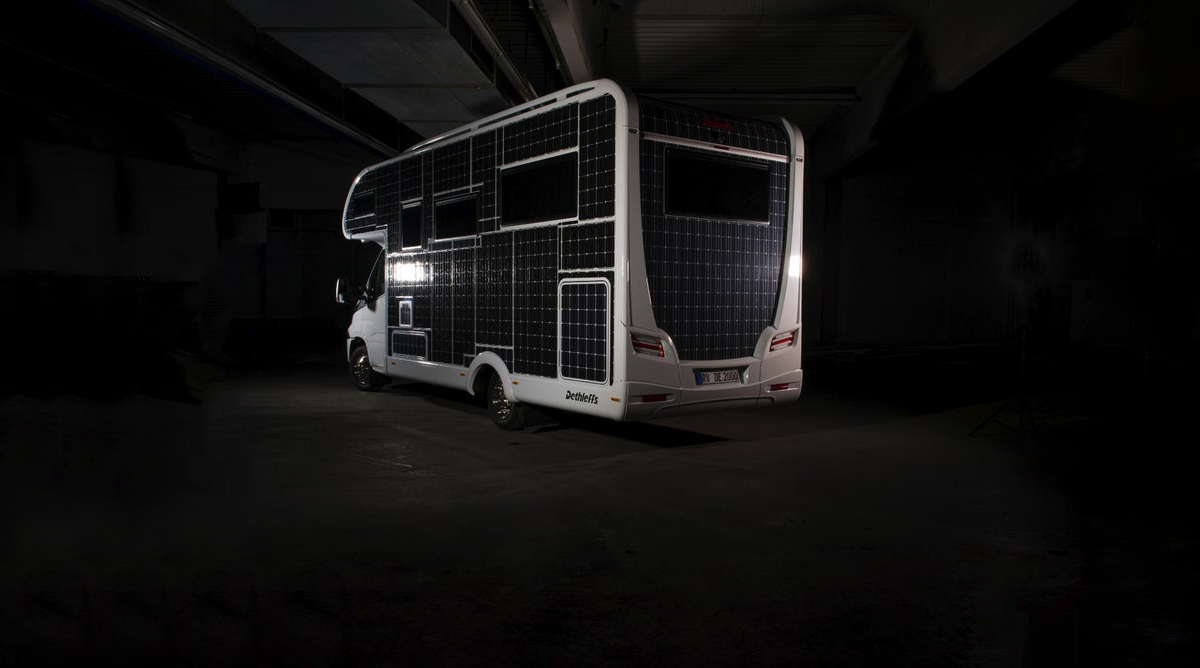 Electric cars are already poised to take over our roads, but anyone looking to buy a motorhome is still stuck with only fossil fuel-powered options. That could soon change thanks to Dethleffs.

The German motorhome manufacturer has just unveiled their e.home concept. The exterior of this futuristic RV is blanketed in 31 square meters (334 square feet) of solar panels, generating electricity to help fuel the vehicle's electric powertrain. Its electric 80-kilowatt (107-horsepower) motor can be paired with several battery options.

According to Dethleffs, the e.home's maximum range is 280 kilometers (174 miles) rated on the New European Driving Cycle, while an EPA rating would likely put it closer to 225 kilometers (140 miles). However, both of those ranges are set without hauling weight. Dethleffs claims a fully outfitted e-home that's hauling weight would have an estimated range of 165 kilometers (103 miles).

The battery pack lasts for approximately 1,500 charges — about 250,000 kilometers (155,000 miles) — before needing replacement. The e-home supports both level 2 and DC fast-charging, and the solar panels provide 3 kilowatts of supplementary battery-charging electricity.

The Dethleffs e.home also maximizes efficiency by using phase-change materials to absorb heat and release it throughout the day as ambient temperatures fluctuate. Infrared panels throughout the inside of the vehicle also provide a comfortably warm atmosphere.

The electric motorhome is just one example of vehicles other than cars going electric.

Tesla's electric semi will undergo a test drive in October, and Cummins has already revealed their own electric semi. Boatmaker Hinckley Co. just revealed the first fully electric luxury yacht in the world, which can reach up to 43 kph (27 mph) and has a range of 64 kilometers (40 miles). Meanwhile, Eviation Aircraft has unveiled an all-electric, zero-emissions prototype aircraft that has a range of 965 kilometers (600 miles) for up to nine passengers.

Indian Railways, the largest rail network in Asia, rolled out a Diesel Electric Multiple Unit (DEMU) train with a solar-paneled roof in July, and they plan to add 24 more trains to their fleet soon. The rail company estimates that they could save as many as 21,000 liters of diesel annually by attaching solar panels to six coaches on a train.

According to the Environmental Protection Agency (EPA), the transportation sector accounts for 27 percent of the United States' greenhouse gas emissions. The European Global Commission for Climate Change states that the airline industry alone produces more than two percent of total global emissions, enough to earn it a place on the “top 10 emitters” list if the industry was a country.

As a whole, the global transportation sector produces 14 percent of emissions worldwide. Clearly, if electric concept vehicles continue to flourish, the environment stands to benefit substantially.

Read This Next
Remember Donald?
Donald Trump Goes on Bizarre Rant Against Electric Cars
Piercing The Hype
If Graphene Batteries Do Everything Scientists Say, They Could Be a Gamechanger
End of the Road
Volkswagen Will Launch Its Last Gas-Powered Cars in 2026
Electric Assist
China Forces Tesla and Other EV Makers to Turn Over Driver Data
Futurism
EVs Can't Change the World Until We Change How We Sell Them
More on Earth & Energy
Stem Ware
Yesterday on the byte
Scientists Discover World's Oldest Preserved Vertebrate Brain
From Bad to Worse
Thursday on the byte
Global Warming Is Worse Than We Thought, AI Tells Scientists
RIP Fred
Thursday on the byte
Instead of Predicting Length of Winter, Groundhog Simply Dies
READ MORE STORIES ABOUT / Earth & Energy
Keep up.
Subscribe to our daily newsletter to keep in touch with the subjects shaping our future.
+Social+Newsletter
TopicsAbout UsContact Us
Copyright ©, Camden Media Inc All Rights Reserved. See our User Agreement, Privacy Policy and Data Use Policy. The material on this site may not be reproduced, distributed, transmitted, cached or otherwise used, except with prior written permission of Futurism. Articles may contain affiliate links which enable us to share in the revenue of any purchases made.
Fonts by Typekit and Monotype.