Nothing he said made any sense at all. 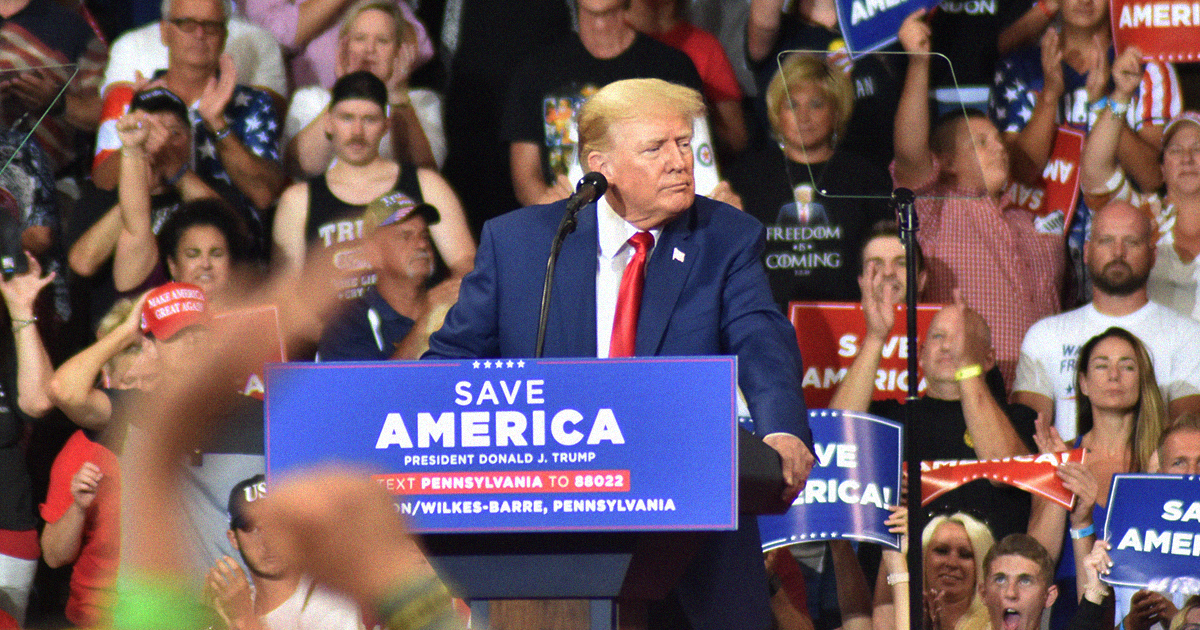 Over the weekend, former US president and noted reality TV star Donald Trump went on an unhinged rant about electric cars, presumably to pander to a group of die hard followers in Pennsylvania.

His peculiar conclusion? We should get "rid of this stuff," because charging infrastructure is still lacking in the country. If you're scratching your head, us too.

It's a bizarre perspective that serves to remind us that large swathes of the United States still see the electric car as a pointless and expensive replacement of the gas-guzzling automobile, even if that outlook seems increasingly dated in the era of Tesla and increasingly widespread adoption.

Trump's comments also just didn't make any sense. Case in point, he reminded the audience that gas prices were much lower during his tenure. Following that logic, though, in the face of soaring energy prices, why undermine the electric car if it serves as a much cheaper alternative?

Then there's the fact that the US is a global leader when it comes to manufacturing EVs, as Electrek points out, something that certainly should fall under Trump's purported efforts to "save America."

Trump also used his time behind the microphone to tell a confusing and incoherent story about a friend, who complained about having to stop during a road trip to charge his car.

This "friend" was only "getting like 38 miles per gallon," which is almost half of the least efficient EV currently on the market, according to Electrek — assuming, of course, Trump was actually talking about MPGe, or "miles per gallon of gasoline-equivalent," the EV equivalent of miles per gallon.

Sure, EV charging infrastructure is far from where it needs to be in the country. Many chargers still rely on outdated technology that only offer a slow trickle of electricity.

That means, for longer road trips, charging may still prove to be a problem. But the obvious solution is to invest in infrastructure, something that the Biden administration is actively pushing for.

In short, calling for electric cars to be banished is not only counterproductive, but a huge waste of time as well.

Was Trump responding to recent comments made by Tesla CEO Elon Musk, who called for Trump to "hang up his hat and sail into the sunset," arguing he was too old to run again 2024, earlier this year?

As has always been the case, attempting to decipher Trump's latest outbursts into coherent thoughts is probably a fool's errand.

If the last couple of years have demonstrated one thing, it's the fact that EVs are almost certainly here to stay — so why not get ahead of the problem and proactively attempt to fill any gaps in EV infrastructure? The tech exists, even if it hasn't made it to all parts of the country yet.

Besides, Trump himself was a fervent supporter not too long ago.

Read This Next
Fusion Futility
Elon Musk Slams Fusion, Says Future of Energy Is Wind and Solar
Dry Dock
The Top 13 Wildest Objects That Terrible Droughts Have Revealed
Harambe 2.0
Freya the Boat-Climbing Walrus Euthanized Because of Stupid Humans
The Kids Won't Be Alright
Elon Musk Warns That Humankind Will "End Up in Adult Diapers"
Mine! Mine!
Elon Musk Suggests Tesla Might Start Mining Lithium
More on Earth & Energy
Dishonorable Disc...
Yesterday on the byte
Scientists Alarmed by Video of Deep Sea Mining Company Spewing Waste Into Ocean
Save Yourselves
Feb 5 on the byte
Furious Marsupial So Thirsty For Sex That It’s Dying, Scientists Warn
Stem Ware
Feb 3 on the byte
Scientists Discover World's Oldest Preserved Vertebrate Brain
READ MORE STORIES ABOUT / Earth & Energy
Keep up.
Subscribe to our daily newsletter to keep in touch with the subjects shaping our future.
+Social+Newsletter
TopicsAbout UsContact Us
Copyright ©, Camden Media Inc All Rights Reserved. See our User Agreement, Privacy Policy and Data Use Policy. The material on this site may not be reproduced, distributed, transmitted, cached or otherwise used, except with prior written permission of Futurism. Articles may contain affiliate links which enable us to share in the revenue of any purchases made.
Fonts by Typekit and Monotype.