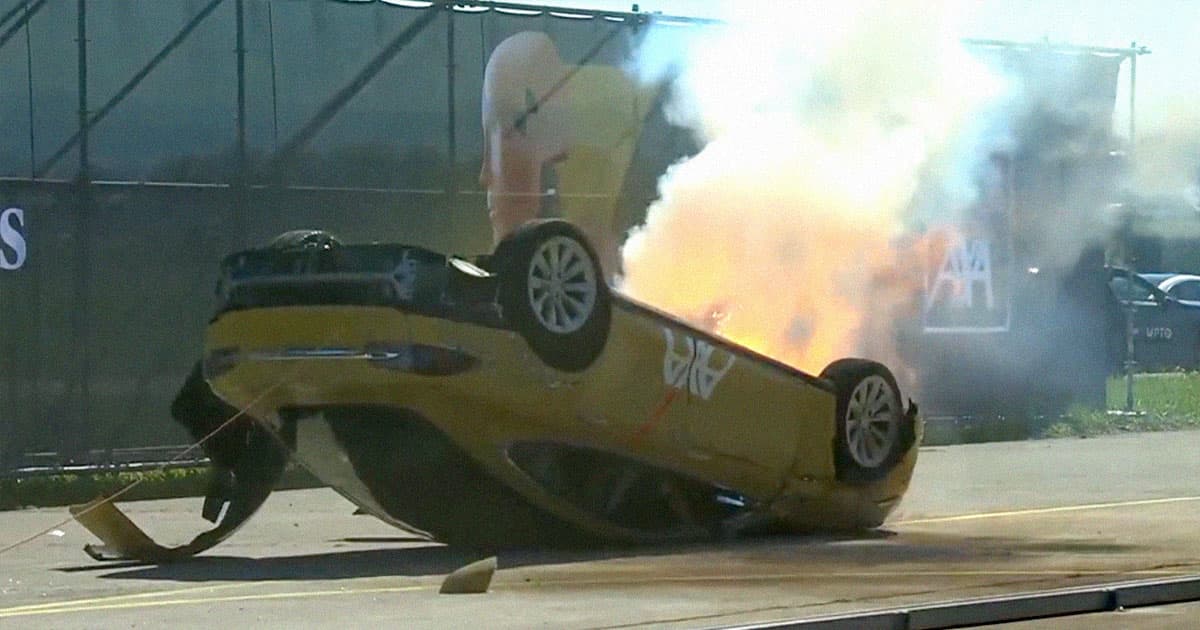 This is just embarrassing.

This is just embarrassing.

There are a number of dead giveaways that the video was staged. The clip shows a Model S being sent off of a ramp to gently flip it onto its back — at which point it ignites in a suspicious jet of smoke and fire.

The company later fully admitted the video was staged with pyrotechnics. In fact, in one of the more ridiculous attempts we've seen of companies going after electric vehicle tech, the batteries were reportedly removed completely.

Sure, EV fires do happen in rare instances. But the mere fact that a car insurance company attempted the stunt only makes it all the more questionable.

The insurer AXA set up this incredible demonstration of a Tesla scraping its battery and bursting into flames.
The only problem was... it was 100% staged and 500% bizarre. For audience safety, they removed the battery and... installed pyrotechnics.
What a weird timeline we're in. pic.twitter.com/M3er4ML3ep

AXA only had a weak excuse for staging the stunt: setting off a car battery was too dangerous and they wanted to make sure a "battery fire" would happen by fitting the Model S with pyrotechnics.

"For further context: During the actual AXA-Crash test the Tesla's undercarriage was heavily damaged," a caption of a follow-up video reads. "According to the AXA researches this could lead to a battery fire in certain cases."

"In this specific demonstration this was not the actual cause of fire," the caption reads. "According to the press office of AXA, the fire itself was staged by means of pyrotechnics as they did not want to risk a real battery fire at an event with 500 spectators for safety reasons."

It's true that there have been a number of collisions involving Teslas that have led to devastating fires, some of which have proven to be tricky to put out. But this whole demonstration just seems like theatrics.

Regardless of the risks involved, having an insurance company mislead the public about the dangers of driving an electric car is a terrible look.

More on Tesla: Why These Tesla Owners Are Going on a Hunger Strike Against Tesla