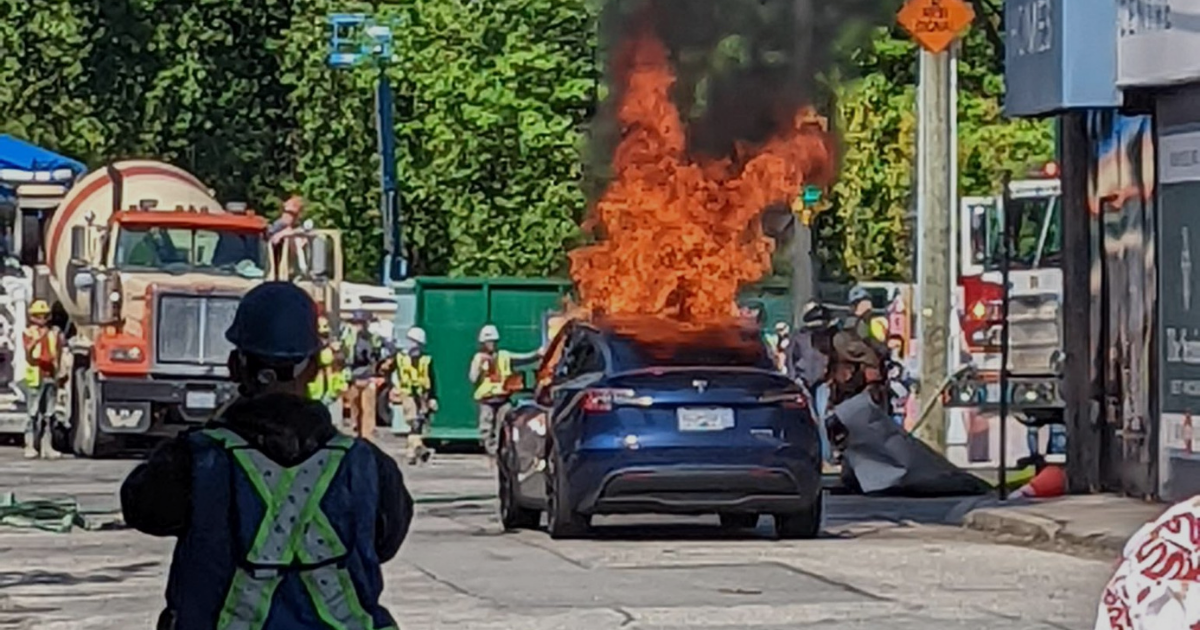 Tesla owner Jamil Jutha had only owned his Model Y for eight months before it caught on fire Friday and briefly trapped him inside, according to a CTV News report published yesterday.

Jutha was driving in Vancouver that morning when the car completely turned off and lost all power to its electronics.

The car started to smoke, pouring through the vents into the cab. Naturally, Jutha panicked and says he kicked out a window in order to escape. The man said he felt panicked and immediately called 911 for help. While waiting for them to arrive, local constructions workers at a site nearby safely directed traffic around the man's burning car.

"We're very fortunate that this individual had the wherewithal and the strength to kick the window out,” firechief Brian Hutchinson of North Vancouver Fire and Rescue Services told CTV.

An anonymous Twitter user captured an image of the moment that's since gone viral, showing hot orange flames erupting from the car's hood and cab.

Watched a @Tesla catch on fire this morning. As soon as it started smoking the electrical system locked trapping the guy inside. Luckily construction workers broke the window so he could escape. Neat feature pic.twitter.com/9OHoP9mWbe

The accident is under investigation and firefighters are trying to figure out what exactly went wrong with the car, and Tesla did not respond to CTV's request for comment.

Jutha, however, says the emergency protocol for opening the door in an electrical failure isn't intuitive and he encourages other Tesla owners to familiarize themselves with what to do should the same happen to them. CTV says the entire door panel is a lever that lifts up in emergency circumstances, and one Twitter used pointed out that a video on how to use it is about ten minutes long.

It's not the first time Tesla vehicles have been involved in dangerous accidents or generally made outrageous, driverless decisions, but we're glad the man is safe.

More on Tesla news: After Sexual Allegations, Elon Musk Jets Off to Brazil