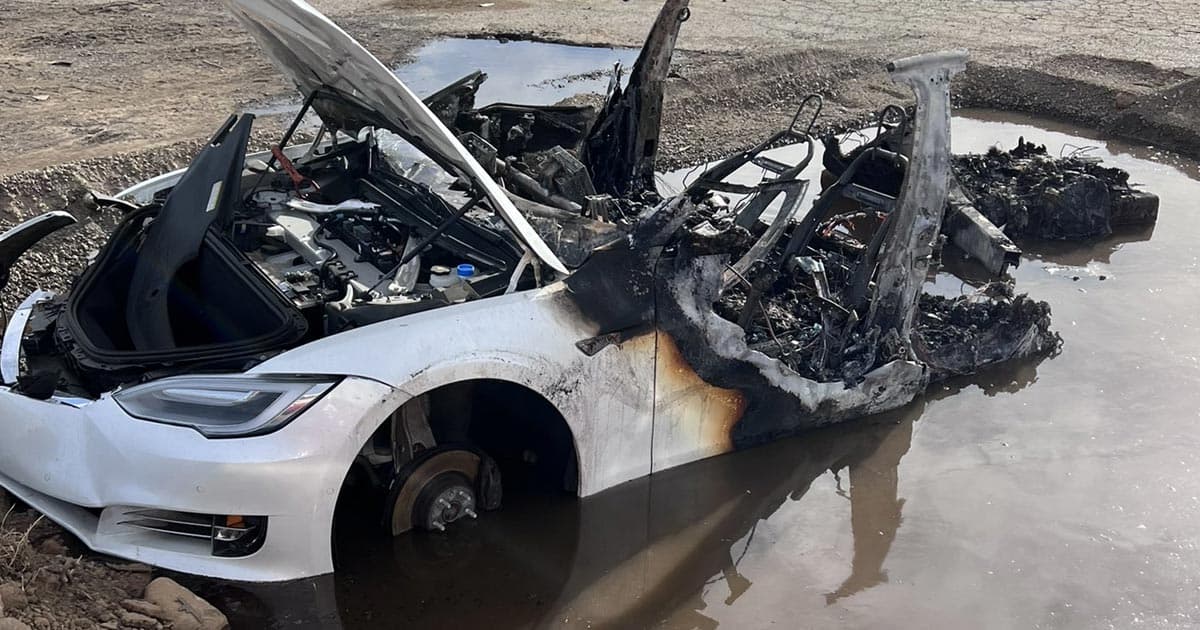 Image by Metro Fire of Sacramento

As Sacramento's KCRA reports, the Tesla blaze was a first for the city's firefighting department, and a confusing first at that — both because water alone wouldn't put out the battery fire, and because the car had been sitting in a junkyard for three weeks, which would random a conventional gas-powered automobile absolutely inert.

In a tweet that included video of the fire, the Sacramento Metro Fire District said that the Tesla was sitting in a junkyard when they were called to the scene, and although the department's crews "knocked the fire down," it kept on reigniting.

Crews arrived to our first Tesla fire. It was involved in an accident 3 wks ago, and was parked in a wrecking yard. Crews knocked the fire down but it kept reigniting/off-gassing in the battery compartment. Crews created a pit, placed the car inside, and filled the pit with water pic.twitter.com/Lz5b5770lO

It took the firefighters "a significant amount of time, water, and thinking outside the box to extinguish," the SMFD wrote in a Facebook post of the junkyard Tesla fire. With the help of scrap yard workers, they were able to flip the car over and begin trying to extinguish the fire from the battery compartment on its undercarriage. Still, they wrote, "even with direct penetration, the vehicle would still re-ignite due to the residual heat."

For what it's worth, that's pretty much exactly what Tesla recommends that first responders do when one of its vehicles catches on fire. The fact that it was still a news-making issue underlines a touchy issue with electric vehicle popularization: that it's great environmentally to get them on the roads, but that same popularity is going to create new challenges for emergency personnel.

They were finally able to fully extinguish the fire after the firefighters and junkyard workers "created a small pit, placed the car inside it, and filled the pit with water," which submerged the battery compartment, the SMFD's Facebook post noted.

Though this is a particularly egregious example, electric vehicle battery fires are far from a new phenomenon.

In 2019, at least three parked Teslas that caught fire within a month's time. And that's without getting into the many Teslas that catch fire while charging.

The next year, Insider revealed that Tesla knowingly sold cars with faulty batteries as a cost-cutting measure. That's particularly significant because the aluminum used on those corner-cut Model S vehicles is both particularly susceptible to cracking, so when the aluminum cracked and coolant began spilling into the lithium ion battery packs, it would eat away at the cars' batteries and sometimes explode.

While we don't know for sure what year or model the Tesla in the Sacramento junkyard fire was, it's nevertheless alarming that this is still happening two years after it was revealed that the company knowingly sold cars with flammable batteries — and a bad omen for the future of these cars that sometimes just explode for no reason.

Read This Next
It Was the Tesla
Manslaughter Case Has a Strange Twist: Tesla That Killed Couple Was on Autopilot
Xxplosive
Electric Bikes Have a Small Problem: They Keep Bursting Into Flames
Full Self-Delusion
Survey: 42% of Tesla Autopilot Drivers Think Their Cars Can Entirely Drive Themselves
Musk Antics
Elon Musk Has a Big Problem on His Hands
Please Elon
Why These Tesla Owners Are Going on a Hunger Strike Against Tesla
More on Advanced Transport
Pepsi Semi
Dec 2 on the byte
Tesla Semi Truck Drives 500 Miles Fully Loaded
Out With a Bang
Nov 29 on the byte
Driver Says His Ford F-150 Lightning Made a "Loud Boom" and Died When He Plugged It In
Deep in a Hole
Nov 29 on the byte
Something Very Weird Is Going on at Elon Musk's Boring Company
READ MORE STORIES ABOUT / Advanced Transport
Keep up.
Subscribe to our daily newsletter to keep in touch with the subjects shaping our future.
+Social+Newsletter
TopicsAbout UsContact Us
Copyright ©, Camden Media Inc All Rights Reserved. See our User Agreement, Privacy Policy and Data Use Policy. The material on this site may not be reproduced, distributed, transmitted, cached or otherwise used, except with prior written permission of Futurism. Articles may contain affiliate links which enable us to share in the revenue of any purchases made.
Fonts by Typekit and Monotype.