If Graphene Batteries Do Everything Scientists Say, They Could Be a Gamechanger

They hold way more power. They charge almost instantly. What's taking so long to get them out there? 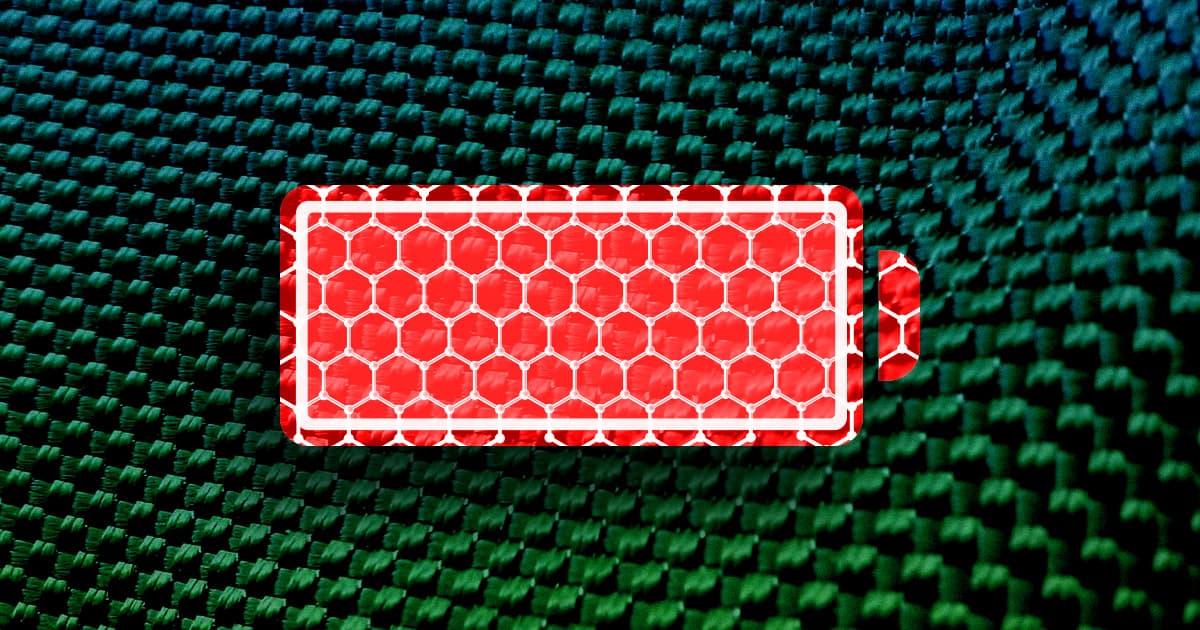 Imagine you’re cruising down the freeway in your new electric car, equipped with the latest graphene battery. You notice you’re running low on juice, so you pull over at a rest stop, plug it in, and head inside to grab a pizza.

By the time you’re done and back outside, your car is already nearly charged — and ready for another uninterrupted 300 miles.

This is the future of transportation that certain starry-eyed scientists promise is coming soon. They say that by superpowering batteries with graphene — a sheet of carbon just one atom thick — everything from power tools to electric cars will charge faster, hold more power, cost less, and maybe even help civilization finally move away from planet-destroying fossil fuels. And these marvelous batteries could start to roll out, they say, by sometime next year.

“Graphene is an amazing material, and it’s particularly amazing as a material for batteries,” Chip Breitenkamp, a polymer scientist and VP of business development at the graphene battery company NanoGraf, told Futurism. The tech, he said, can “make batteries charge faster and dissipate heat more effectively. This has big implications. It means power tools don’t overheat as quickly. It means home appliances serve families better, longer. And it eventually means [electric cars] can charge faster.”

The rapid charging isn’t the only selling point. In the lab, NanoGraf says its graphene batteries show a 50 percent increase in run time compared to conventional lithium-ion ones, a 25 percent drop in carbon footprint, and half of weight needed to provide the same output.

The basic idea comes down to chemistry. Over the course of decades, battery makers came to embrace lithium over silicon because it has a high electrical capacity. But lithium has two key problems. It conducts electricity poorly and tends to physically deform as it discharges, ultimately shearing and cracking. Mixing or coating the lithium with graphene — or, most recently, related nanomaterials like graphene oxides and reduced graphene oxides — solves both issues. Graphene is highly conductive, allowing electricity to flow, and rigid, so it helps the lithium keep its shape, allowing the battery to last longer.

“Graphene has very high electronic conductivity, so when you put it in your silicon anode, the conductivity really goes up,” Christos Athanasiou, an engineer at Brown University who’s published research on graphene batteries, told Futurism. “And graphene has really good mechanical properties — it’s really, really strong. So when you have the anode expanding, the graphene essentially hinders these volume variations, so it doesn’t allow the silicon anode to expand that much so it will not break.”

Another benefit: Because the graphene’s sturdiness grants batteries so many more life cycles than a conventional battery, advocates say, they can “push” them harder and charge them faster with a more powerful electric current. They’ll degrade more rapidly, but their abundance of discharge cycles still grants them a longer lifetime than conventional batteries.

Nanograf isn’t the only startup that says it’s homing in on a practical graphene battery. Samuel Gong, the CEO of competitor Real Graphene, told Futurism that he believes his company’s tech could charge a car in well under an hour.

“We also have a bigger budget of life cycles that we can sacrifice because people don’t usually keep their products more than a few years, most likely,” Gong said. “A graphene battery can take a lot more punishment in a sense, which enables that extra life cycle. We can push it a lot harder.”

The result, he says, is a cheap battery with vastly increased energy density and performance.

“I believe [graphene batteries are] just as important to the evolution of technology as compared to something like plastic,” Gong said, “where in the future it could be applied to almost everything.”

The promises are enormous, but at the same time, specific claims can start to look fuzzy. Nanograf says it’s already working with a power tool company and a company that makes batteries for electrical vehicles to bring its technology to market, but said it couldn’t name specific partners.

And Gong told us that Real Graphene is already piloting buses powered by Graphene batteries in Shanghai, China — but when we asked for details about the program, like who’s running the buses and whether the batteries are living up to their imposing technical promises, he declined to comment.

In a bigger sense, graphene was first isolated in 2004. Why the big push to put it into everything now?

“The last 15 to 20 years, basically the whole energy storage community has been doing a lot of work on how to make a good nanocomposite material, how to make this silicon graphene anode have the desired properties,” Athanasiou said. “So, recently in the last years, it became easier to make graphene, and there are other nanomaterials based on graphene, like graphene oxide.”

In other words, graphene has been in a perpetual state of “just about ready to revolutionize the world” for years. But with manufacturing costs trending downward, multiple startups told Futurism that their batteries will be for sale in small devices like power tools as early as next year. After that, they plan to get even more ambitious.

“The batteries that go into EVs require extremely long test cycles,” Breitenkamp from NanoGraf told Futurism. “So, you can imagine, those batteries have to be tested for three to four years at a minimum. It’s not about getting our technology to work in an EV right now. We fully believe that it would, but it’s a matter of all the validation necessary to getting into an EV.”

“It’s not a matter of whether it works, it’s a matter of how long it takes before it gets the thumbs up on things like safety and longevity,” Breitenkamp added.

It’s possible that graphene batteries are attracting interest beyond the startup community. In fact, several experts interviewed for this story speculated that Tesla may secretly be experimenting with the same technology — though all of them emphasized that the theory was just conjecture.

“I have no doubt that Tesla is working on this kind of technology,” Gong said, adding that building powerful enough chargers might be a bigger challenge than making graphene batteries themselves.

“Probably they will, but all these things are super confidential,” Athanasiou said. “Nobody outside the company would really know.”

Tesla, which recently disbanded its entire public relations department, didn’t acknowledge Futurism’s questions or request for comment. But regardless of whether Tesla is working on graphene batteries, there are numerous technical challenges that need to be solved before they would be useful as a consumer product.

One practical issue, Gong said, would be that if a large automaker succeeded in developing market-ready graphene batteries, the enormous draw of charging would run the risk of completely overwhelming the electrical infrastructure.

“The power grid can barely even handle what we have right now, at least when we talk about the Bay Area. It’s just something I can’t really see happening just because it’s just so much power,” Gong said. “It’s not just building a nuclear plant and saying we have the power. It’s also the power delivery: whether the wiring of the city can even handle that surge in power.”

There are also, everybody admits, still technical problems that need to be solved. One, Breitenkamp said, is that pushing batteries too hard can cause problems like dendritic creep — essentially an internal short circuit. But multiple experts told Futurism dendritic creep can be solved with, you guessed it, more graphene.

Even if plopping in more graphene blocks dendritic creep, though, there are lingering manufacturing issues. Different companies use different tricks to actually coat or implement batteries in graphene, but consistency is a challenge regardless of the methodology.

Long story short, Athanasiou said, scientists can make really good prototypes in the lab — but moving into the mass production of finished products is an entirely separate challenge.

“What I can tell you is that the science is there,” Athanasiou said. “However, technology-wise, it’s not ready yet. We know how to make these nanocomposite silicon graphenes, but how we can make them reproducible — that’s a big challenge.”

And, of course, there’s the hype that’s been pushing graphene forward and sustaining interest in it since its discovery. It’s been turned into jackets, touted as a source of infinite electricity, and even as a way to instantly desalinate water.

Part of that is the necessity of scientists needing to drum up interest in their work, said Greg Less, the technical director of the University of Michigan Energy Institute’s Battery User Laboratory. But he also said that he’s not sure how useful graphene batteries will end up being. Graphene isn’t Less’s specific expertise, he made clear, but he’s suspicious that it might fade away as another fad.

He cited carbon nanotubes — the “miracle material” of yesteryear — as an example. Carbon nanotubes are basically just pieces of graphene rolled up into tubes, and many bold claims were made about how it would revolutionize society as well.

In a nutshell, the hype surrounding graphene obscures its future. Separating real utility for the nanomaterial from well-intentioned endeavors that will ultimately fall short is difficult. But we need to clean up our environmental act somehow, and if we want to stave off the most devastating impacts of climate change then we may end up needing a long-shot Hail Mary or two. If even a fraction of what graphene advocates say is possible ends up happening, it’ll indeed be a valuable weapon in the fight against fossil fuels.

“We’re just excited to see electrification become a reality,” Breitenkamp said of graphene’s potential to revolutionize electric cars. “For the last ten years, it’s kind of seemed in the aether. Being able to make a car that’s affordable enough to put in everyone’s garage is going to shift a lot of things. It’s going to shift the narrative on climate change and even jobs.”

More on clean energy: Sugar, Light, And A New Type of Chemistry — What It May Take To Wean Us Off Fossil Fuels