Instantly deployable power with the potential to hasten relief in disaster-stricken areas. 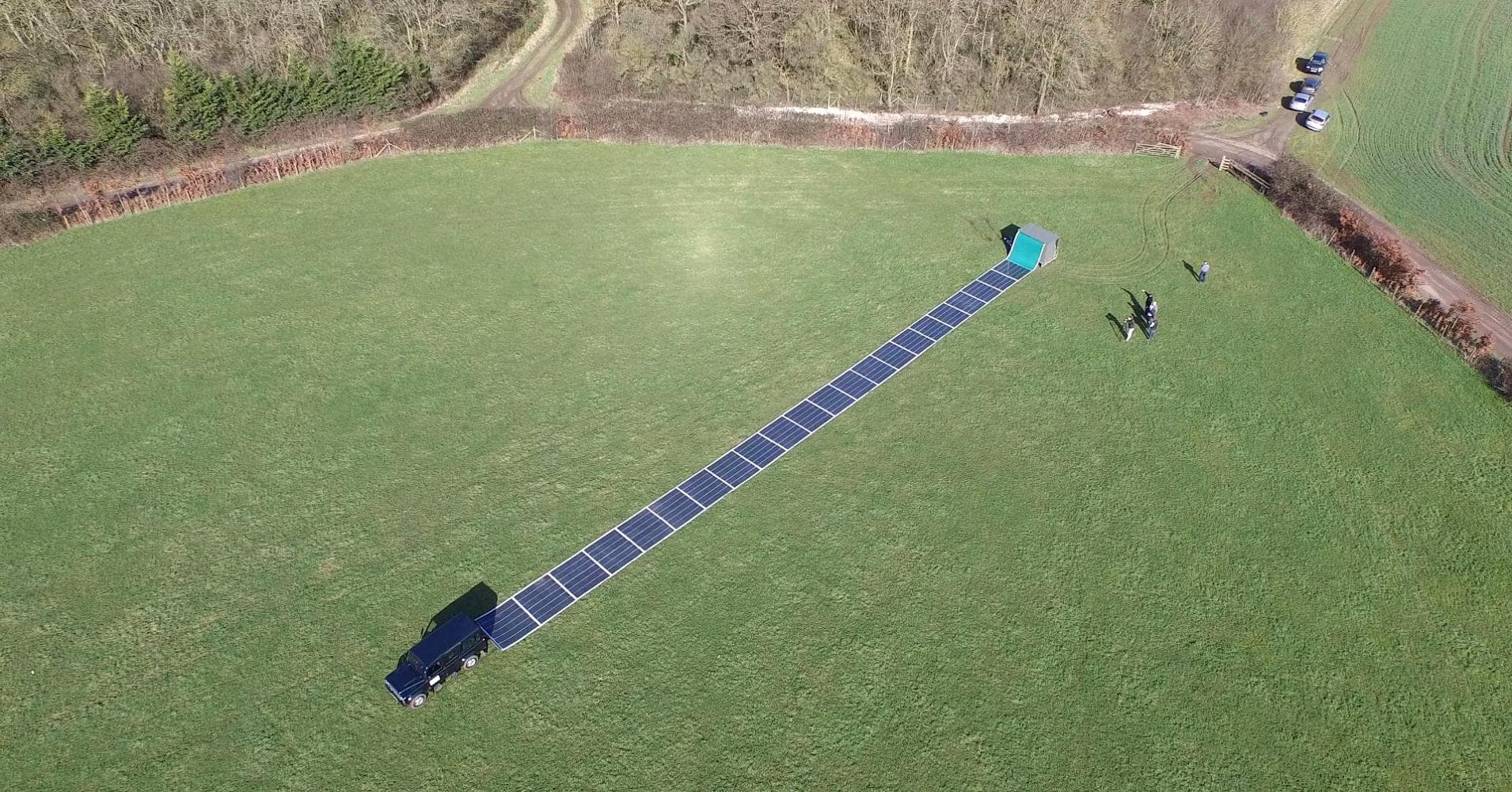 Flat Holm is an island in the middle of the Bristol Channel in Great Britain composed of limestone, and although that image has quite the scenic appeal, it hardly exhausts the extent of the island's charm. The scientific community considers it especially valuable in light of its plant- and bird-life, a preserved domain of nature, which of course attracts the steady flow of tourists. But recently, the geographic treasure has also become a site of human-animal co-existence that goes beyond symbolic gestures and passive preservation; enter the pioneer technology for solar energy called the Rapid Roll system.

Developed by U.K. tech company Renovagen, based in Milton Keynes, Buckinghamshire, the Rapid Roll system lets you unfurl solar panels like a carpet from behind a truck. The idea came from John Hingley, managing director at Renovagen, who first conceptualized this scaled-up mobile solar technology five years ago.

Flat Holm decided to use this technology after Renovagen won a small business contest in 2016 for innovative use of renewable energy. "We were looking at solar and hydro, but that takes up a lot of land and land in cities is expensive," Gareth Harcombe, Cardiff Council's energy and sustainability manager, told the BBC.

Flat Holm's solar panels generate an average of 11KW of power, connected to batteries that can store 24KW/h. That's roughly a day's worth of energy for the island's four inhabitants, as well as for the tourists who frequent Flat Holm. Best of all, the Rapid Roll solar panels can last up to 10 years.

The Rapid Roll panels are packed in 4x4 trailers, which carry enough solar panels to power a mobile clinic with 120 beds or to desalinate 25,000 liters of seawater daily, and is particularly suited for Flat Holm's environmental and logistical needs. "Compared with traditional rigid panels, we can fit up to 10 times the power in this size container," Hingley explained to the BBC.

According to Renovagen's website, the Rapid Roll system was designed above all for fast deployment. That's particularly useful in areas that don't have ready-access to a regular energy source, like Flat Holm, or for areas devastated by natural disasters. "Indeed it has the potential to save lives by – for example, reducing or eliminating the need for military fuel convoys or by powering medical facilities in disaster zones."

In Puerto Rico, for example, which was recently struck by hurricane Maria, some places still don't have electricity. Recovery, according to CNN, has been moving at "a glacial pace." Restoring power is crucial in disaster-stricken areas. Electricity powers communication networks and provides a modicum of normalcy in the disrupted lives of the people affected by such calamities. A staggering 55 percent of Puerto Rico's population were reported without drinkable water following Hurricane Maria. Although it may be too late this time, rapid-deploy solar panels could potentially assuage much of this kind of suffering, in the near future.

With a technology like Renovagen's Rapid Roll solar panels, restoring electricity to typhoon- and hurricane-ravaged areas won't be as difficult. As the company said in their FAQs, "it’s not necessary to have solar engineers model the specific site and calculate particular solar field positions and configurations before deployment – the Rapid Roll will work anywhere and will make the most out of the set of conditions encountered."

Read This Next
Solar Slay
Solar Powered Machine Turns CO2 and Waste Plastic Into Valuable Fuel
Futurism
Best Marine Solar Panels of 2023
Brands We Love
Adding Solar Power to Your Home Is Complicated. But It Doesn't Have to Be.
Black Phase
Materials Breakthrough Could Lead to Cheaper, Better Solar Panels
Brands We Love
Are Solar Panels Worth It for Your Home? Here's a Free Way To Find Out.
More on Earth & Energy
Cow Chow
Yesterday on the byte
Bill Gates Gives $12 Million to Flatulent Australian Cows
Dye in the Water
Yesterday on the byte
Scientists Dye Chunks of Ocean Water Pink for Head-Turning Coastal Experiment
Face/On
Yesterday on the byte
Scientists Found a Dinosaur's Face, Complete With Its Skin
READ MORE STORIES ABOUT / Earth & Energy
Keep up.
Subscribe to our daily newsletter to keep in touch with the subjects shaping our future.
+Social+Newsletter
TopicsAbout UsContact Us
Copyright ©, Camden Media Inc All Rights Reserved. See our User Agreement, Privacy Policy and Data Use Policy. The material on this site may not be reproduced, distributed, transmitted, cached or otherwise used, except with prior written permission of Futurism. Articles may contain affiliate links which enable us to share in the revenue of any purchases made.
Fonts by Typekit and Monotype.