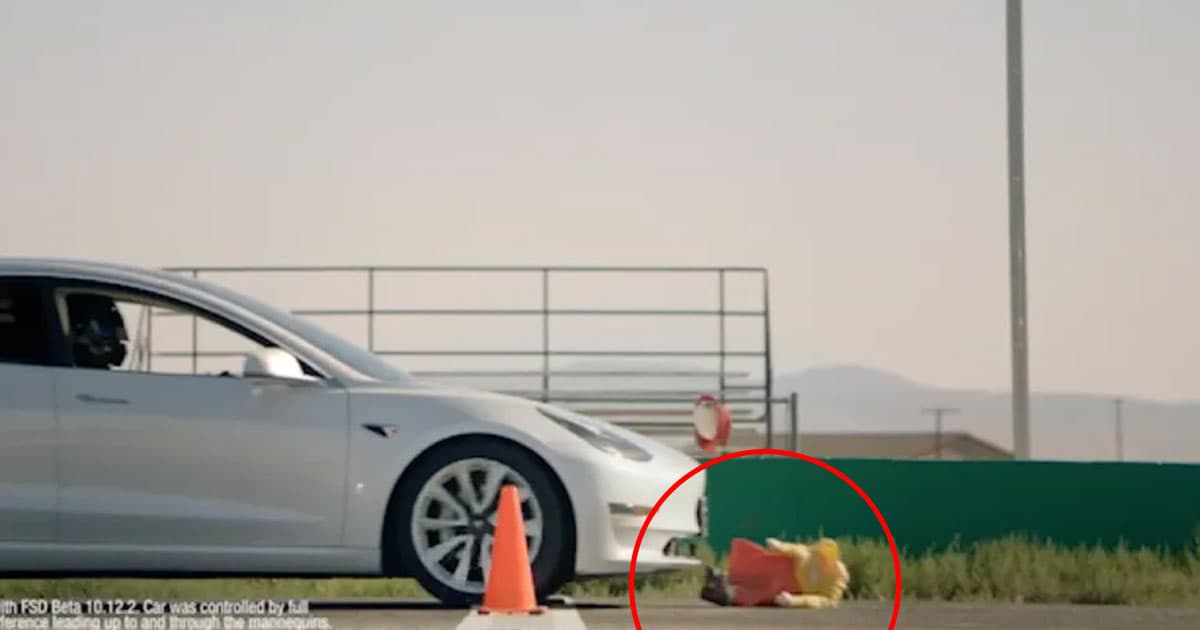 Tesla is calling new videos that show its vehicles mowing down child mannequins while on Autopilot defamatory — and has sent a cease-and-desist letter to the videos' creators, The Washington Post reports.

In other words, has the company never heard of the Streisand effect?

It's a messy back and forth that's bound to draw even more attention to Tesla's Full Self-Driving (FSD) feature, a controversial $12,000 add-on that allows Tesla vehicles to take care of changing lanes and navigate complex city intersections, among other capabilities — though it still frequently makes serious errors and requires drivers to be ready to take over at any moment, making its name an apparent misnomer.

The company has started rolling out a beta software of the feature for its customers to test on public roads, a decision that's already proven highly controversial.

The mannequin videos were put together by the Dawn Project, a campaign founded by tech mogul and billionaire Dan O'Dowd to stop "Elon Musk’s reckless deployment of unsafe Full Self-Driving cars on our roads," according to its official website.

O'Dowd, who owns an airplane and car operating systems company and ran for US Senate this year, broadcasted ads, including several that show Tesla vehicles striking child mannequins with the car company's FSD feature allegedly turned on.

The billionaire told WaPo that "we have been busy hooking up and putting computers in charge of the things that millions of people’s lives depend on: self-driving cars is one of those."

"This letter is so pathetic in terms of whining: Mr. Free Speech Absolutist, just a crybaby hiding behind his lawyers," he told WaPo, referring to the fact that Musk has repeatedly painted himself as a "free speech absolutist," despite his actions often suggesting otherwise.

In the letter, the Musk-led company argued that O'Dowd's videos are misrepresenting its driver-assistance software.

The company stands firmly behind its belief that both Autopilot and FSD make streets safer. Musk has gone as far as to say that driving on Autopilot is "on balance... unequivocally safer."

Some of Tesla's fans were equally outraged at the videos and even chose to place their own offspring in front of moving Teslas with FSD turned on, sparking outrage. YouTube, for instance, took down the videos to ensure others weren't inspired to try it for themselves.

According to WaPo, Tesla referenced a report by Electrek in its letter, which stated that FSD was "never engaged" during Dawn Project's tests — despite the Dawn Project claiming otherwise.

"The purported tests misuse and misrepresent the capabilities of Tesla’s technology, and disregard widely recognized testing performed by independent agencies as well as the experiences shared by our customers," Tesla deputy general counsel Dinna Eskin wrote in the letter, as quoted by WaPo.

The company even went as far as arguing that the videos "put consumers at risk."

The letter marks an escalation in Tesla's efforts to manage the public's expectations of its driver-assistance software. But, as countless videos have demonstrated, there's at least some cause for concern, despite the company's best efforts to vet those who have early access.

The fact remains: Tesla is testing its unfinished driver assistance feature on public roads, whether other drivers agree with that decision or not.

Trying to silence its critics is only bound to draw even more attention to the issue — and that's clearly not in Tesla's best interest.

Read This Next
Please Elon
Why These Tesla Owners Are Going on a Hunger Strike Against Tesla
Elon's Mad
Elon Musk Snaps at Guy Who Pointed Out Bug in Tesla's Beta FSD
Kiddy League
Tesla Fans Put Child in Path of Moving Tesla on Self-Driving Mode
Tela Ransomware
Tesla Cuts Car's Range By 30%, Demands $4,500 to Get It Back
Where's Musko
7 Theories About Why Elon Musk Has Disappeared
More on Advanced Transport
Alert!
Sep 23 on the byte
Ford Wants Pedestrians to Download an App So Its Trucks Don't Run Them Over
Fly Boys
Sep 23 on the byte
JetBlue, Virgin Strike Deal to Buy Jet Fuel Made From Recaptured CO2
Crunch Time
Sep 23 on the byte
Tesla Updating Vehicles to Not Crush Passengers' Hands in Window
READ MORE STORIES ABOUT / Advanced Transport
Keep up.
Subscribe to our daily newsletter to keep in touch with the subjects shaping our future.
+Social+Newsletter
TopicsAbout UsContact Us
Copyright ©, Camden Media Inc All Rights Reserved. See our User Agreement, Privacy Policy and Data Use Policy. The material on this site may not be reproduced, distributed, transmitted, cached or otherwise used, except with prior written permission of Futurism. Articles may contain affiliate links which enable us to share in the revenue of any purchases made.
Fonts by Typekit and Monotype.