It also has a life support system and powered exoskeleton. 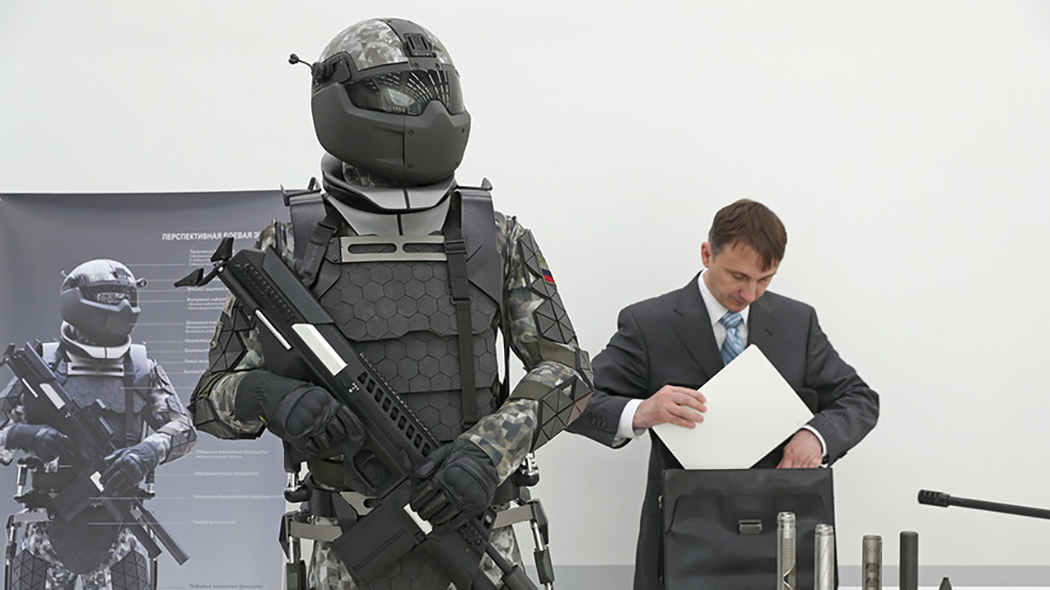 Russia has a new battle suit that seems to be visually inspired by Star Wars's Imperial Shadow Stormtroopers. While Russia's version likely doesn't come with a cloaking device, the high-tech armor does have a few tricks up its sleeves, including nuclear blast resistant tech.

The suit was developed by Rostec and is called the Ratnik-3. The latest upgrade to the new armor includes a reportedly nuclear blast resistant watch. According to a statement released by the press office, the Chief Designer for the Life Support System of the Soldier Combat Outfit at the Central Scientific Research Institute for Precision Machine Engineering, Oleg Faustov, says "The watch, which we have included in the Ratnik outfit, retains its properties upon the impact of radiation and electromagnetic impulses, for example, upon a nuclear blast."

The watch also features a self-winding mechanism and operates under water.

Other perks of the 59 items Rostec has included in the suit include a powered exoskeleton, which is said to give soldiers greater strength and stamina; the latest in bulletproof body armor tech; and a full face-covering visor and helmet equipped with a video game-esque heads-up display (HUD). According to Russian state-owned media outlet Tass, the weight of the completed combat gear will be reduced by 30% when it is released for use in the field.

The future of how we will one day wage war is being developed now. The United States is also working on a high-tech combat suit of its own. The suit, inspired by pop culture, has been dubbed the Iron Man.

Weapons are also getting next-gen upgrades, with laser weapons currently being deployed in various forms around the world. The United States Navy has the Laser Weapons System (LaWS) mounted on the USS Ponce, an amphibious naval transport dock, to defend against drone strikes and eventually incoming missiles. China has also previously given its soldiers laser weapons designed to blind opponents.

In the sky, killer drones the size of a quadcopter have been developed to carry weapons. The Air Force is even training soldiers to get the military ready for combat in space with extraterrestrials or other hostile interests.

Of course, with all these developments, it maybe good to be reminded what a nuclear showdown would do to the planet—and hope that these future technologies rarely have to be put to use.

Read This Next
"Hoodwinked"
New Pentagon Group Accused of Trying to "Bury" UFOs Again
Hmmmmmm
The Pentagon Just Released Its UFO Report
Crush Depth
Debris Found From Missing Submarine, All Crew Presumed Dead
Found Footage
Pentagon Confirms That Leaked Video Is Part of UFO Investigation
Killer Copter
Middle Eastern Nation First to Buy Drone Armed With Machine Gun
More on Robots & Machines
Gunne Sax
Sep 29 on the byte
Man 3D Prints 110 Guns, Sells Them to Buyback Program for $21,000
From the Dept. of...
Sep 28 on futurism
Best Printers Under $100 in 2022
From the Dept. of...
Sep 27 on futurism
Best MIDI Keyboards in 2022
READ MORE STORIES ABOUT / Robots & Machines
Keep up.
Subscribe to our daily newsletter to keep in touch with the subjects shaping our future.
+Social+Newsletter
TopicsAbout UsContact Us
Copyright ©, Camden Media Inc All Rights Reserved. See our User Agreement, Privacy Policy and Data Use Policy. The material on this site may not be reproduced, distributed, transmitted, cached or otherwise used, except with prior written permission of Futurism. Articles may contain affiliate links which enable us to share in the revenue of any purchases made.
Fonts by Typekit and Monotype.