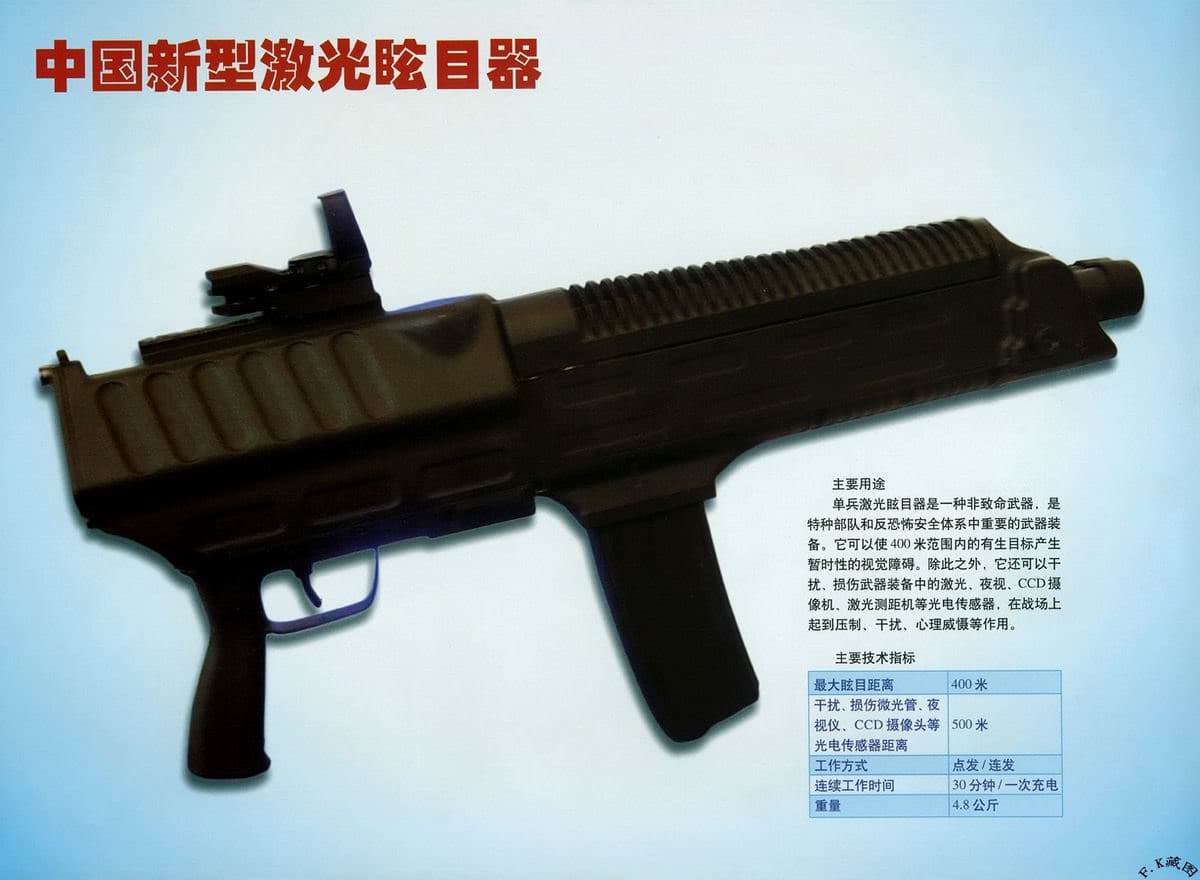 Despite Beijing signing an international agreement banning their use, China is providing its military with blinding laser weapons in clear violation of said agreement.

“China has been updating its home-made blinding laser weapons in recent years to meet the needs of different combat operations,” the official military newspaper PLA Daily reported on Dec. 9, 2015. Ultimately, blinding laser weapons are used (as their name implies) to blind targets with lasers if they are at a short distance, or interfere with night vision equipment. The statement also explains that the tech could be used to damage the aforementioned equipment.

Concerns have been made since the weapons appear to violate a provision of the United Nations 1980 Convention on Certain Conventional Weapons. Included in the convention is a 1998 Protocol on Blinding Laser Weapons prohibiting their use in combat.

A retired naval intelligence officer named Jack Daly, who in 1997 suffered eye injuries from a laser that was aimed at the helicopter he was occupying near Port Angeles, Washington, said he is worried the Chinese laser devices could find their way into the United States.

“The U.S. already has a problem with laser pointers being directed at in flight aircraft,” Daly said. “If these laser guns make their way here, we are very likely to see aircrews actually blinded during flight and possibly worse.”

The FBI has launched a campaign offering rewards for people illegally firing laser pointers at aircraft cockpits in response to numerous reports of such incidents.

“When aimed at an aircraft from the ground, the powerful beam of light from a handheld laser can travel more than a mile and illuminate a cockpit, disorienting and temporarily blinding pilots,” the FBI stated.

The PLA has at least two types of laser guns and may be attempting to market them overseas, said Rick Fisher, an authority on Chinese weapons systems. There were four different types of laser guns mentioned in The Global Times report, including the BBQ-905 Laser Dazzler Weapon, the WJG-2002 Laser Gun, the PY132A Blinding Laser Weapon, and the PY131A Blinding Laser Weapon.

Read This Next
Deadly Thoughts
The Pentagon Wants to Control Drones With Soldiers' Brain Waves
Futurism
The Pentagon Tells Soldiers To Stop Sharing Their Locations With Apps
Futurism
Military Funding For Prosthetics Helps More Than Just Soldiers
Futurism
The US military plans to release a "supersoldier" suit in 2018
More on Enhanced Humans
Brain-Computer Im...
Jan 3 on the byte
Neuralink Cofounder Says New Company's Eye Implant Could Be "Ultimate" VR Tech
Eyes Have It
12. 30. 22 on futurism
Meet the Neuralink Cofounder Who Left and Started a Competitor That's Now Rapidly Catching Up
Butcher Shop
12. 6. 22 on futurism
Neuralink Employees Admit Company Has Killed 1,500 Animals So Far
READ MORE STORIES ABOUT / Enhanced Humans
Keep up.
Subscribe to our daily newsletter to keep in touch with the subjects shaping our future.
+Social+Newsletter
TopicsAbout UsContact Us
Copyright ©, Camden Media Inc All Rights Reserved. See our User Agreement, Privacy Policy and Data Use Policy. The material on this site may not be reproduced, distributed, transmitted, cached or otherwise used, except with prior written permission of Futurism. Articles may contain affiliate links which enable us to share in the revenue of any purchases made.
Fonts by Typekit and Monotype.