Nanobots Made of DNA Can Now Carry and Sort Molecular Cargo

These bots have feet, an arm, and even a “brain” telling them what to do. 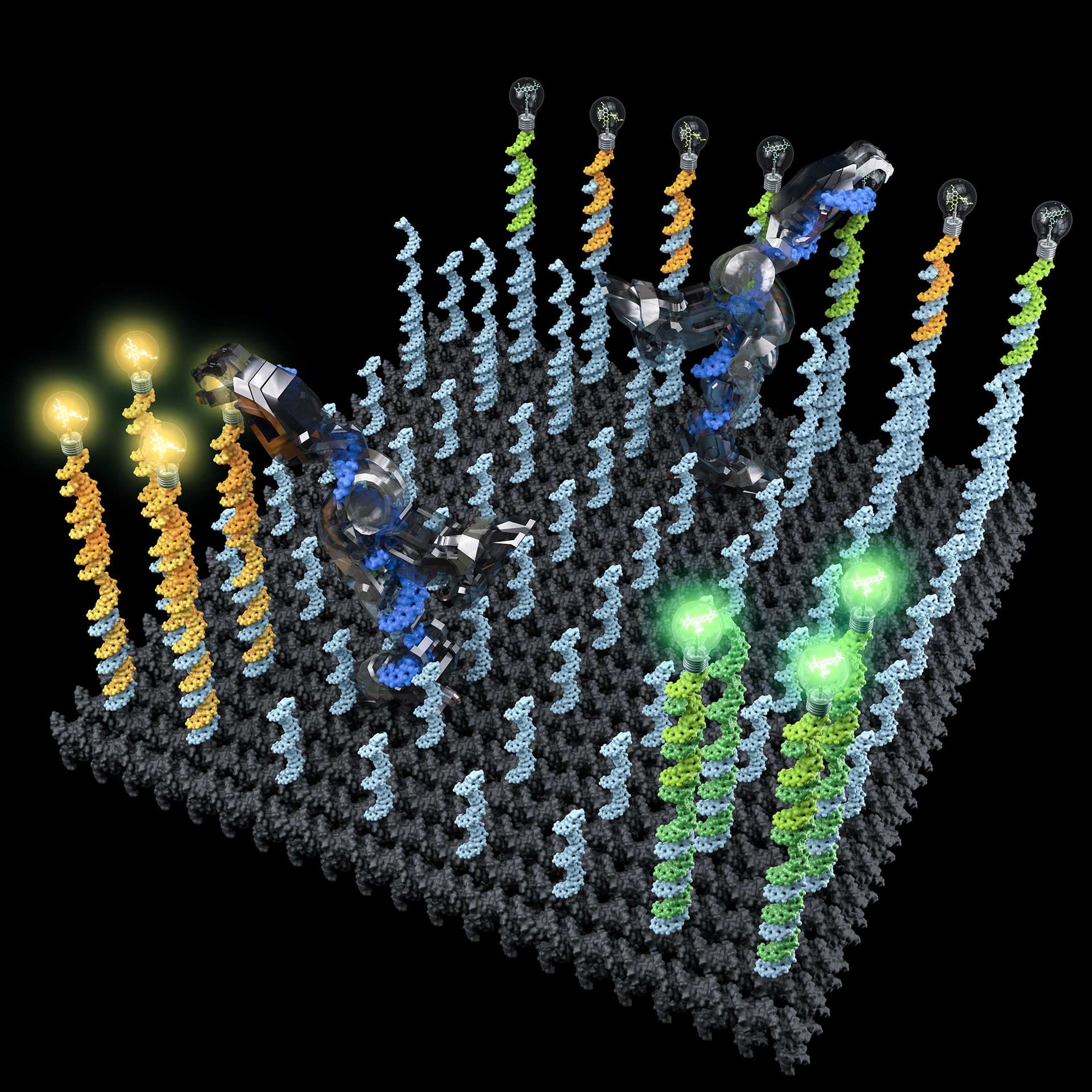 Robots Made of DNA

Scientists are increasingly using DNA to build structures at the tiniest scales, a process sometimes called DNA origami. Because DNA can store a lot of information, structures built out of it can be used to deliver medicines throughout the body or transport gene editing tools. Now, researchers have used DNA to create a new type of robot designed to move and lift cargo at the smallest scales. Their research has been published in Science.

"Just like electromechanical robots are sent off to faraway places, like Mars, we would like to send molecular robots to minuscule places where humans can't go, such as the bloodstream," Lulu Qian, a bioengineering professor at the California Institute of Technology and one of the study's authors, explained in a press release. "Our goal was to design and build a molecular robot that could perform a sophisticated nanomechanical task: cargo sorting."

The researchers wanted to create robots that could pick up and sort molecules within a designated space. To that end, they created a three-part DNA robot out of a single strand of DNA. To help it maneuver within the designated space, the robot had a "leg" with a pair of feet. An "arm" with a "hand" allowed it to carry cargo, and a third component was added to tell the hand when a specific drop-off point had been reached so it would know to release the cargo.

To test their robot, the researchers created a board featuring a grid of single DNA strands to which their robot could bind with one foot. Meanwhile, the other foot would swing freely until it found another strand on the board. Moving in this manner, the robot needed five minutes to take one six-nanometer step.

During the course of its excursion, when the robot ran into cargo — in this case, fluorescent yellow and pink dye molecules — it knew to pick it up and deliver it to a designated location depending on the color. The robot was designed to continue this process until all the cargo was sorted, and after 24 hours, the tiny bot had successfully sorted three pink and three yellow molecules.

After several different iterations, the researchers created robots that had an 80 percent chance of accurately delivering their cargo.

According to the researchers, their nanobots can be configured in many different ways. Several bots can work in the same area simultaneously without interfering with the others' tasks or they could be designed to interact with one another. In order for the robots to be useful, though, they need to work a bit faster. The researchers have suggested that adding "tails" or motors to the robots could speed them up.

The major advance is in the researchers' methodology, according to John H. Reif, a computer science professor at Duke University. "Similar systems should be able to perform more complex tasks, such as executing chemical synthesis in parallel," he asserted in an accompanying editorial for Science.

Though Qian noted in the press release that she and her team didn't create the robots with any specific purpose in mind, she thinks other researchers will find applications for them.

"[I]t is my hope that other researchers could use these principles for exciting applications, such as using a DNA robot for synthesizing a therapeutic chemical from its constituent parts in an artificial molecular factory, delivering a drug only when a specific signal is given in bloodstreams or cells, or sorting molecular components in trash for recycling," said Qian.

This could be particularly useful during our exploration of the cosmos as astronauts on long intergalactic flights could have these bots in their bloodstreams, remaining inactive until they receive the signal telling them to release a needed medication.

Read This Next
Mystery Meat
Lawsuit Claims That Subway "Tuna" Contains Extremely Weird DNA
So Long Hard Drives
Scientists Successfully Store Data Inside DNA of Living Bacteria
Brands We Love
Build an Adorable Robot Army With Geeek Club's DIY Nanobots
Buck Like Funnies
This Plastic Bunny Has DNA Explaining How to Make More Bunnies
Brands We Love
Learn About Your Past and Take Control of Your Future With 23andMe Health + Ancestry
More on Hard Science
Tractor Beam
Thursday on the byte
Scientists Build Working Tractor Beam, Although It's Comically Tiny
Having a Blast
Jan 18 on the byte
New Study Shows Where You Should Hide to Survive a Nuclear Attack
Offworld Amino
Jan 15 on the byte
Scientists Find Building Blocks of Life in Meteor That Smashed Into Family's Driveway
READ MORE STORIES ABOUT / Hard Science
Keep up.
Subscribe to our daily newsletter to keep in touch with the subjects shaping our future.
+Social+Newsletter
TopicsAbout UsContact Us
Copyright ©, Camden Media Inc All Rights Reserved. See our User Agreement, Privacy Policy and Data Use Policy. The material on this site may not be reproduced, distributed, transmitted, cached or otherwise used, except with prior written permission of Futurism. Articles may contain affiliate links which enable us to share in the revenue of any purchases made.
Fonts by Typekit and Monotype.