The data could even be passed on to the organisms' offspring. 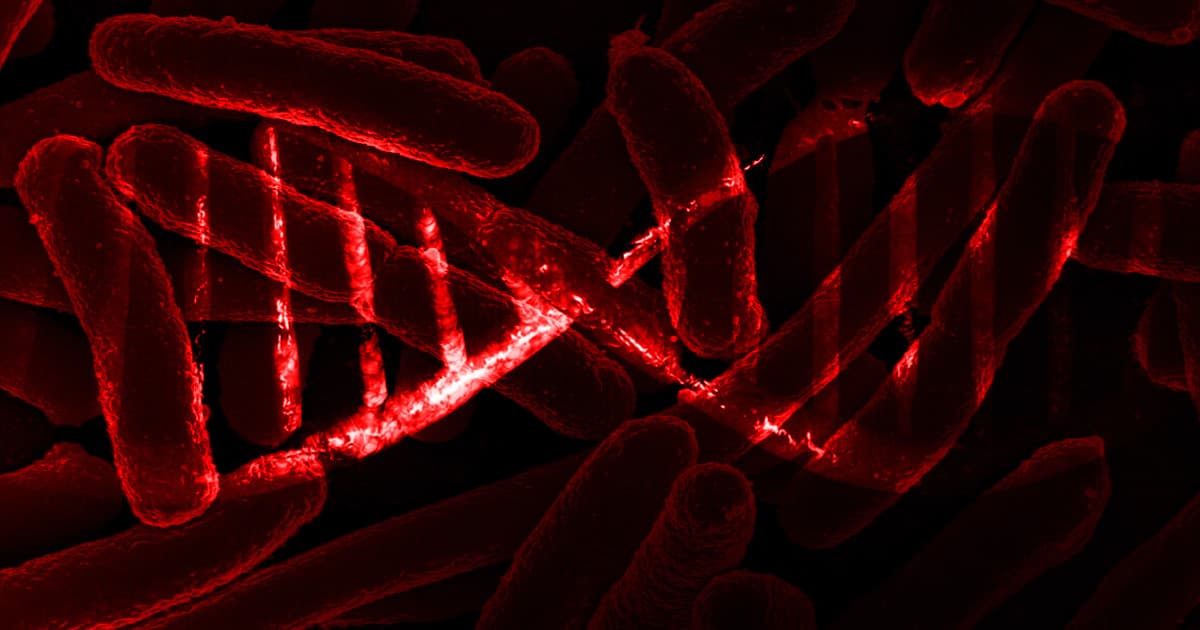 Thanks to its tremendous density, DNA can store the equivalent of about 10 digital movies of data in the volume of a single grain of salt.

Now, scientists at Columbia University have pushed the concept even further, by writing data into the DNA of living bacteria, as Science reports.

To store data inside DNA, it has to be converted by a DNA synthesizer from its binary format of ones and zeros into organic code: combinations of the molecule's four bases including adenine, guanine, cytosine, and thymine.

Unfortunately, the longer this code is, the less accurate the work of the synthesizer becomes. As a workaround, researchers break up the code into chunks. DNA sequencers then have to piece them together again to access the data.

That also doesn't stop the DNA from degrading over time, meaning that data storage isn't forever, as Science points out.

As a solution, the researchers from Columbia are trying to figure out if the same thing works with living organisms. Not only would this data last much longer, it could even be passed on to the organisms' offspring.

A team led by Columbia's Harris Wang has been working on doing just this for the last couple of years. Most recently, the team managed to electrically encode 72 bits of data to write the string of letters "Hello world!" into a population of bacterial cells.

The researchers used CRISPR, the popular gene-editing technique that can splice and edit new sequences into DNA, to store data in these active genes.

"This work establishes a direct digital-to-biological data storage framework and advances our capacity for information exchange between silicon- and carbon-based entities," the team writes in their paper published this week in the journal Nature Chemical Biology.

Needless to say, despite the amazing feat, that's not a lot of data.

The team will also have to figure out a way for the data to survive mutations and replications of the bacteria's DNA.

Read This Next
Mystery Meat
Lawsuit Claims That Subway "Tuna" Contains Extremely Weird DNA
Buck Like Funnies
This Plastic Bunny Has DNA Explaining How to Make More Bunnies
Brands We Love
Learn About Your Past and Take Control of Your Future With 23andMe Health + Ancestry
Futurism
Never-Before-Seen Viruses With Weird DNA Were Just Discovered in The Ocean
Futurism
DNA of Man Who Died in 1827 Recreated Without His Remains
More on Hard Science
Moved to Tears
Thursday on the byte
Scientists Say New James Webb Images Are So Powerful That It Was Emotional Just Looking at Them
Good God
Tuesday on the byte
Huge Cloud of Toxic Yellow Gas Kills 13
zombie star
Tuesday on futurism
Scientists Puzzled by Star That Exploded in Supernova But Somehow Survived
READ MORE STORIES ABOUT / Hard Science
Keep up.
Subscribe to our daily newsletter to keep in touch with the subjects shaping our future.
+Social+Newsletter
TopicsAbout UsContact Us
Copyright ©, Camden Media Inc All Rights Reserved. See our User Agreement, Privacy Policy and Data Use Policy. The material on this site may not be reproduced, distributed, transmitted, cached or otherwise used, except with prior written permission of Futurism. Fonts by Typekit and Monotype.