Glowed Up
7. 2. 21 by Victor Tangermann
Glowed Up
/Off World

Look at that glow. 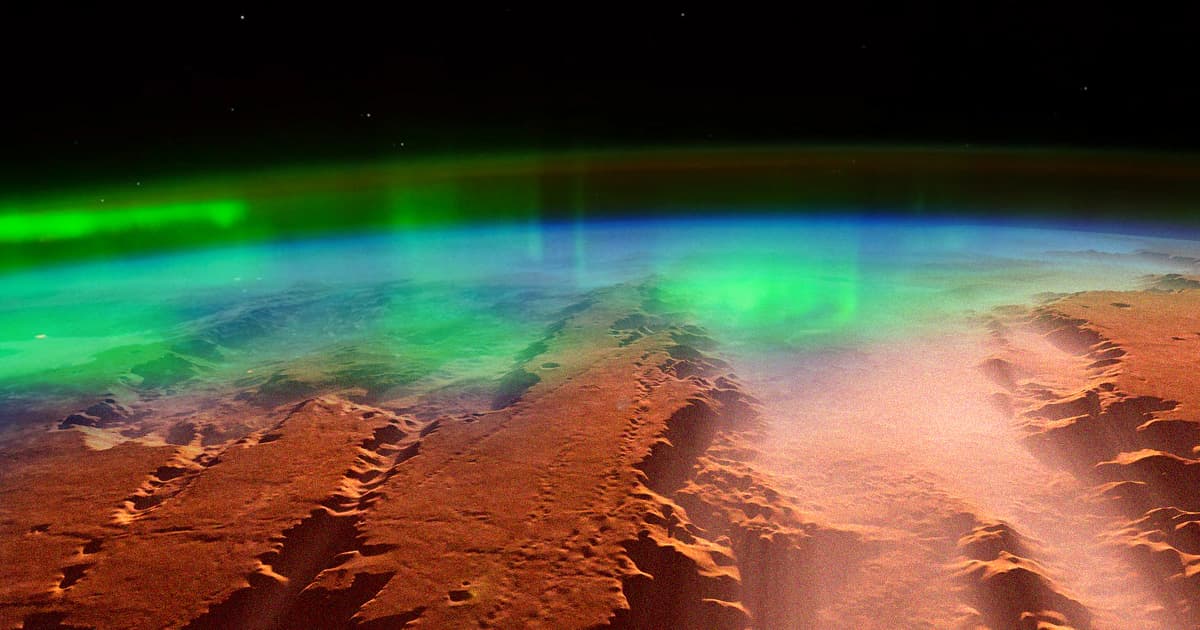 A probe sent by the United Arab Emirates to study the Martian atmosphere has caught an exceedingly elusive event on camera, Space.com reports: a nightside aurora on Mars.

Before the Hope orbiter's formal science mission even began, one of its scientific instruments caught the aurora, which is a notoriously fleeting phenomenon that has proved to be very difficult to study.

Images released on Wednesday show the auroras standing out in the shape of bright structures set against the dark Martian night sky.

It's a lovely chance encounter — the discovery wasn't even part of the core science observations planned for the mission — that could set up the Emirates Mars Mission for many more exciting discoveries to come later this year.

"They're not easy to catch, and so that's why seeing them basically right away with [Emirates Mars Mission] was kind of exciting and unexpected," Justin Deighan, a planetary scientist at the University of Colorado and deputy science lead of the mission, told Space.com.

"It's definitely something that was on our radar, so to speak, but just looking at our first set of nighttime data and saying, 'Hey, wait a second — is that? — it can't be — it is!' — that was a lot of fun," Deighan added.

On Earth, auroras are linked to the planet's magnetic field. When charged particles get blasted into the atmosphere, it alters their trajectories, causing existing particles in the atmosphere to ionize and emit light of varying colors as they interact with each other.

On Mars, however, these auroras aren't restricted to the north and south poles, appearing across the rest of the planet as well.

Instead, as Deighan explained to The New York Times, it's as if "you took a bag of magnets and dumped them into the crust of the planet."

"And they’re all pointed different ways," he added. "And they have different strengths."

These scattered magnetic fields cause solar wind particles to shoot off in different directions, interacting with atoms and molecules in the planet's upper atmosphere, which triggers the glow.

The probe's Ultraviolet Spectrometer was originally meant to study the massive halo of hydrogen and oxygen that surrounds the Red Planet, which eventually dissipates into open space.

"We did anticipate that the instrument would have the potential to do this," Hessa Al Matroushi, the mission's science lead, told Space.com. "It wasn't designed to do it. But because we do have a mission that is targeting global coverage and we're looking at Mars from different sides and very frequently within the atmosphere, that enabled us to have such a measurement of discrete auroras, which is very exciting."

The team is hoping the discovery could allow "new doors of study to be opened when it comes to the Martian atmosphere and how it interacts with the solar activity," Matroushi told the Times.

Read This Next
Carbon-Based
NASA Rover Finds New Potential Evidence for Ancient Life on Mars
So Long
Tragedy! NASA Says the Voyager Space Probes are Powering Down
Expect Delays
Scathing Report Admits NASA Is Years Behind Moon Landing Schedule
Uh Oh
Something Very Bad Might Be About to Go Down at NASA
Moonwalk Drip
NASA Inks Deals for Moonwalking Suits for Artemis Landings
More on Off World
TMNT
2:25 PM on the byte
Chunky Turtle Spotted Near NASA's Mega Moon Rocket
Cloud Spotting
Yesterday on the byte
NASA Needs Your Help Spotting Clouds On Mars
Rolling Coal
Wednesday on futurism
Space Travel Will Absolutely Gut the Environment, Scientists Warn
READ MORE STORIES ABOUT / Off World
Keep up.
Subscribe to our daily newsletter to keep in touch with the subjects shaping our future.
+Social+Newsletter
TopicsAbout UsContact Us
Copyright ©, Camden Media Inc All Rights Reserved. See our User Agreement, Privacy Policy and Data Use Policy. The material on this site may not be reproduced, distributed, transmitted, cached or otherwise used, except with prior written permission of Futurism. Fonts by Typekit and Monotype.