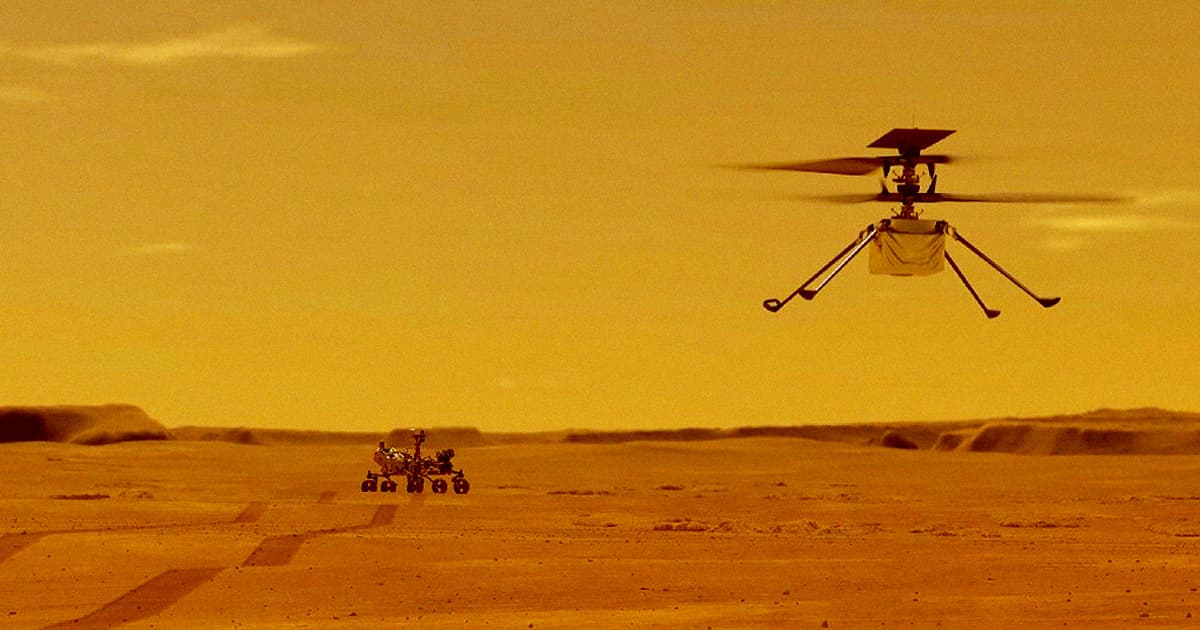 NASA's Mars helicopter Ingenuity pulled off a tremendous feat on Monday, becoming the first aircraft to perform a controlled flight off the surface of another planet.

The little helicopter reached a height of ten feet for roughly 30 seconds, before safely returning to the rocky surface below. NASA's car-sized Perseverance rover filmed the spectacle from several hundred feet away.

In the process, the "little rotorcraft that could," as NASA’s Jet Propulsion Lab (JPL) dubbed it, kicked up a real storm. Now, a video uploaded by the lab shows a Martian dust being kicked up by the dust devil's twin blades, which spin at a breakneck 2,400 revolutions per minute.

Dust in the Wind… on Mars. These enhanced side-by-side videos from @NASAPersevere's Mastcam-Z reveal plumes from #MarsHelicopter upon takeoff and landing. It helps us better understand the Martian wind, and how dust travels through the Red Planet’s atmosphere. pic.twitter.com/JtXBiqCgMW

Thanks to the Red Planet's thin atmosphere, Ingenuity has to work overtime to generate enough lift.

"Dust in the Wind… on Mars," reads a Tuesday tweet. "These enhanced side-by-side videos from Perseverance's Mastcam-Z reveal plumes from Mars Helicopter upon takeoff and landing."

The plumes could "helps us better understand the Martian wind, and how dust travels through the Red Planet’s atmosphere," JPL wrote.

Now that Ingenuity has successfully completed its first flight — the rotorcraft is in even healthier condition, NASA says, now that it has kicked a layer of dust off its solar panels — the JPL team is now looking forward to the helicopter's next couple of flights.

The team is planning to push the envelope with "increasingly difficult" flights, according to Principal investigator MiMi Aung, who spoke elatedly at a press conference following the historic flight on Monday.

"We are going to continually push all the way to the limit of this rotocraft," Aung added.

More on Ingenuity: NASA Says Mars Helicopter Is Now Healthier Than It Was Before Flight