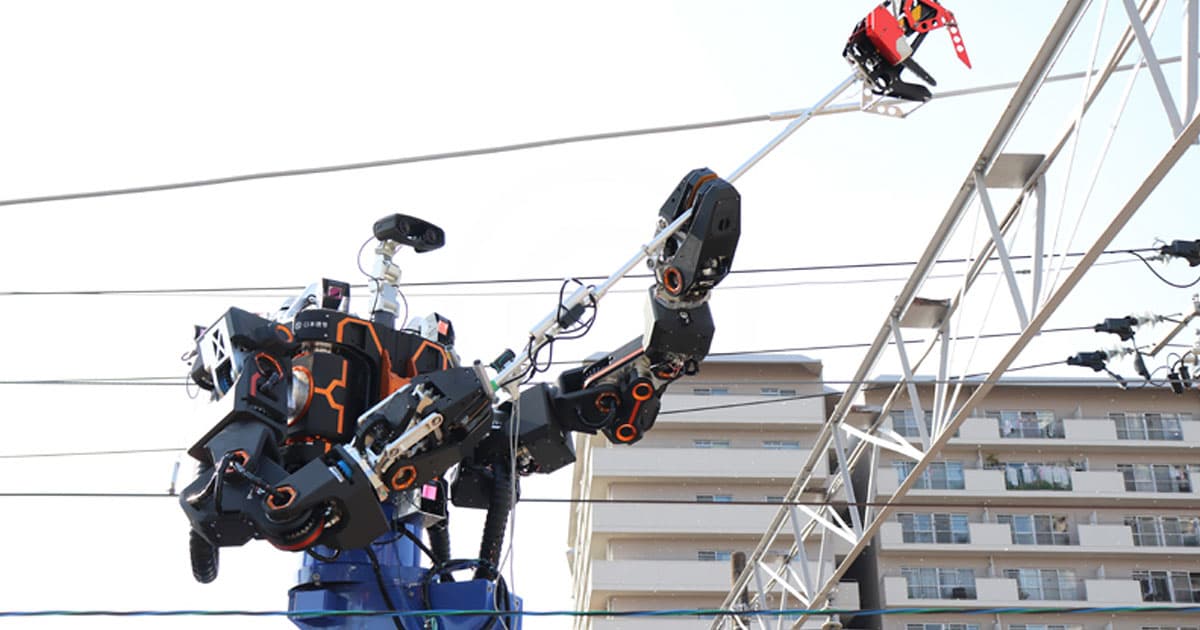 And you control it with a VR setup!

And you control it with a VR setup!

A Japanese company is taking service robotics to a whole new level with a giant, humanoid maintenance robot.

As New Atlas and other blogs reported, the West Japan Rail Company, also known as JR West, is now using a humongous Gundam-style robot to fix remote railway power lines — and to make it even cooler, the robot is piloted by an actual human wearing a VR setup.

With a giant barrel-chested torso mounted on a hydraulic crane arm that can lift it up to 32 feet in the air, this maintenance robot's head looks a bit like Pixar character "WALL-E" and moves in tandem with the motions of its human pilot who tells it where to look and what to do.

So far, this robot developed by the JR West in tandem with the Nippon Signal railway signal technology company is just a prototype and won't be put to work widely until 2024. Nevertheless, it's an awesome peek into the future of service robots, which up until now have mostly freaked people out as they chase them through stores — or worse, assist with police arrests and border patrolling.

Though it was made by the rail industry, there's little doubt that once it's available for purchase, other markets will be interested in getting in on the action.

May the future of service robots be more Gundam and less police bot!

Facebook Huh
Facebook Shows Off Neural "Wristbands" to Control AR Glasses
3. 11. 21
Read More
The University of Tokyo Has Built a Robot That Sweats While Exercising
12. 22. 17
Read More
Boston Dynamics' Bipedal Robot Can Now Do a Backflip
11. 17. 17
Read More
+Social+Newsletter
TopicsAbout UsContact Us
Copyright ©, Camden Media Inc All Rights Reserved. See our User Agreement, Privacy Policy and Data Use Policy. The material on this site may not be reproduced, distributed, transmitted, cached or otherwise used, except with prior written permission of Futurism. Fonts by Typekit and Monotype.