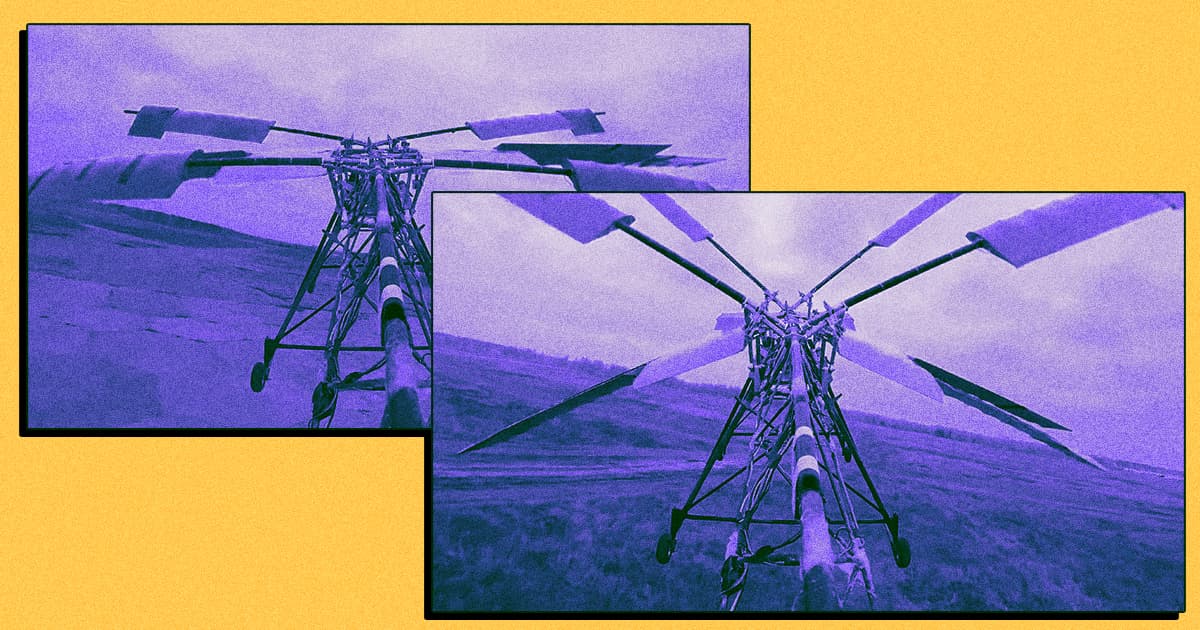 A team of Russian engineers have built a horrifying new kind of aircraft. It flies by flapping massive sets of wings. Which are not unlike the gigantic robot dragonfly from your (or at least some of our) nightmares.

Building flying machines based on insects isn't new, as Gizmodo points out. But any bug-based or otherwise flapping machines are typically extremely small, making this roughly ten-foot behemoth stand out from the pack as a marvel of engineering.

The six-winged Serenity, as the device is called, is likely heavier than any other flying animal or machine, Gizmodo notes, demonstrating that it's possible to build flying machines that don't rely on forward momentum like planes or propellors like drones and helicopters. And it—okay, sorry, it's difficult to concentrate when you can just look at this monster machine:

As Gizmodo notes, Serenity definitely can't handle anything as heavy as a human pilot right now. Nor should anyone want to ride it in its current form — that camera is having a bumpy enough ride as is.

There's no perfectly clear takeaway from this deathtrap, absent the hope that any future passengers/Sonic the Hedgehog villains who decide to mount this thing fare better than that cop in Dubai who crashed his hoverbike from 30 meters off the ground. Best of luck, go with god, etc.

More on unusual aircraft: Watch a Hoverbike-Riding Cop in Dubai Wipe Out Catastrophically

Biological Code
The World's First Reprogrammable DNA Computer is Here
3. 22. 19
Read More
Virtual Combat
The U.S. Army Is Using Virtual Reality Combat to Train Soldiers
3. 22. 19
Read More
Worst Timeline
Russia's Latest Weapon: A Laser Cannon
12. 5. 18
Read More
+Social+Newsletter
TopicsAbout UsContact Us
Copyright ©, Camden Media Inc All Rights Reserved. See our User Agreement, Privacy Policy and Data Use Policy. The material on this site may not be reproduced, distributed, transmitted, cached or otherwise used, except with prior written permission of Futurism. Articles may contain affiliate links which enable us to share in the revenue of any purchases made.
Fonts by Typekit and Monotype.