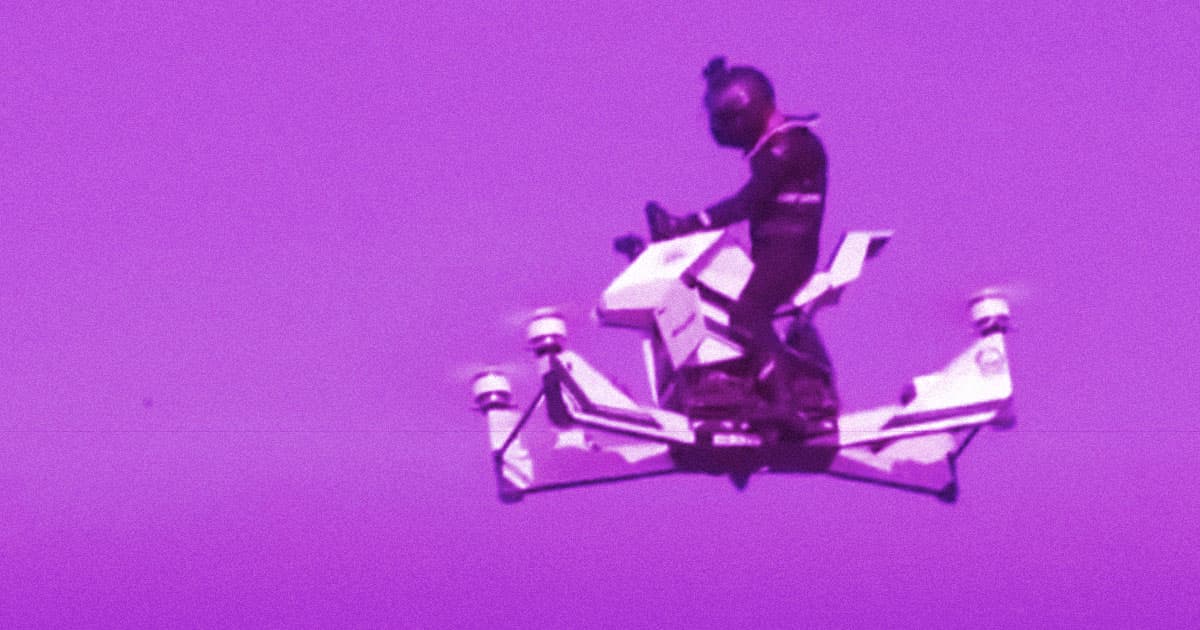 Watch a Hoverbike-Riding Cop in Dubai Wipe Out Catastrophically

That had to hurt.

That had to hurt.

A video of a Dubai policeman crashing a Russian-built hoverbike from a dizzying altitude is going viral on social media.

The video shows a cop taking off, then rapidly descending, losing control and crashing the futuristic hoverbike into the ground. The bikes rotor attachments appear to bend on impact, and then the whole bike dangerously flips over the pilot's head.

The hoverbike in question, a Hoversurf Scorpion S3, built by Russian company Hoverbike, is essentially an oversized quadcopter than can be operated by a pilot sitting on top of it.

The company even uploaded the video to YouTube itself, but it has since been taken down.

"The barometer in Dubai refused and an accident occurred – a down from a height of 30 meters," read the video description before it was taken down, as quoted by New Atlas.

"All safety systems worked well, and the pilot was not injured," the caption read. "Safety is our main concern. It is thanks to such incidents that our designs are becoming more safe."

The Russian startup first showed off its Scorpion hoverbike back in 2017. The large decoration in the background of the crash video suggests it was recorded the same year.

The Dubai police force announced in October 2017 that it will buy several of the hoverbikes to patrol the skies.

More on hoverbikes: You Can Now Preorder a $150,000 Hoverbike

14 Dead
Russian Sub That Caught Fire Possibly Sent to Cut Internet Cables
7. 3. 19
Read More
Hovercops
Dubai Police Are Training Officers to Fly Hoverbikes
11. 8. 18
Read More
Autonomous Transport Pods Make For a Sci-Fi Commute in Dubai
3. 2. 18
Read More
+Social+Newsletter
TopicsAbout UsContact Us
Copyright ©, Camden Media Inc All Rights Reserved. See our User Agreement, Privacy Policy and Data Use Policy. The material on this site may not be reproduced, distributed, transmitted, cached or otherwise used, except with prior written permission of Futurism. Articles may contain affiliate links which enable us to share in the revenue of any purchases made.
Fonts by Typekit and Monotype.