But not everybody is convinced. 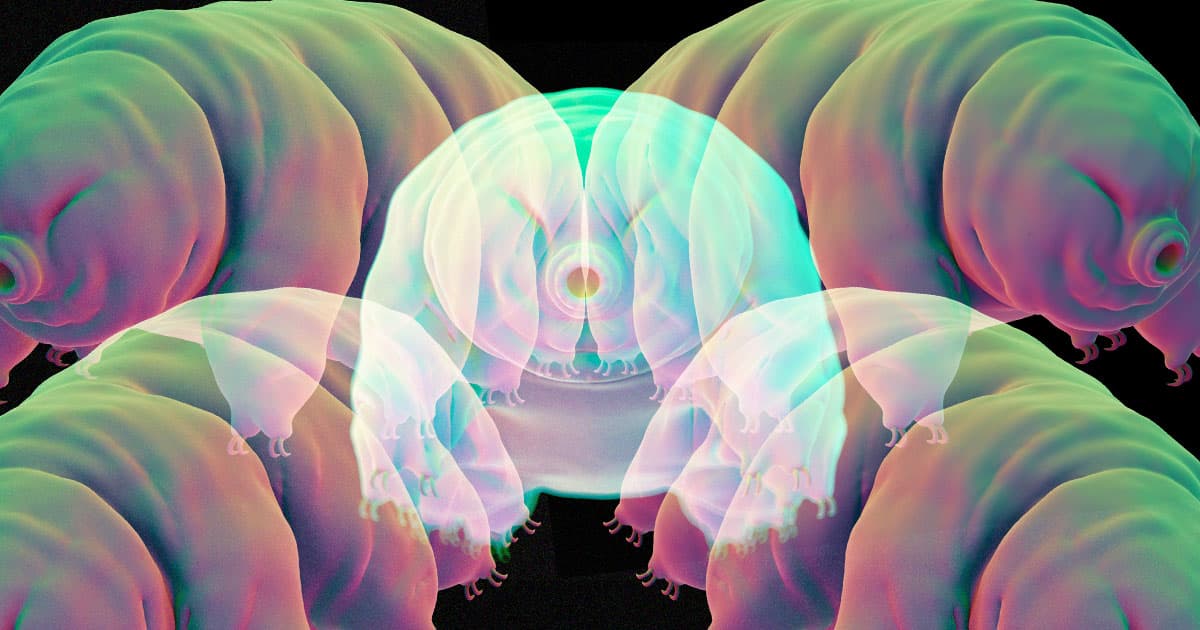 A team of researchers from Europe and Asia claim to have quantum entangled frozen tardigrades, microscopic animals that are extremely hardy and can withstand practically any conditions or abuse.

According to a new controversial preprint, the researchers managed the feat by placing frozen tardigrades between two capacitor plates of a superconductor circuit to form a qubit, the quantum equivalent of a bit.

Upon contact, they say, the tardigrade changed the qubit's frequency.

They then placed this circuit in the vicinity of a second superconductor circuit. Lo and behold, the team observed that the frequency of both qubits and the tardigrade changed in tandem.

As a refresher, quantum entanglement occurs when subatomic particles interact with each other despite despite being apart from each other, a process Albert Einstein nicknamed "spooky action at a distance."

It's worth noting that the results, which have yet to be peer reviewed, are already being called into question by other physicists, Live Science reports, so we will have to take their results with a healthy dose of salt.

"The qubit is an electrical circuit and putting the tardigrade next to it affects it through the laws of electromagnetism we've known about for more than 150 years," science writer and physicist Ben Brubaker tweeted in response to the preprint.

"Putting a speck of dust next to the qubit would have a similar effect," he added.

"This is not entanglement in any meaningful sense," he wrote in a recent blog post titled "no, a tardigrade was not meaningfully entangled with a qubit."

"What the authors did here was put a tardigrade on top of the capacitive parts of one of two coupled qubits," Natelson wrote in the blog. "The tardigrade is mostly (frozen) water, and here it acts like a dielectric, shifting the resonance frequency of the one qubit that it sat on."

"This is not entanglement in any meaningful sense," he concluded.

But the scientists behind the research think they're onto something.

"Our present investigation is perhaps the closest realization combining biological matter and quantum matter available with present-day technology," the researchers write in their paper. "While one might expect similar physical results from inanimate object with similar composition to the tardigrade, we emphasize that entanglement is observed with entire organism that retains its biological functionality post experiment."

In case you were wondering, only one of the three tardigrades — which were harvested from a roof gutter in Denmark no less — survived the ordeal, upon being warmed back up 17 days after the experiment.

More on tardigrades: Scientists Loaded Tiny Organisms Into a Gun and Shot Them At Targets

Read This Next
Beam Me Up Qubit
Researchers Achieve First "Sustained" Long Distance Quantum Teleportation
Quantum Teleportation
Scientists Are Building a Quantum Teleporter Based on Black Holes
All Connected
Scientists Create "Strange Metal" Packed With Entangled Electrons
Dead Serious
Scientists: Global Warming Could Kill Tardigrades
Quantum Mechanics Killed the Cat
Bizarre New Quantum Research: Reality Itself May Be Subjective
More on Hard Science
Moved to Tears
Jun 30 on the byte
Scientists Say New James Webb Images Are So Powerful That It Was Emotional Just Looking at Them
Good God
Jun 28 on the byte
Huge Cloud of Toxic Yellow Gas Kills 13
zombie star
Jun 28 on futurism
Scientists Puzzled by Star That Exploded in Supernova But Somehow Survived
READ MORE STORIES ABOUT / Hard Science
Keep up.
Subscribe to our daily newsletter to keep in touch with the subjects shaping our future.
+Social+Newsletter
TopicsAbout UsContact Us
Copyright ©, Camden Media Inc All Rights Reserved. See our User Agreement, Privacy Policy and Data Use Policy. The material on this site may not be reproduced, distributed, transmitted, cached or otherwise used, except with prior written permission of Futurism. Fonts by Typekit and Monotype.