These Science Cartoons Depict Our Terrifying and Thrilling Future

Swarm robots, space travel, the singularity and so much more. 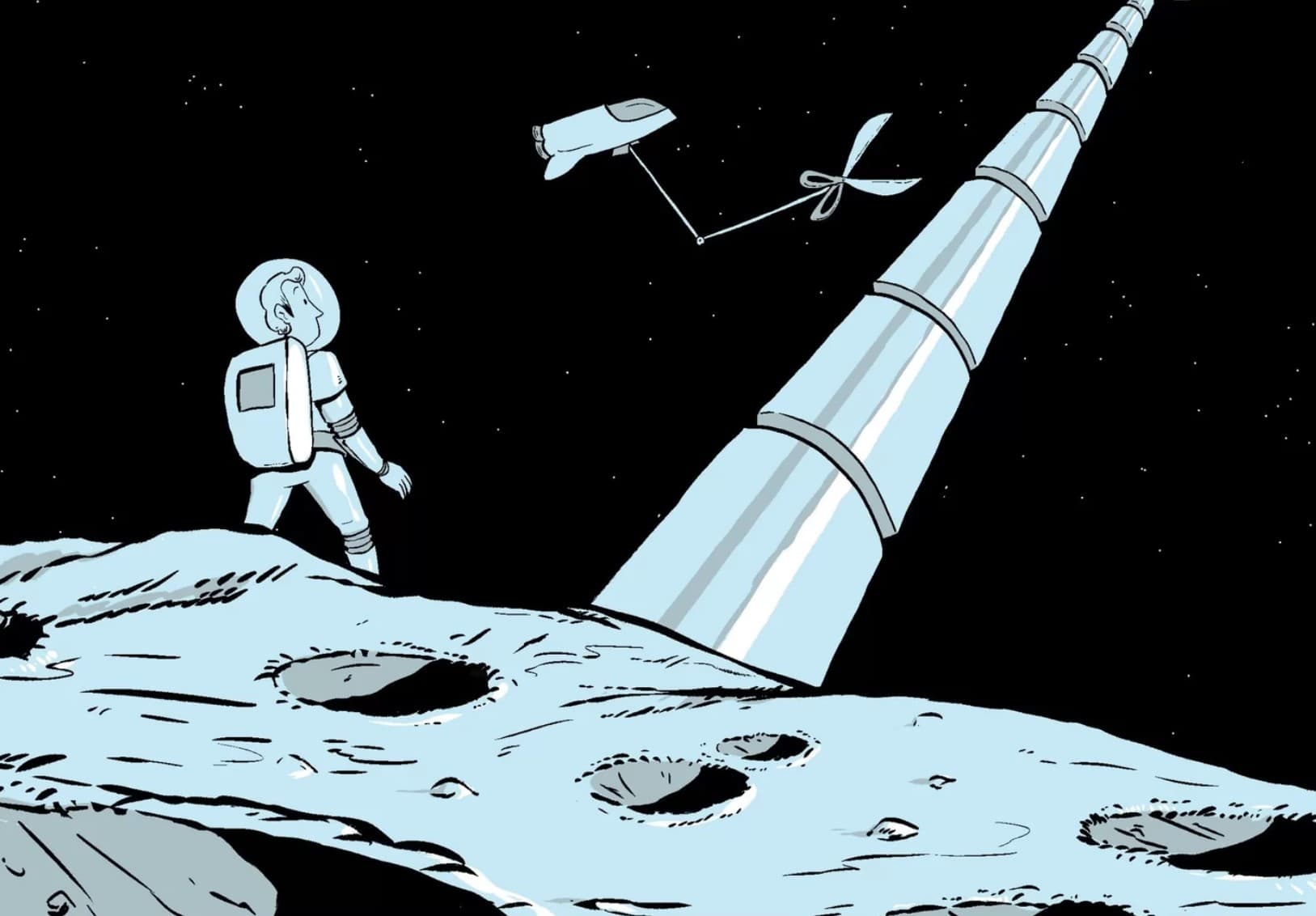 The Future is Coming. . .Soonish

The future is both thrilling and terrifying. It’s normal to feel both. That’s especially true in thinking about the role of technology. For every aspect of life in which technology could play a role, it's not hard to envision a doomsday scenario (or two) arising from it.

When considering the fate of humanity, keen insight, inference, and humor go a long way. That’s what science-communicating husband and wife Zach and Kelly Weinersmith had in mind when they penned their new book SOONISH: Ten Emerging Technologies That’ll Improve and / or Ruin Everything. Zach is a cartoonist best known best for his webcomic Saturday Morning Breakfast Cereal, and Kelly is a biologist at Rice University in Houston, Texas. Their book, published this week by Penguin Press, uses science cartoons to take readers on a fun and fact-filled journey through ten technologies that will likely define our future, for better or worse.

SOONISH gets into topics from space travel and asteroid mining to singularity and swarm robots. Each chapter helps readers understand where we are now, where we hope to be headed (and the major challenges we need to overcome to get there), plus how, should these sci-fi visions become a reality, they could be amazing or terrible for humanity.

It wasn’t easy for the authors to narrow down the technologies to include in their book (and the authors mention some that didn’t make the cut in the book’s conclusion). Choosing our favorites to put in this piece wasn’t easy, either. Here are a few science cartoons to get you started; you’ll have to check out the Weinersmiths’ book for all 10.

The Future of: Space

Since we entered the first space race a half-century ago, technological progress has advanced by small steps and giant leaps, bringing those far-flung corners of the galaxy closer to our fingertips than they’ve ever been. The question of where to go next is limited primarily by what we can build to get us there.

As our natural resources continue to dwindle on Earth, some have suggested we should plan to move off-world if we want humanity to survive. Elon Musk has proposed plans to bring humans to Mars, but others suggest we colonize something a little closer to home first — specifically, the Moon. We, of course, have the technology required to get us there. But getting humans to the Moon, like all space travel, is not cheap, no matter whether or not humans are the cargo.

People with varying amounts of engineering knowledge have been thinking creatively about how we could affordably launch humans into space. SOONISH tackles the space elevator, first suggested by Russian scientist Konstantin Tsiolkovsky in 1895. According to a study published in the journal New Space in 2016, we’ll have the technology to develop the low-cost space travel alternative by 2030 — so long as the materials we need to construct them are developed in the interim.

Getting to previously unvisited planets or galaxies will require different tools. No matter if we get there via shuttle, rocket, elevator, or slingshot, the problem of ownership (by individuals or nations) will come up quickly, as the Weinersmiths point out. And if space travel suddenly becomes more reasonably priced, the real estate situation could get messy.

“The laws of space that are legally agreed upon essentially say that no nation can claim anything out there,” the Weinersmiths write. “We find it hard to believe that a nation with a space elevator would abide by that.”

The Future of: Robots

Robots are already exploring distant terrains in space, but robotics and artificial intelligence are making life on Earth easier, too. It’s no longer a question of when robots will alter our daily lives — it’s already happening. Robots can now be found almost anywhere, from the operating room to the humble smartphone.

The roles robots will have in the future is limited primarily by what we can invent, rather than what we can imagine. As artificial intelligence progresses, we may not have to think about new applications for it, but rather figure out how to rein it in.

The threat of automation is already looming in several industries, leaving human workers wondering what will happen if (or when) a robot takes their jobs. That leads to a more existential question: What if technology renders us obsolete?

That, at least, seems unlikely. What does seem more likely, though, is that humans and AI will augment each other’s capabilities. Take self-driving cars — autonomous vehicles have been shown to improve road safety, but as the Weinersteins ask in their book, “Who’s at fault when a machine messes up?” That is, if humans give objects agency, who’s to blame when things go wrong? The person who built the parts? Who coded the software? Who decided that objects should be granted agency in the first place?

The problem gets even knottier when we consider technology embedded inside the body, such as neural laces, which would make AI a physical part of us.

The Future of: AR/VR

Though technology like neural lace could alter the information the brain processes from the inside, augmented and virtual reality has already begun changing what seems real from the outside. So far, most of the applications for AR/VR are focused on entertainment — games like Pokemon Go proved that anyone with a smartphone can enter and engage with augmented reality. The potential for virtual and augmented reality to enhance everything from how we design cars to letting people “try on” a smile before receiving dental work.

“At its grandest, AR offers us the opportunity to remake the world the way it is in our imaginations,” the Weinersteins write.

VR could have similarly dramatic effects — that is, if anyone could design a VR headset that people would actually wear. The race has been going on for several years: Google Glass may have initially failed, but it’s made somewhat of a comeback, having found a new purpose as a wearable for workers in industries like healthcare and manufacturing that keep their hands busy. Earlier this month Facebook unveiled Oculus, the first standalone VR headset that might actually be affordable.

Scientists have been among the quickest to take advantage of the new technology; AR/VR headsets have already become invaluable research tools. Researchers at Oxford have developed a VR headset that allows biologists to model genetic data in 3D, giving them unprecedented insight into how genes interact. And for the users for whom biology is just a hobby, there are apps like Curiscope’s Virtuali-Tee that lets anyone “see” inside their body — point a smartphone at a t-shirt and glimpse an augmented reality view of one’s internal organs.

The Future of: Medicine

AR/VR might help us peek in the body, but there are still many mysteries of our biology that science has yet to solve. Progress in medicine can only come from advances in both hard science and technology.

With precision medicine, physicians hope to make faster, more accurate diagnoses and even customized treatment. One force driving precision medicine is gene editing technology, like CRISPR/Cas9, which could help doctors better treat patients with afflictions from broken bones to metastatic cancer. As improved technology enables researchers to track more information that could indicate disease at its earliest stages, doctors could fine-tune diagnoses, improve treatment, and even prevent illnesses.

“As medicine becomes more and more personalized, and individual bodies become wellsprings of data, it may be possible to find diagnoses and even cures simply (“simply”) by combing through the information for patterns,” the Weinersmiths write.

In fact, there’s a good chance that many of us will see (if not directly benefit from) the work being done with gene editing in our lifetimes. CRISPR, the powerful gene modifying enzyme, has already been used to edit human embryos, giving researchers an unprecedented look at early human development. It’s helped scientists develop drugs that could curb antibiotic-resistant bacteria. About 20 clinical trials are exploring its potential to engineer immune cells that can target and kill cancer cells or to treat rare genetic disorders.

However, the power edit the human genome brings up ethical concerns, such as reducing the frequency of characteristics that some people find less desirable. At its extreme, the technique could be used to make “designer babies,” as some have feared for decades. The Food and Drug Administration has chosen to classify CRISPR as a drug, meaning it intends to highly regulate its use in humans. The technology is still in its infancy, so it's not yet clear if the FDA will be successful. The technology is  here, but the ethics aren’t yet as developed yet: the question is not so much how can we edit specific traits from embryos— but should we?

Read This Next
From Our Partners
Why I Credit My Professional Success to One Subscription
From Our Partners
Save Over 50% On A Pair Of AirPod Pros And A Lifetime Of Book Summaries
From Our Partners
Expand Your Horizons With An Extra 20% Off This Rosetta Stone And VPN Bundle
From Our Partners
10 Thought-Provoking Books That Give Us Insight And Understanding Into Our Future
From Our Partners
Save Big On This Top Micro Book Library And Get $30 In Store Credit
More on Sci-Fi Visions
What is Happening
Yesterday on the byte
Elon Musk Sets His Twitter Account to Private
From the Dept. of...
Monday on futurism
The Best Humidifiers of 2023
Human v. Giraffe
Jan 24 on the byte
Chaotic Italian Fashion Line Baffles Facial Recognition Software
READ MORE STORIES ABOUT / Sci-Fi Visions
Keep up.
Subscribe to our daily newsletter to keep in touch with the subjects shaping our future.
+Social+Newsletter
TopicsAbout UsContact Us
Copyright ©, Camden Media Inc All Rights Reserved. See our User Agreement, Privacy Policy and Data Use Policy. The material on this site may not be reproduced, distributed, transmitted, cached or otherwise used, except with prior written permission of Futurism. Articles may contain affiliate links which enable us to share in the revenue of any purchases made.
Fonts by Typekit and Monotype.