JFC: The Most WTF Science and Tech Moments of 2019

2019 might've been the weirdest year on record, yet. And these are the stories making that case. 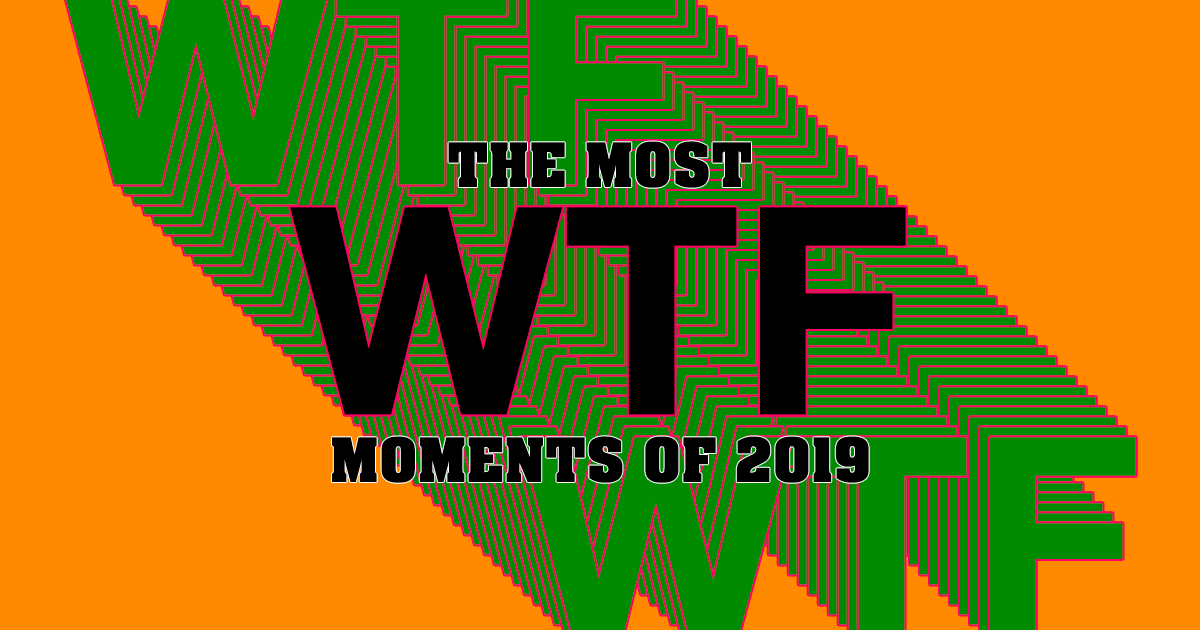 From neural networks spitting out images inspired by lab monkeys' nightmares, to dark matter bullets leaving fist-sized holes in the chest cavities of astronauts, this year was filled with the kinds of scientific and technological discoveries that often left us, lacking better poetry, with a single, all-consuming thought:

Note that it's not "WTF?" The difference is between a rhetorical question, and a declarative statement: This is our world. This is our world?! This is our world. We can't even begin to imagine what weird questions (or answers) the dark and twisted minds of the world's great scientific and technological talent will come up with for the next one. Forgoing that for now, we say this: May their imaginations be banished to the underworld for eternity — but before they do, let's peek into their twisted minds one last time. These are the Most WTF Science and Technology Moments of 2019.

The Headline: Someone Listed a T-Rex on eBay, and Paleontologists Are Furious

W. A Montanan discovered the 68 million-year-old skeleton of a baby tyrannosaurus rex in his yard. Deciding that it spent enough time at such a low-class local institution as the museum that's housed the skeleton since 2017, the great and noble amateur archeologist... decided to sell it on eBay. For a cool $2.95 million.

TF. Paleontologists were understandably pissed! They wanted time to study this rare and valuable artifact, not shop it over four slides like it's a rare Beanie Baby. Oh, and his listing somehow actually included the garbled line: "This Rex was very a very dangerous meat eater. It’s a RARE opportunity indeed to ever see a baby REX, if they did not grow quickly they could not catch prey and would die." eBay: Where's the world's great excavations go to... be sold to some overly moneyed rando whose most recent "cop" is a signed Battlefield Earth shirt and a pair of Nikes worn by the Heaven's Gate cult. Cool.

The Headline: A Neural Net Hooked Up to a Monkey Brain Spat Out Bizarre Images

W. Oh, just your average day at the animal testing lab. Harvard scientists hooked up a monkey brain to a neural net, then tried to stimulate individual neurons responsible for recognizing faces, by showing it images generated by the AI.

TF. We probably could have seen this one coming. The images generated by the AI — more or less what the monkey saw or imagined — were darker and more twisted than anything we could've prepared ourselves for. The scientists saw blurs that resembled humans wearing surgical masks — likely lab technicians. We saw the shit of nightmares for the next three years, and several grand's worth of bills in trauma therapy.

Planet Pepsi: A Soda Giant's Scheme to Subsume Your Sky with Satellites

The Headline: Pepsi Plans to Project a Giant Ad in the Night Sky Using Cubesats

W. Imagine looking into the magnificent splendor of night sky, finding the great constellation of Orion, and seeing... him holding a Pepsi can. Which is what a Russian company called StartRocket (basically) wanted when they endeavored to launch a cluster of cubesats into space to form "orbital billboards."

TF. Hopefully we don't have to be the ones to tell you that literally plastering the night sky with annoying billboard ads is a horrendous idea that should've never been conjured in the first place. Not only would it be an eye sore, we've already learned from SpaceX's Starlink satellites that such an endeavor could pose a very real threat to the astronomy community by messing with their observations. A spokeswoman for PepsiCo confirmed to Futurism that the company was in fact collaborating with the startup, but after backlash, the company called the idea off. For now.

The Prime Minister of the United Kingdom Goes Full 'Terminator'

TF. BoJo's talk jumped from talking about "pink-eyed terminators" — a particularly egregious allegory of the singularity — to "terrifying limbless chicken." As for that last bit, your guess is a good as ours. If we learned anything in 2019, it's that the world's politicians have about as firm a grasp on the nuances of technology as... something that lacks the appendages, motor skills, and cognitive ability to coordinating grabbing anything with. Which is to say: Not at all.

W. Using cutting-edge gene-editing techniques, a team of Chinese scientists improved memories of unaltered monkeys by adding a human version of a gene to the macaques' brains, which made them develop along a more human-like timeline. The monkeys even had better reaction times.

TF. Unsurprisingly, the research kicked off a debate about the ethics of altering the genes of macaques. Geneticists called the move "a very risky road to take," arguing that it could lead to even more extreme modifications in the future. Like when we teach them how to launch military coups. Against us. And then enslave us. And then put us in cages. And then watch as they debate amongst themselves whether they evolved from "the dumbcreatures" or were divined to Earth through prayer to The Great Banana In the Sky.

The Headline: Here’s What an Album Between a Musician and an “AI Baby” Sounds Like

TF. We're gonna let the music speak for itself here, except to say that this is nothing short of a truly eerie listening experience best experienced yourself once, and only once. Special shoutout to the nightmarish beatboxing sounds on the track "Godmother," a collaboration with artist Jlin.

W. A doctoral candidate in physics is suggesting that tiny amounts of dark matter could slice the human body into pieces, Resident Evil-style. The particles could end up behaving like high-speed bullets, tearing giant holes into the bodies of astronauts, resulting in "serious injury or death," according to the author. “The closest analogy to a macro collision with a human being is a gunshot wound,” reads the study.

TF. It's a wild, random claim that seemingly emerged from nowhere. Yet it's also a terrifying thought, especially considering we barely even know what dark matter even is, or what it's made out of. Do astronauts really have to worry about this? This theory stretches a pretty long list of assumptions to its drawn out and arguably sensationalist conclusion.

W. In an essay for Quartz, neuroscientist Vivienne Ming discussed how she channeled her inner "mad scientist" to give her autistic son "superpowers." She build a facial and expression-recognition system for Google Glass. "I’ve chosen to turn my son into a cyborg and change the definition of what it means to be human,” she wrote. “But do my son’s engineered superpowers make him more human, or less?”

TF. Calling somebody wearing an enhanced pair of Google Glasses a "cyborg" is, eh, a bit of a stretch. And did she really have to refer to herself as a "mad scientist" while doing it?

W. An internet freedom non-profit discovered a creepy-ass database of Chinese women labelled as "breedready." The database includes personal details of more than 1.8 million Chinese women, including phone number, birthday, level of education, and marital status. Their ages ranged from 15 to 95 years-old, each with a "breedready" score. The average age was 32.

TF. Not only is it a preposterous violation of personal privacy, the chance of the database being abused by somebody with less-than-good intentions? Sky high. Making matters worse, nobody even knows where the database comes from, or who created it. Is this the Chinese government trying to address a growing population problem? Or something even more sinister?

The Headline: Russia: We Know Cause of Space Station Leak but Haven’t Told NASA

W. In late 2018, astronauts aboard the International Space Station discovered a tiny hole in the Russian side of the orbital outpost. Houston and Moscow noticed a drop in cabin pressure kicking off a search for the culprit, and a later investigation suggested that the hole was drilled from inside the space station. Days after claiming the hole was probably caused by a tiny meteorite, the Russian space agency changed its mind and said it found evidence of “several attempts at drilling” with a “wavering hand.” Many months later, Russia claimed it finally figured out the cause of the hole — but is keeping the information under wraps.

TF. Nobody knows what caused the drilled hole in the space station. NASA doesn't, (Russia's version of NASA) Roscosmos doesn't — even an entire spacewalk solely dedicated to uncovering the mystery didn't shine any light on the situation. Was it deliberate sabotage? Did Russia's gun-toting humanoid robot have anything to do with it? Like most of 2019's WTF moments in science and technology, we all want to know the answer, but also, on some level, might be better off not knowing the answer at all.

Read This Next
Pew Pew?
The Coolest (and Scariest) Military Tech of 2019
Sound Off!
Futurism's Top Ten Most-Discussed, Shared, and Socialed Stories of 2019
More on Sci-Fi Visions
Human v. Giraffe
Tuesday on the byte
Chaotic Italian Fashion Line Baffles Facial Recognition Software
Step One
Tuesday on the byte
World’s Third Richest Person Says He’s Developed "Addiction" to ChatGPT
FROM THE DEPT. OF...
Tuesday on futurism
The Best Places to Buy A Laptop in 2023
READ MORE STORIES ABOUT / Sci-Fi Visions
Keep up.
Subscribe to our daily newsletter to keep in touch with the subjects shaping our future.
+Social+Newsletter
TopicsAbout UsContact Us
Copyright ©, Camden Media Inc All Rights Reserved. See our User Agreement, Privacy Policy and Data Use Policy. The material on this site may not be reproduced, distributed, transmitted, cached or otherwise used, except with prior written permission of Futurism. Articles may contain affiliate links which enable us to share in the revenue of any purchases made.
Fonts by Typekit and Monotype.