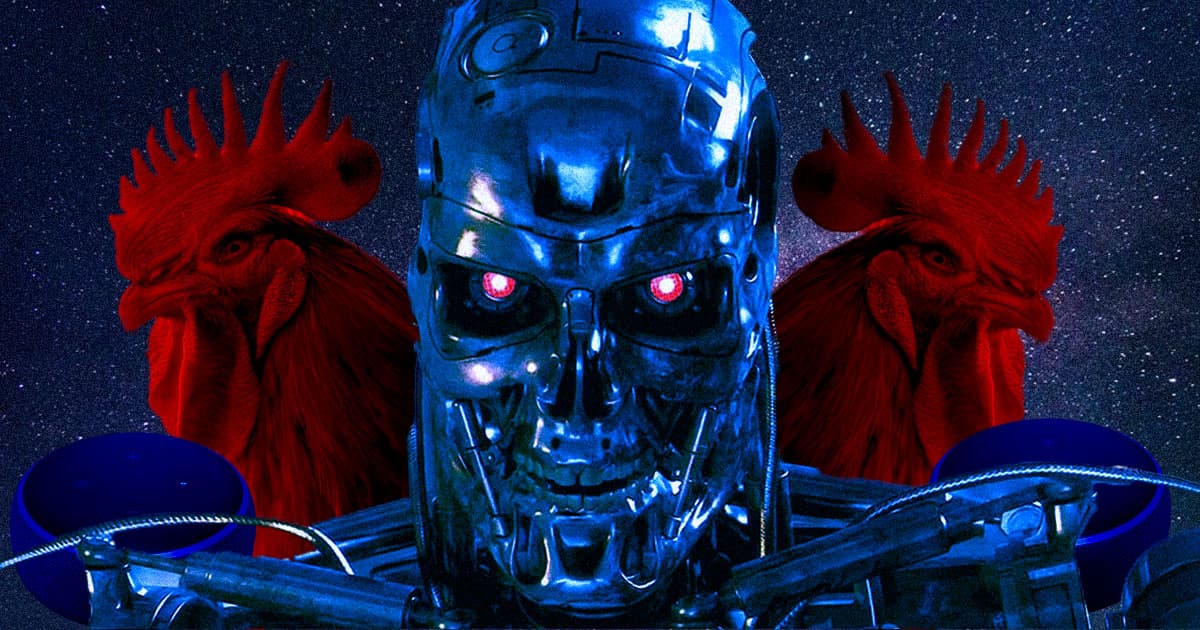 Johnson gave a bizarre speech at the United Nations General Assembly in New York about the future of evil AI, "limbless chickens," and "pink-eyed terminators." He even threw in a Brexit joke.

The timing of the speech is a real head-scratcher — it hasn't even been 24 hours since the UK's Supreme Court ruled that Johnson's decision to suspend Parliament for five weeks was unlawful.

Opposition Labour leader Jeremy Corbyn even asked Johnson to resign following the defeat on Tuesday, a move that would make him the shortest-serving prime minister of all time.

Despite the turbulence, Johnson decided to throw caution to the wind and go out with a bang with an unhinged speech only the likes of Donald Trump could've come up with.

To show just how unhinged Johnson's rambling speech was, here's a selection of choice quotes:

"A future Alexa will pretend to take orders. But this Alexa will be watching you, clucking her tongue and stamping her foot."

Alexa, of course, being Amazon's smart assistant — gaining conscience and seemingly turning into a chicken.

"In the future, voice connectivity will be in every room and almost every object: your mattress will monitor your nightmares; your fridge will beep for more cheese, your front door will sweep wide the moment you approach, like some silent butler."

We all know that the internet of things is adding connectivity to almost any household item out there — but language like this seems needlessly inflammatory and cynical. Does your smart assistant listen to practically anything you say? Yep. Will your mattress monitor your nightmares? Seems doubtful.

"AI, what will it mean? Helpful robots washing and caring for an ageing population, or pink-eyed terminators sent back from the future to cull the human race?"

We're not sure what Johnson could possibly be referring to when he says "pink-eyed terminators." We'll stick with the red-eyed ones, thanks.

"What will synthetic biology stand for — restoring our livers and our eyes with miracle regeneration of the tissues, like some fantastic hangover cure? Or will it bring terrifying limbless chickens to our tables."

Is "terrifying limbless chickens" a reference to the recent trend of lab-grown meat? It's hard to tell.

“Should the machines, and only the machines, decide whether or not we are eligible for a mortgage or insurance or what surgery or medicines we should receive? Are we doomed to a cold and heartless future in which computer says yes — or computer says no with the grim finality of an emperor in the arena?”

There have been a number of debates over the question of whether a machine should determine if somebody should die or not. Are the computers about to take away our ability to call the shots? Not even close.

Our takeaway: As Johnson continues to peer into the future, maybe he should evaluate his own political career.

More on the apocalypse: Tinder Wants to Pair People Based on Their Apocalypse Strategy

Read This Next
Virtual Murder
UAE Official Says Murder Should Be Illegal in the Metaverse
Don't Look Away
College Students Say Crying In Exams Activates "Cheating" Eye Tracker Software
Ice Cream Dreams
McDonald's Sued by Ice Cream Hackers for $900 Million
Company Town
Amazon Pays for High School Class About How to Be an Amazon Grunt
Bad Faith
Elon Musk's World Hunger Tweet Is Taking the UN Wildly Out of Context
More on Future Society
Down in Flames
5:20 PM on the byte
Elon Musk Apparently Thinks Twitter Is a "Flaming Dumpster Rolling Down the Street"
All Tomorrow's Pa...
4:05 PM on the byte
Party Startup Says It Has Zero Plans to Make Any Money With Investors' Funds
Primate Theft
Yesterday on the byte
It Was a Very Bad Weekend for Monkeys Being Stolen From Zoos, Apparently
READ MORE STORIES ABOUT / Future Society
Keep up.
Subscribe to our daily newsletter to keep in touch with the subjects shaping our future.
+Social+Newsletter
TopicsAbout UsContact Us
Copyright ©, Camden Media Inc All Rights Reserved. See our User Agreement, Privacy Policy and Data Use Policy. The material on this site may not be reproduced, distributed, transmitted, cached or otherwise used, except with prior written permission of Futurism. Articles may contain affiliate links which enable us to share in the revenue of any purchases made.
Fonts by Typekit and Monotype.