Someone Listed a T-Rex on eBay, and Paleontologists Are Furious 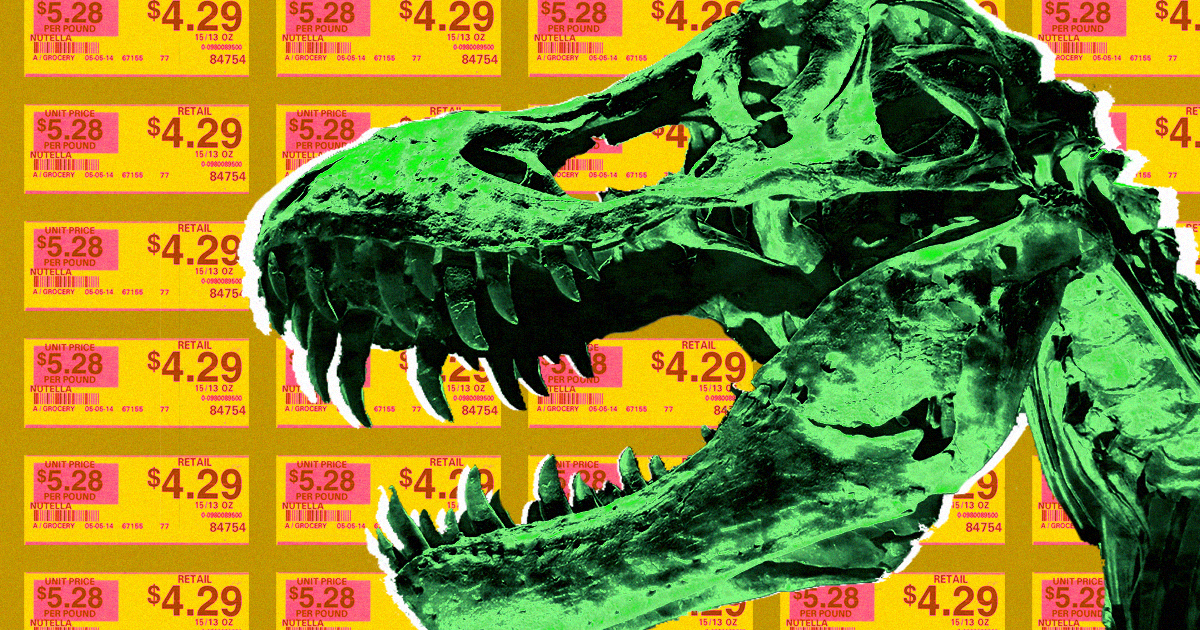 Savvy eBay bidders may have noticed a one-of-a-kind item up for auction: the fossil of a baby tyrannosaurus rex that died about 68 million years ago is up for sale for the low, low price of $2.95 million.

The fossil, discovered in 2013 by a Montanan named Alan Detrich, has been on display at the University of Kansas Natural History Museum since 2017. But now, in a move that The Guardian says has incensed paleontologists, Detrich has decided to sell it off.

The listing, which as of press time is still live on eBay, reads like someone trying to unload their old, beat-up car:

Most Likely the Only BABY T-Rex in the World! It has a 15 FOOT long Body and a 21" SKULL with Serrated Teeth!  This Rex was very a very dangerous meat eater.  It's a RARE opportunity indeed to ever see a baby REX, if they did not grow quickly they could not catch prey and would die. Histology shows the specimen to be approximately 4 years old upon death. Reconstruction of the skull has been done by Curator of Vertebrate Paleontology (from Natural History Museum in FL).

Many of the bones are waiting to be identified, but everyday more and more are being tagged.

The T-REX’ has only 12 teeth in Lower jaw and several other “claimed to be young T-Rex” are actually Nano’s. This is the case even at the Museum in L.A. Now, many Paleo’s think this maybe The “ONLY” T-REX Youth in the World!"

The Society of Vertebrate Paleontology published a statement expressing disappointment that the fossil will be sold before it could be properly studied by experts in the field.

"Only casts and other replicas of vertebrate fossils should be traded, not the fossils themselves. Scientifically important fossils like the juvenile tyrannosaur are clues to our collective natural heritage and deserve to be held in public trust," the statement reads. "That fossils like this are evidence of Earth’s deep past is what makes them valuable, unlike art objects or other items of trade whose value comes from human creativity and artistry. Because vertebrate fossils are rare, most of them contribute uniquely to our knowledge of the history of life. Each one that is lost from the public trust, is part of that already fragmentary history that we will never collectively recover."

Read This Next
Wrong-Clicker
Knockoff eBay NFTs Are Kind of Based, Actually
Futurism
Forget Mammoths, We Could Bring Dinosaurs and Neanderthals Back to Life
More on Future Society
Bird Crap
Yesterday on the byte
It Looks Like Elon Musk Is Actually Building a Twitter Payment Platform
Balloon News
Friday on futurism
China Says "Spy Balloon" Soaring Over America Is Completely Innocent
Down in Flames
Wednesday on the byte
Elon Musk Apparently Thinks Twitter Is a "Flaming Dumpster Rolling Down the Street"
READ MORE STORIES ABOUT / Future Society
Keep up.
Subscribe to our daily newsletter to keep in touch with the subjects shaping our future.
+Social+Newsletter
TopicsAbout UsContact Us
Copyright ©, Camden Media Inc All Rights Reserved. See our User Agreement, Privacy Policy and Data Use Policy. The material on this site may not be reproduced, distributed, transmitted, cached or otherwise used, except with prior written permission of Futurism. Articles may contain affiliate links which enable us to share in the revenue of any purchases made.
Fonts by Typekit and Monotype.