My Picasso
7. 21. 22 by Maggie Harrison
My Picasso
/Artificial Intelligence

Customers are apparently already using it for movie storyboards and illustrated children's books. 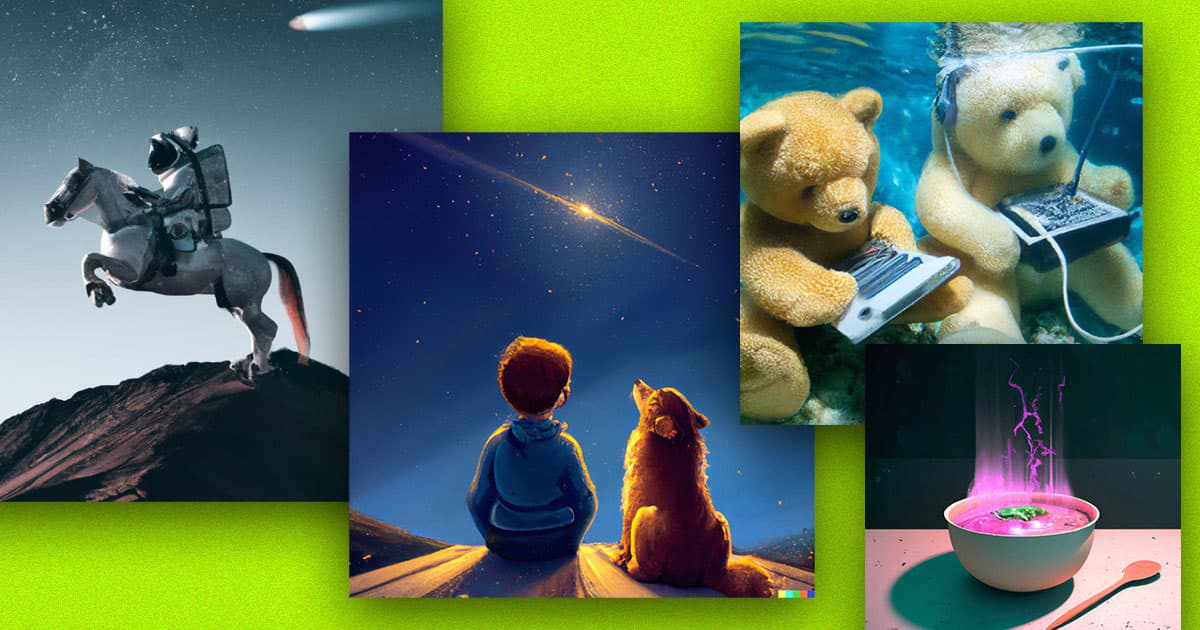 It's official. OpenAI is finally bringing the beta of its DALL-E 2 machine learning system — as in, that extremely impressive text-to-image generator famous for creating everything from anthropomorphic bowling balls to the one true Burger King — to a million members of a public waitlist.

That's a major announcement on its own, but in its press release, the Elon Musk-founded company dropped a second bombshell: from now on, all images generated with DALL-E 2 can be sold for profit by its creator, who they say will claim full rights to do so.

"Starting today, users get full usage rights to commercialize the images they create with DALL-E 2, including the right to reprint, sell, and merchandise," reads OpenAI's statement. "This includes images they generated during the research preview."

OpenAI's press release for DALL-E 2 markets the advanced tech as a "powerful creative tool" that will speed up and inspire the creative process. But as some have already started to point out, the ability to commercialize DALL-E 2 will likely have a pretty major impact on creative industries — and some of the resulting ramifications may not be good.

'This is absolutely insane," wrote one Twitter user who claims to have used the software. "I've been using it for a bit and its understanding of composition, lighting, color is mind blowing. So many implications we're having to think through on how this tool is used and what it means for artists/creators now that it's opening up rights."

The company's press release claims that it's already had users say the software will be used for projects ranging from movie storyboards to illustrating children's books. But while access to the artificial intelligence could be an incredible tool for folks who don't have the funds to, say, hire an illustrator or a graphic designer for a creative project, it could change the job market for artists.

That being said, access to DALL-E 2 might ensure that individual artists have an easier — and faster — time creating, reproducing, and cashing in on their works.

Importantly, OpenAI's press release is careful to note that all commercialized imagery must comply with its very strict content policy — as NPR reports, the company has previously withheld its product from the public for fear that bad actors could use the tool to spread misinformation or create biased, hateful, or otherwise upsetting imagery.

In the end, the breadth of ripple effects remain to be seen. Who knows, though — maybe someday soon we'll be hawking t-shirts and coffee mugs with Picasso-style, DALL-E 2-made Futurism logos.

More on DALL - E 2: Ai Generates Painting of Actual "Burger King" And There's a Terrifying Hunger in His Eye

Read This Next
I Have a Dream of Mass Layoffs
ChatGPT Shamelessly Writes Letter Announcing Layoffs While Promoting Execs and Quoting MLK
Bot My Fault
News Site Admits AI Journalist Plagiarized and Made Stuff Up, Announces Plans to Continue Publishing Its Work Anyway
Unforgettable
Guy "Outsources" His Own Memory to AI
Botulism Toxin
CNET's AI Journalist Appears to Have Committed Extensive Plagiarism
SnowflakeGPT
Conservatives Furious, Claiming ChatGPT Has "Gone Woke"
More on Artificial Intelligence
AI Asshole
Yesterday on the byte
BuzzFeed Columnist Tells CEO to "Get F*cked" for Move to AI Content
Deepfaked Neighbors
Yesterday on futurism
Trashy TV Prank Show Deepfakes Celebrities Into Jackass-Style Situations
Bad Bots
Yesterday on the byte
Oxford Scientists Warn AI Could Be More Deadly Than Nuclear Weapons
READ MORE STORIES ABOUT / Artificial Intelligence
Keep up.
Subscribe to our daily newsletter to keep in touch with the subjects shaping our future.
+Social+Newsletter
TopicsAbout UsContact Us
Copyright ©, Camden Media Inc All Rights Reserved. See our User Agreement, Privacy Policy and Data Use Policy. The material on this site may not be reproduced, distributed, transmitted, cached or otherwise used, except with prior written permission of Futurism. Articles may contain affiliate links which enable us to share in the revenue of any purchases made.
Fonts by Typekit and Monotype.