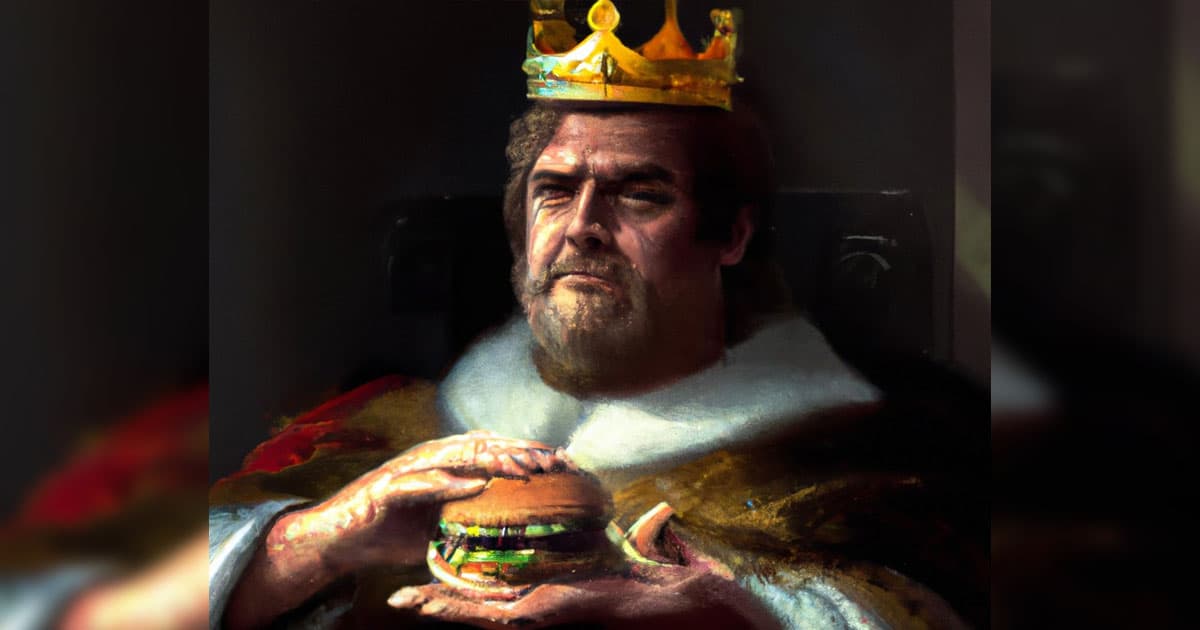 All hail the true Burger King.

All hail the true Burger King.

OpenAI's powerful new neural network has "painted" a freaky-looking "burger king" that could give the bloodthirsty Henry VIII a run for his money.

DALL-E 2, the latest artificial intelligence system from the company co-founded by Elon Musk, can turn simple text prompts into incredibly beautiful and realistic-looking works of art.

For this "painting," OpenAI market manager Adam Goldberg instructed the neural network to create "an oil painting portrait of the regal Burger King posing with a Whopper" — and did it ever comply.

an oil painting portrait of the regal Burger King posing with a Whopper #DALLE pic.twitter.com/iRX1OUO40i

This latest work of DALL-E 2 art is yet another example of the increasing power of neural networks, which less than a decade ago were generating cookie cutter psychedelic swirls and corgis a la Google's "Deep Dream" AI.

Neural networks have become so advanced now that some experts, like OpenAI chief scientist Ilya Sutskever, believe some of the most sophisticated ones out there may already be "slightly conscious."

There's a lot of debate about whether or not sentient AIs are even possible at all, but the fact remains that algorithms are getting smarter and smarter every year, as demonstrated by DALL-E 2's artistic prowess.

Given that OpenAI's other major AI, the text-generating GPT, has gotten a ton of flak for being repeatedly put to nefarious use, the company made sure to keep close tabs on who gets to play with its latest AI system. That means only a select few can actually make use of it as of right now.

That said, it's awesome to see this kind of generative art — and makes us excited, if not slightly terrified, to see what these computer systems will dream up next.

AI After All
This Entire Sci-Fi Magazine Generated With AI Is Blowing Our Puny Human Minds
Yesterday
Read More
Let Them Fight
Whatever You Think of BuzzFeed's AI Quizzes, They're Way Less Horrible Than What CNET Has Been Doing
Yesterday
Read More
Chinese Chatbots
Chinese Company Gearing Up to Release Powerful ChatGPT Competitor
Wednesday
Read More
+Social+Newsletter
TopicsAbout UsContact Us
Copyright ©, Camden Media Inc All Rights Reserved. See our User Agreement, Privacy Policy and Data Use Policy. The material on this site may not be reproduced, distributed, transmitted, cached or otherwise used, except with prior written permission of Futurism. Articles may contain affiliate links which enable us to share in the revenue of any purchases made.
Fonts by Typekit and Monotype.