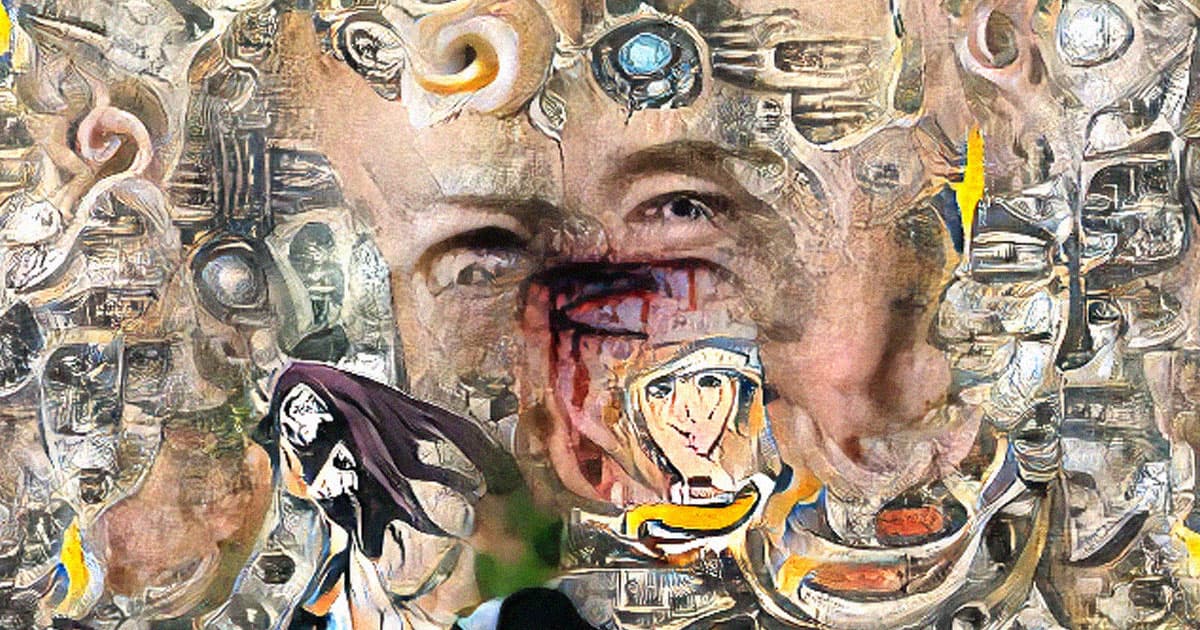 Do androids dream of electric creeps?

Do androids dream of electric creeps?

The nightmare neural networks are back at it again — and this time, they're taking requests.

Ever wanted to know how an artificial intelligence bot would "paint" Ben Franklin and Sonic the Hedgehog battle rapping over the legality of cocaine, or what it would have looked like had the late, great MF Doom played cards with Gilles Deleuze?

If so, you're in luck. As their handle suggests, Twitter user and generative artist @ai_curio_bot uses neural networks to create gorgeous, trippy works of art. Per the artist's other account, @ai_curio, they've created two bespoke neural networks — Looking Glass AI and Zoetrope 5 — to generate the phantasmagoric and often-hilarious pieces showcased on their account.

Along with creating the art itself, the latest iteration of the account also allows fans to submit prompts to the artist's neural networks, and see what it spits out. Unsurprisingly, the results are insane.

The Dark Side of Pop Culture

In response to the "neon nights wizard gang" prompt, the neural networks created a badass-looking collective that look a whole lot like the neon-themed "Golums" gang who stalked the streets of Gotham in 1997's "Batman & Robin"

When another user directed the bot to envision a new "Shrek" poster, it got to work and... created a nightmarish work of abstract art that looks more like 2021's "The Green Knight" than any forthcoming Pixar film.

This impressionistic style of generative art has made leaps and bounds over the past few years since Google's "deep dream" made those weird bubble-eyed doggo pics ubiquitous, and it's so freaking awesome to see the people behind these sorts of accounts not only bringing their own terrifying and whimsical ideas to life, but also allowing fans to get in on the action as well.

The bot's submission inbox is backed up, but hopefully it will soon get to our request to see a nightmarishly abstract look at Elon Musk throwing a shoe at Jeff Bezos.