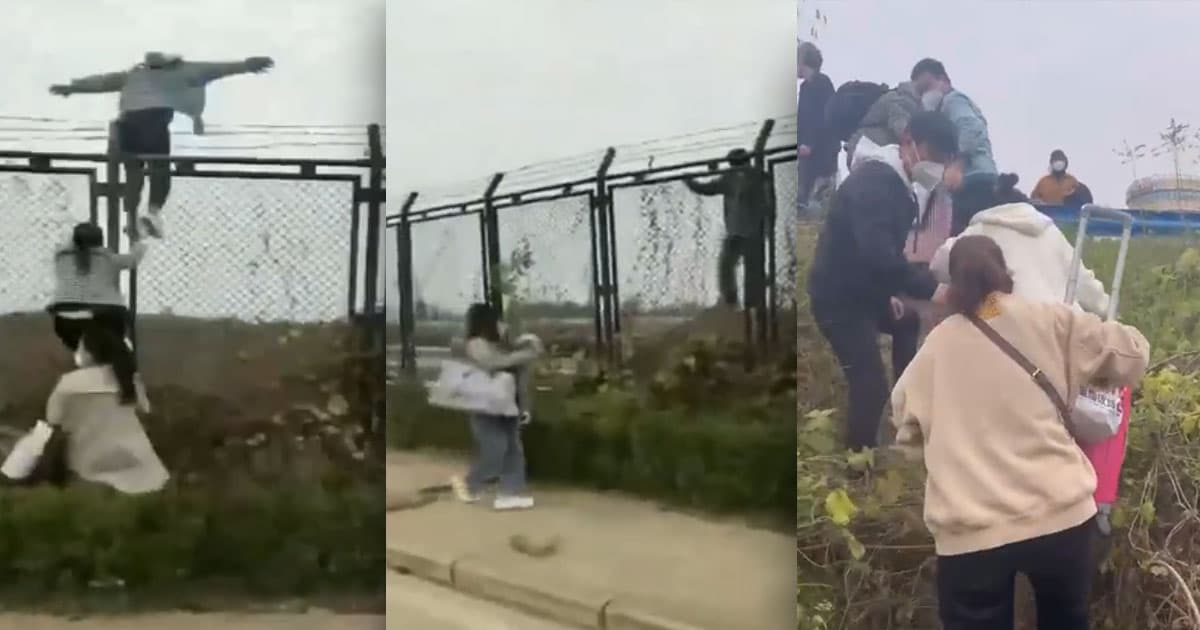 Videos circulating on social media show what appear to be workers at Foxconn's iPhone manufacturing plant in China jumping a fence, reportedly to escape a lockdown stemming from the country's strict zero-COVID policies.

As the BBC reports, the footage allegedly shows roughly a dozen workers getting away after Chinese officials started tightening the rules at the world's largest iPhone factory, forcing them to eat in their dorms and subjecting them to daily testing and quarantines.

That's despite Foxconn telling Reuters over the weekend that workers were allowed to leave if they wished.

As coronavirus cases are again on the rise in the country, the spotlight has yet again fallen on China's controversial zero-COVID policy, a rigid set of guidelines that have led to drawn out and often inescapable lockdowns for millions of people there.

Workers have broken out of #Apple’s largest assembly site, escaping the Zero #Covid lockdown at Foxconn in #Zhengzhou. After sneaking out, they’re walking to home towns more than 100 kilometres away to beat the Covid app measures designed to control people and stop this. #China pic.twitter.com/NHjOjclAyU

Over the weekend, a video of a Chinese business man justifying these policies went viral. The consultant argued that in ten years, the West will fall behind as most of the workers will be suffering from long-COVID, while China comes out on top.

But some workers in the country have seemingly had enough.

"It was total chaos in the dormitories," a Foxconn worker identified as Xia told The Financial Times. "We jumped a plastic fence and a metal fence to get out of the campus."

"I will never go back to Foxconn," another worker named Xu told the newspaper. "They don’t have humanity there."

On October 19, Foxconn banned all dine-in catering, but later reversed the decision over the weekend, according to the BBC.

"The government agreed to resume dine-in meals to improve the convenience and satisfaction of employees' lives," Foxconn said in a Sunday statement.

According to the FT, the area surrounding the plant had been fully locked down, with roads completely blocked off, an attempt to contain an outbreak.

As Reuters reports, cases of COVID-19 have been on the rise in Zhengzhou, which is home to Foxconn's plant, leading officials to enforce a partial lockdown.

Now, cities are getting ready for an influx of workers escaping the factory. Foxconn employs around 200,000 workers at its Zhenzhou facilities alone.