Elon Musk: "Doesn’t Seem to Be Any Life in This Solar System"

So you're telling me there's still a chance? 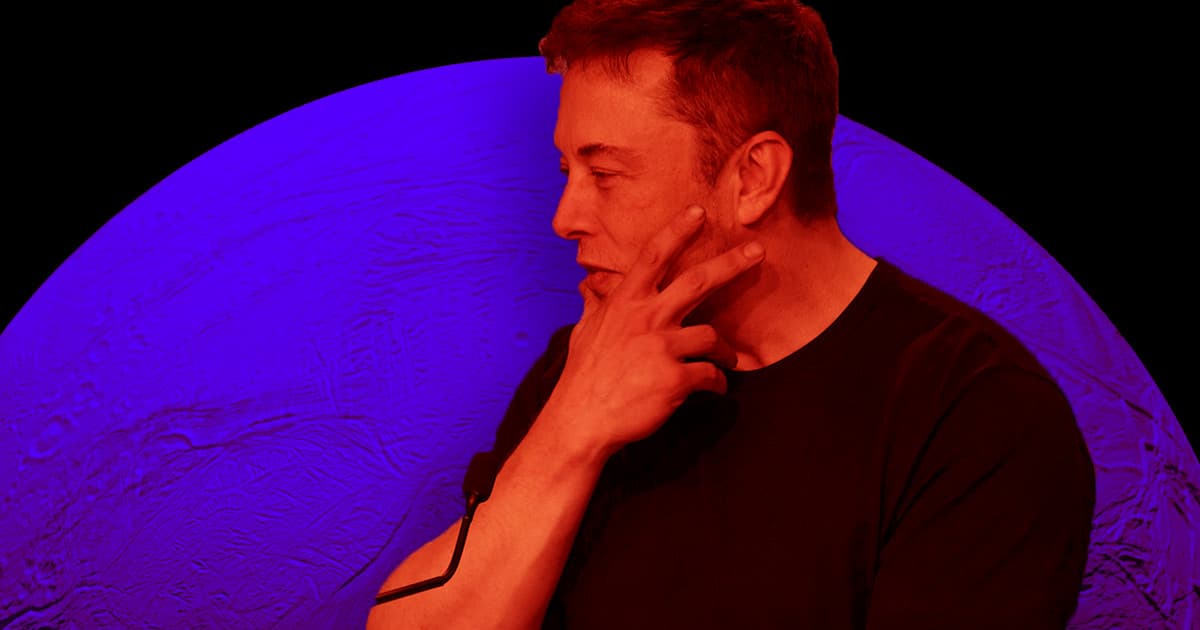 Time to wrap it up, folks. The search is over.

"Doesn't seem to be any life in this solar system," billionaire and SpaceX CEO Elon Musk wrote in a recent tweet, responding to fan mail from an Australian 13-year-old.

Presumably, he meant life outside Earth, where its existence is fairly well established. But he conceded there might still be a chance that it's hiding elsewhere in our system — even if it has little resemblance the type we're accustomed to.

"Maybe under the ice of Europa or extremophile bacteria below the surface of Mars," Musk added.

The eccentric billionaire also pointed the kid to the Wikipedia entry for the Drake equation. In short, the equation attempts to estimate the number of extraterrestrial civilizations in our galaxy. First formulated by Frank Drake in 1961, the equation requires you to plug in variables, of which estimates vary widely. But it did become a road map of what we still needed to figure out before we can say once and for all if we are alone in our galaxy.

Closer to home, xenobiologists have a few ideas for where to look for life in our own system. As Musk points out, icy moons such as Saturn's moon Enceladus or Jupiter's moon Europa could be capable of harboring life in deep subsurface oceans, protected from space radiation and other hostile conditions by a thick layer of ice.

Scientists have found that conditions in these oceans could be favorable. For instance, researchers found traces of organic compounds in plumes that burst from Enceladus' surface, appearing to be the building blocks of amino acids, the precursors of Earth-based lifeforms.

Other researchers concluded that Europa's oceans could have a similar chemical compositions to Earth’s saltwater, making it more hospitable than we initially thought.

Some have even gone as far as claiming that life on Europa could be strikingly intelligent.

"If there is something on Mars, it’s likely to be very small — bacteria," Monica Grady, the chancellor at Liverpool Hope University in the UK, said in a contentious statement back in February. "But I think we’ve got a better chance of having slightly higher forms of life on Europa, perhaps similar to the intelligence of an octopus."

Speaking of Mars, NASA's series of rovers have brought us tantalizing clues as to what we could find once we travel to the Red Planet, an endeavor extremely close to Musk's heart.

Some even believe that we've long found life on Mars during NASA's Viking missions in the mid-70s. At the time, the Viking lander's Martian soil sample let off radioactive carbon dioxide when mixed with a reagent, a sign of the existence of microorganisms to former NASA scientist Gilbert Levin.

Levin's conclusion, however, has proven controversial, with the scientist being forced to self-publish his findings due to most reputable journals turning him away.

Most recently, researchers were surprised to find phosphine in the atmosphere of Venus — a sign that there could be microbial life hiding in its clouds.

But it's too early to say anything for sure.

Schulze-Makuch and his team identified "thiophenes" in readings collected by NASA's Curiosity rover, special compounds found in coal, crude oil and white truffles back on Earth — a discovery consistent with early life on Mars.

“I think the proof will really require that we actually send people there, and an astronaut looks through a microscope and sees a moving microbe," he added.

More on life on Venus: A Spacecraft Is Going to Hunt Life in Venus’ Clouds This Week