"When we got the first hints of phosphine in Venus’ spectrum, it was a shock!" 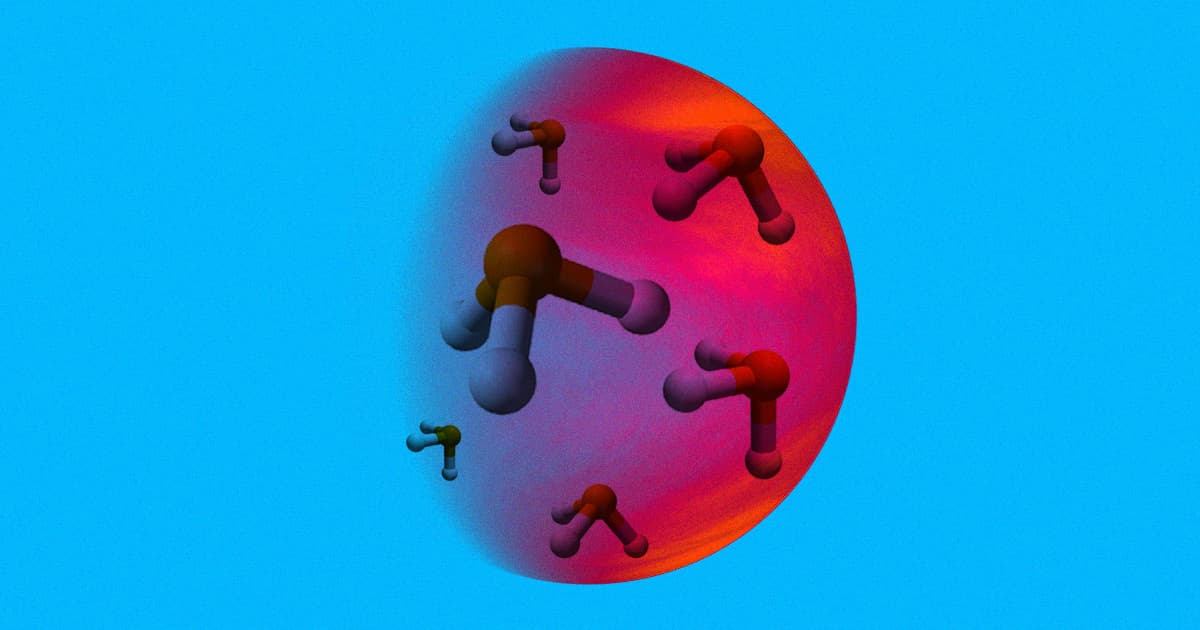 Researchers have discovered significant sources of phosphine in the atmosphere of Venus — a colorless and odorless gas that they say is a possible sign of life, as it's often the result of organic matter breaking down here on Earth.

The research was led by Jane Greaves from Cardiff University in the UK, and was published in Nature Astronomy today.

So far, Venus hasn't topped the list of planets seen by astrobiologists as most likely to harbor life. Its surface is a swirling mix of toxic and extremely hot vapors, and temperatures can reach a toasty 800 degrees Fahrenheit (426 Celsius), while high concentrations of sulfuric acid raining from the skies — with thick clouds blocking most sunlight from ever reaching the surface — would ensure that life as we know it would stand little chance of surviving there.

But despite the inhospitable environment on the surface, some microbial life may be able to survive in the planet's atmosphere, the researchers hypothesize.

The researchers argue that conventional abiotic mechanisms producing phosphine gas couldn't entirely account for the unusually high presence of phosphine gas they detected in the atmosphere of Venus. In other words, some of the phosphine gas could have been the result of organic processes.

The team brought forward some ideas as to how phosphine could have been crated through abiotic processes, including sunlight, minerals blown up from the surface, volcanoes, and even lighting. None of the options could've made enough of the stuff, however. According to their calculations, natural sources would only account for a maximum of one ten thousandth of the amount detected.

On top of that, to create the observed amount of phosphine, organisms on Earth would only need to work at about ten percent of their maximum productivity, as Paul Rimmer of Cambridge University concluded, according to the statement.

To make their discovery of the gas, the team used the James Clerk Maxwell Telescope (JCMT) in Hawaii.

"This was an experiment made out of pure curiosity, really — taking advantage of JCMT’s powerful technology, and thinking about future instruments," Greaves said in a statement. "I thought we’d just be able to rule out extreme scenarios, like the clouds being stuffed full of organisms. When we got the first hints of phosphine in Venus’ spectrum, it was a shock!"

The team later confirmed the detection of phosphine using the more sensitive ALMA observatory in the Atacama desert in Chile.

"In the end, we found that both observatories had seen the same thing – faint absorption at the right wavelength to be phosphine gas, where the molecules are backlit by the warmer clouds below," Greaves added.

"The discovery raises many questions, such as how any organisms could survive," Clara Sousa Silva, team member at MIT, said in the statement. "On Earth, some microbes can cope with up to about 5% of acid in their environment — but the clouds of Venus are almost entirely made of acid."

To answer that question, other astronomers came up with their own hypothesis. A recent paper, research led by leading astronomer Sara Seager at MIT, suggested that life could survive in tiny droplets falling towards the ground via gravity. Once those droplets reach the lower levels of Venus's atmosphere, they'd dry up.

Previous research has shown that the clouds of Venus may actually harbor far more favorable conditions than the surface, with temperatures in the range of 0 to 60 degrees Centigrade and pressures — well within the range of Earth.

"We propose for the first time that the only way life can survive indefinitely is with a life cycle that involves microbial life drying out as liquid droplets evaporate during settling, with the small desiccated 'spores' halting at, and partially populating, the Venus atmosphere stagnant lower haze layer," Seager's team wrote in the paper.

They suggest that such a lower haze layer, 33 to 48 kilometers in altitude, could be a "'depot' for desiccated microbial life." These desiccated forms would then return to the cloud layer by upward diffusion and 'rehydrate for a continued life cycle."

But would be be able to detect these lifeforms? Researchers argued in a 2018 paper "that particles in Venus' lower clouds contain sufficient mass balance to harbor microorganisms, water, and solutes, and potentially sufficient biomass to be detected by optical methods."

Thanks to data collected by the European Space Agency's Venus Express probe, which circled the planet for over eight Earth years, researchers found that most UV was absorbed by sulfur dioxide and iron chloride in the planet's cloud layer.

Still, scientists may have missed something. Alongside the presence of sulfur compounds, carbon dioxide, and water in these cloud layers, the researchers argue that "coupled iron- and sulfur-centered metabolism in the clouds" could also allow microorganisms to survive there.

More on Venus: MIT Scientists Suggest Life Could Thrive in the Clouds of Venus

Read This Next
Life on Venus
MIT Scientists Say Life May Have Been Detected on Venus After All
Venus Life Trap
Research: Jupiter Likely Turned Venus Into an Uninhabitable Hellhole
Can't Even
Scientist Behind Venus Life Claim Describes It as "Crazy"
Futurism
Rethinking Aliens: We Found Life in a Place Once Considered Sterile
Futurism
Newly Discovered Fossils Reveal Earliest Complex Life on Earth
More on Hard Science
Tractor Beam
Thursday on the byte
Scientists Build Working Tractor Beam, Although It's Comically Tiny
Having a Blast
Jan 18 on the byte
New Study Shows Where You Should Hide to Survive a Nuclear Attack
Offworld Amino
Jan 15 on the byte
Scientists Find Building Blocks of Life in Meteor That Smashed Into Family's Driveway
READ MORE STORIES ABOUT / Hard Science
Keep up.
Subscribe to our daily newsletter to keep in touch with the subjects shaping our future.
+Social+Newsletter
TopicsAbout UsContact Us
Copyright ©, Camden Media Inc All Rights Reserved. See our User Agreement, Privacy Policy and Data Use Policy. The material on this site may not be reproduced, distributed, transmitted, cached or otherwise used, except with prior written permission of Futurism. Articles may contain affiliate links which enable us to share in the revenue of any purchases made.
Fonts by Typekit and Monotype.