Scientists say Jupiter's gravity pulled Venus out of an orbit that could sustain life — likely killing most or all organisms living there. 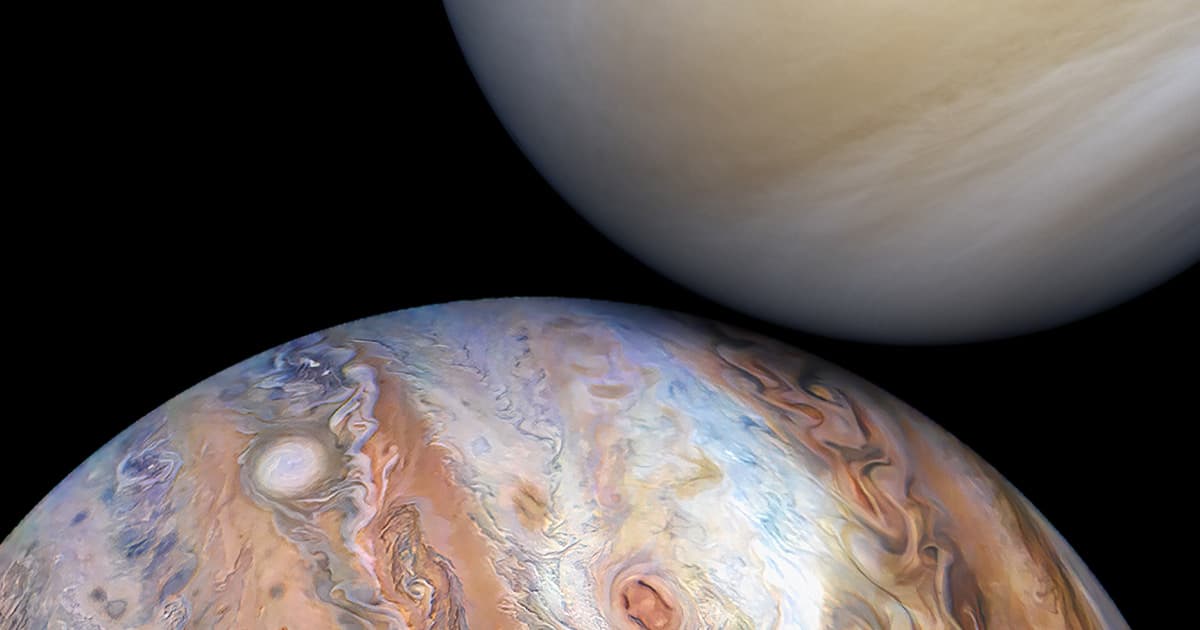 According to new research, the massive heft of Jupiter — a planet that's more than 2.5 times the mass of all other planets in our solar system combined — may have disturbed Venus's orbit to the point where it was no longer capable of hosting life.

Venus is now a hellscape, where surface temperatures regularly reach 800 degrees Fahrenheit. Highly acidic rain would give life as we know it an even slimmer chance at survival.

But long ago, the planet may have been far more habitable.

"One of the interesting things about the Venus of today is that its orbit is almost perfectly circular," University of California astrobiologist Stephen Kane, lead author of a new paper published in The Planetary Science Journal earlier this month, said in a statement. "With this project, I wanted to explore whether the orbit has always been circular and if not, what are the implications of that?"

According to the research team's simulations, Venus's orbit may have been far more eccentric — less of a circle, more of an oval — but that may have made it far more habitable as well.

That eccentricity may have been caused by Jupiter's migration first toward and then away from the Sun over its history, which because of its vast size also affected the orbits of other giant planets.

"As Jupiter migrated, Venus would have gone through dramatic changes in climate, heating up then cooling off and increasingly losing its water into the atmosphere," Kane explained.

"We argue that these eccentricity variations for the young Venus may have accelerated the atmospheric evolution of Venus toward the inevitable collapse of the atmosphere into a runaway greenhouse state," the researchers write in their paper.

The news comes after scientists were baffled to find significant sources of phosphine in the Venusian atmosphere, a possible sign of life.

But Kane says it's too early to claim there's life on Venus. "There are probably a lot of other processes that could produce the gas that haven't yet been explored," Kane said in the statement.

Still, he said, there's a chance that the gas could be the sign of "the last surviving species on a planet that went through a dramatic change in its environment."

READ MORE: Venus might be habitable today, if not for Jupiter [University of California]

More on Venus: Life May Have Hopped From Earth to Venus on Asteroid, Scientists Say

Read This Next
Futurism
The James Webb Space Telescope Is Going to Stare Straight Into Jupiter
Life on Venus
MIT Scientists Say Life May Have Been Detected on Venus After All
Can't Even
Scientist Behind Venus Life Claim Describes It as "Crazy"
Venus Smells Like Rotting Fish
Breaking: Researchers Discover Signs of Life on Venus
Young Hot Jupiter is My Drag Name
This Super Young Jupiter-Sized 'Hot Planet' is Puzzling Astronomers
More on Hard Science
Moved to Tears
Jun 30 on the byte
Scientists Say New James Webb Images Are So Powerful That It Was Emotional Just Looking at Them
Good God
Jun 28 on the byte
Huge Cloud of Toxic Yellow Gas Kills 13
zombie star
Jun 28 on futurism
Scientists Puzzled by Star That Exploded in Supernova But Somehow Survived
READ MORE STORIES ABOUT / Hard Science
Keep up.
Subscribe to our daily newsletter to keep in touch with the subjects shaping our future.
+Social+Newsletter
TopicsAbout UsContact Us
Copyright ©, Camden Media Inc All Rights Reserved. See our User Agreement, Privacy Policy and Data Use Policy. The material on this site may not be reproduced, distributed, transmitted, cached or otherwise used, except with prior written permission of Futurism. Fonts by Typekit and Monotype.