A Wave of Incredible Heat Ripped Through Jupiter

This planetary scientist may have an answer as to what caused it. 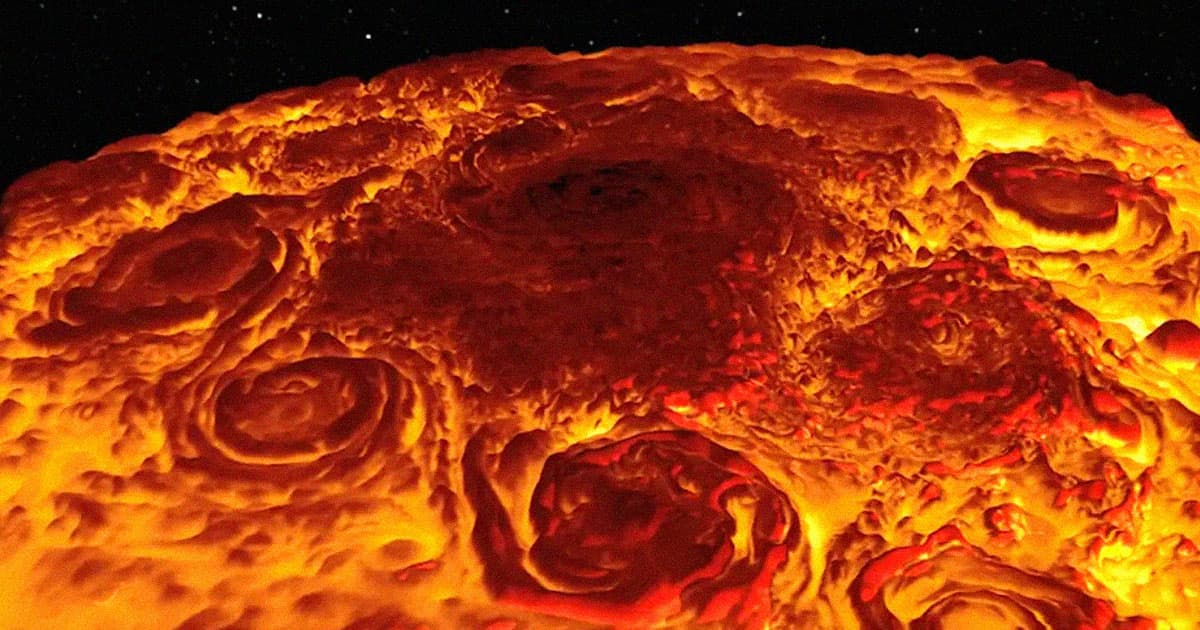 The Earth isn't the only planet experiencing extraordinary heat waves.

The heat wave stretched for some 80,000 miles — roughly the equivalent of ten Earths lined up next to each other — racing from the gas giant's poles to the equator at speeds of over 600 mph.

Until now, why Jupiter experiences extreme temperatures — even in the absence of surging heat waves — has remained a scientific mystery. It only gets less than four percent of the warming sunlight that Earth does, which should suggest that it'd be a lot colder.

This discrepancy, nicknamed the "giant planet energy crisis," has been puzzling astronomers since the 1970s — but fortunately, we may be getting much closer to an answer.

At this year's Europlanet Science Congress (EPSC), O'Donoghue and his colleagues presented their latest theory as to what may have caused Jupiter's blistering heat wave: its auroras.

Unlike Earth's auroras, which only occur during intense solar wind activity, auroras are a permanent presence in Jupiter's atmosphere.

O'Donoghue and his colleagues previously found that these auroras can get intense enough to heat the regions around Jupiter's poles. Forceful winds then push this heat around the entire planet's surface.

The massive "high-temperature planetary-scale structure," as described in a paper published in the journal Nature last year, only added credence to the theory.

"The heat wave is highly likely the result of a recent, large injection of energy to the auroral/polar region," O'Donoghue told Futurism. "We see this at Earth, but this is the first time we’ve seen it at another planet."

"These heat waves are an extra source of heat in upper atmospheres in general," he explained, "driven by the solar wind."

In fact, Jupiter may not be the only planet experiencing these scorching waves of heat.

"Saturn, Uranus and Neptune are also measured to be hundreds of Kelvin warmer than expected based on the amount of sunlight they receive," O'Donoghue added. "There is evidence that the distribution of auroral heat occurs at Saturn, while we can only speculate that it may also exist at Uranus and Neptune at present."

In short, the Sun could have far-reaching effects on the evolution of not only Jupiter's atmosphere, but other planets in our solar system as well — a tantalizing glimpse into what drives the turbulent nature of our largest planetary neighbors.

Read This Next
Futurism
The James Webb Space Telescope Is Going to Stare Straight Into Jupiter
Star War
Scientists Are Trying to Figure Out How to Kill Stars with Black Holes
Venus Life Trap
Research: Jupiter Likely Turned Venus Into an Uninhabitable Hellhole
Young Sun Planets
This is the First Image of a Multi-Planet System Around a Sun-Like Star
Young Hot Jupiter is My Drag Name
This Super Young Jupiter-Sized 'Hot Planet' is Puzzling Astronomers
More on Hard Science
It From Bit
Nov 22 on the byte
A Scientist Is Crowdfunding an Experiment to Check if We Live in a Simulation
Water Carrying
Nov 20 on the byte
Evidence Grows That Soggy Meteorites Gave Earth Its Oceans
Shroom News
Nov 20 on the byte
Scientists Build Circuit Boards Based on Mushrooms
READ MORE STORIES ABOUT / Hard Science
Keep up.
Subscribe to our daily newsletter to keep in touch with the subjects shaping our future.
+Social+Newsletter
TopicsAbout UsContact Us
Copyright ©, Camden Media Inc All Rights Reserved. See our User Agreement, Privacy Policy and Data Use Policy. The material on this site may not be reproduced, distributed, transmitted, cached or otherwise used, except with prior written permission of Futurism. Articles may contain affiliate links which enable us to share in the revenue of any purchases made.
Fonts by Typekit and Monotype.