Elon Musk Has Lost $100 Billion in Under a Year 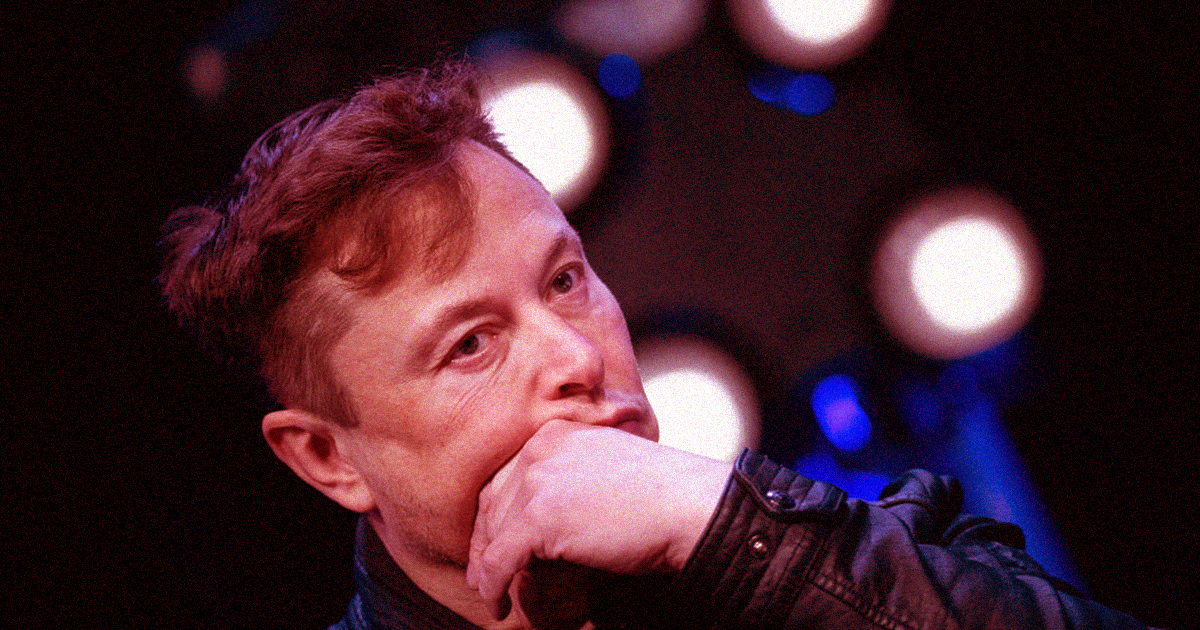 Last year, as his net worth soared past $300 billion dollars, Elon Musk was crowned the world's richest person in history.

Fast forward about 11 months — involving a "bad feeling" about the economy, a sudden, complicated, and likely soiled bid to buy Twitter, and a self-imposed foray into social media foreign policy — and according to Forbes, over $100 billion of that historic net worth has effectively vanished. As of Thursday, Musk's net worth is down to around $209.4 billion, in a 35 percent year-over decrease.

Don't get us wrong. Musk's wealth is still so unfathomably vast that even after losing that $100 billion, he's still the world's richest person. Still, that's a lot of money to lose, especially as far as it can be attributed to the founder's chaotic personal antics: secret babies with employees, escalating US-Russia tensions over the war in Ukraine with a Twitter poll.

That being said, though, one could argue that Musk would never have become who he is — and with that, how wealthy he is — today if not for his deeply chaotic online presence. His use of Twitter to rile and agitate has no doubt contributed to his cultural relevance, and alongside that relevance, investors and fans alike have followed.

Or it did, at least. These new numbers tell a different story, and they likely have a lot to do with Musk's maybe-failed deal to buy Twitter. He can't put up the money alone, and at least one of his outside investors has very publicly stated that they and others want out. (As a partial result of that bungled deal, the founder may soon be up for a national security review. So there's that, too.)

"The problem for Tesla investors is that more stock sales are likely by Musk to fund [the Twitter] deal," Wedbush analyst Dan Ives told Forbes, "which we believe will go down as one of the worst, most overpaid M&A deals in the history of the market."

But drama aside, his actual companies have faced more, uh, normal difficulties. The economy is hurting everyone, for starters. And earlier in the year, the CEO quipped that due to supply chain woes, his Tesla gigafactories should have sounded "like a giant roaring sound which [was] the sound of money on fire." Of course, government recall investigations might have had something to do with those money troubles, too.

At the end of the day, Musk is still richer than one Jeff Bezos, so we're sure he's pleased about that. In any case, it's unlikely that the world's still-richest man will change his controversial ways anytime soon — after all, he's clearly not that worried about what those ways might do to his own savings. The jury's still out on whether his investors will continue to trust him with theirs, though.

READ MORE: Elon Musk's Fortune Has Fallen By More Than $100 Billion In Less Than A Year [Forbes]

More on Musk: Former Tesla Exec Says Elon Musk Can Be like a "Toddler" Having a "Tantrum"

Read This Next
Head Like A Hole
Elon Musk's Crying About Trent Reznor Shows That He Is a Big, Big Baby
Secrets Secrets
Elon Musk Vigorously Denies That SBF Secretly Owns Part of Twitter
Good Time to Leave
Panicked Elon Musk Reportedly Begging Engineers Not to Leave
#NastyNasty
Elon Musk's Mom Pleads With Everyone to Stop Being So Mean to Her Perfect Boy
You're Fired
Elon Musk Is Mass-Firing Employees Who Dared Criticize Him in Slack
More on Future Society
Miserly Musk
Tuesday on the byte
Cheapskate Elon Musk Refusing to Pay Bills at Twitter
Tesla Tank
Tuesday on the byte
Elon Musk's Wealth Has Plummeted by Over $100 Billion This Year
Extremely Hardcore
Nov 18 on the byte
Elon Musk Locks Twitter Employees Out Office, Then Asks Them to Meet Him on the 10th Floor
READ MORE STORIES ABOUT / Future Society
Keep up.
Subscribe to our daily newsletter to keep in touch with the subjects shaping our future.
+Social+Newsletter
TopicsAbout UsContact Us
Copyright ©, Camden Media Inc All Rights Reserved. See our User Agreement, Privacy Policy and Data Use Policy. The material on this site may not be reproduced, distributed, transmitted, cached or otherwise used, except with prior written permission of Futurism. Articles may contain affiliate links which enable us to share in the revenue of any purchases made.
Fonts by Typekit and Monotype.