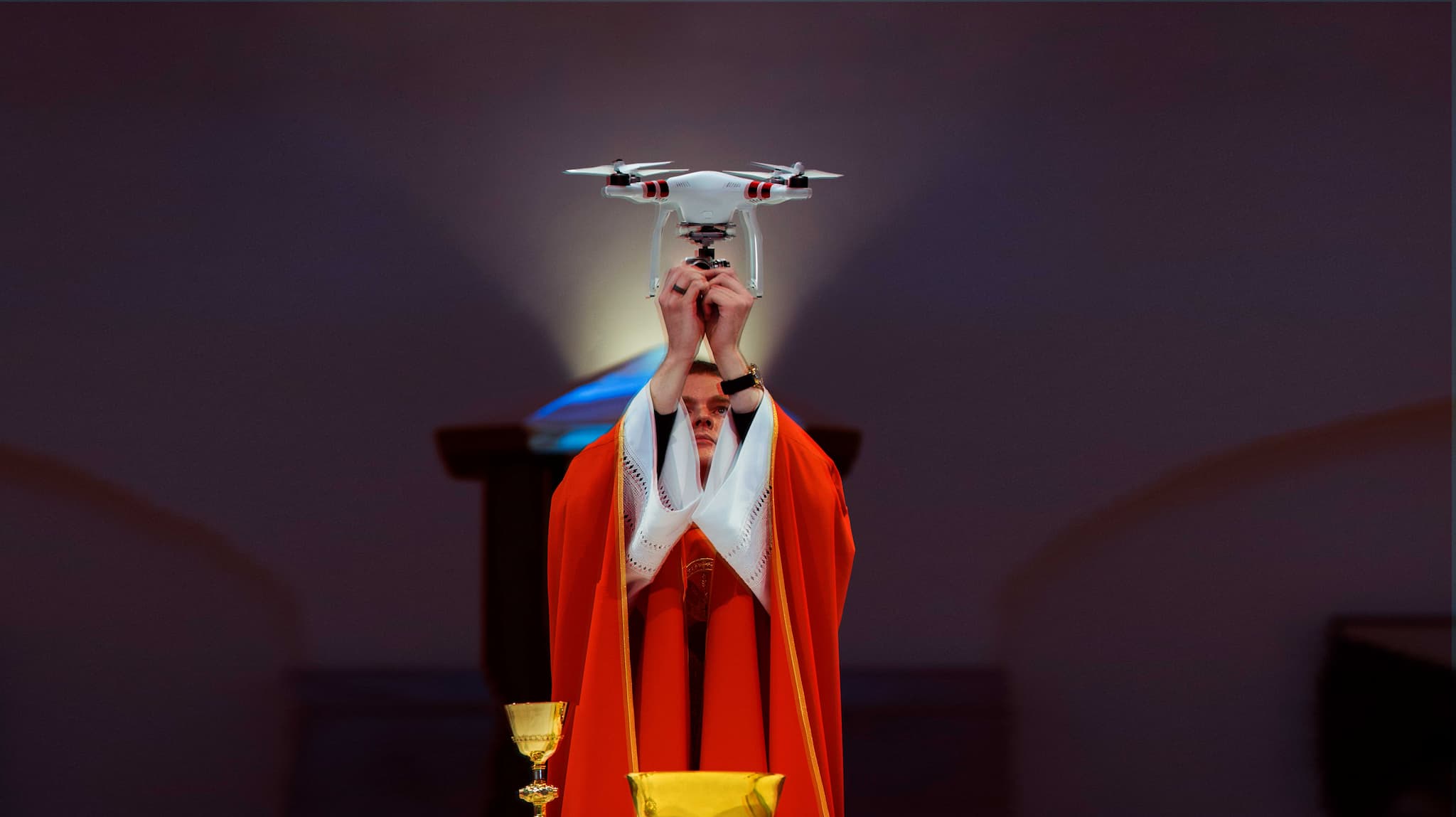 Stop me if you’ve heard this one: Catholics of the internet are outraged at a scandalous video. It features something that some claim has no place in a church.

That thing? It’s a drone.

For Easter Mass, someone at the São Geraldo Magela church in Sorocaba, Brazil, thought it would be a good idea to have a drone deliver the eucharist.

(A brief brush-up: the eucharist is the bread and wine Catholics believe transforms into the literal body and blood of Christ after a priest consecrates it. It’s a pretty big deal in the Catholic church; communion is one of the holiest of holy religious rituals. Which is why so many Catholics are ticked off.)

Priest John Zuhlsdorf called having a drone deliver the eucharist “sacrilegious silliness” on his blog, and the church’s Facebook page is now inundated with comments denouncing its use of the drone. Since the video’s release, about 100 people have left abysmal 1-star reviews on the site’s Facebook page, which boasts just two reviews for the entire year prior. Most are in Portuguese, but the few English language reviews include:

“I pray your Chruch [sic] burns to the ground with the priests who allowed the drone to hold the Sacred Species and a better one replaces it. Congratulations on entering the running for worst Catholics in the universe.”

“HOW COULD YOU PEOPLE DISRESPECT THE HOLY SACRAMENT HANGING IT TO A DRONE??? SERIOUSLY?? WE ARE GOING TO DENOUNCE THIS TO THE HOLY SEE. DO YOU EVEN BELIEVE THAT MOST HOLY SACRAMENT IS JESUS CHRIST IN PERSON? YOU DO NOT!! SACRILEGIOUS PEOPLE! YOUR PRIEST IS A FRAUD!”

“It was written that you would be a house of prayer but you insist on being a den of sinfulness.”

While the video’s creator deserves all the 1-star reviews imaginable for filming in portrait and not landscape mode, it’s a matter of opinion whether the church really deserves all this hate for having a drone deliver the eucharist.

Still, this is clearly a hot-button issue on the intersection of tech and society, and as such, we thought it appropriate to break down the video play-by-play to help get to the bottom of the controversy.

Was the church being sacrilegious by letting a drone deliver the eucharist? Or simply using a little 21st-century tech to get folks hyped for Jesus’s return? Read our recap below and judge for yourself.

0:01–0:03 The camera pans over the crowd, most of whom are wearing their favorite t-shirts and polos. They cheer and wave like it’s the second coming as the camera directs its attention toward the church’s open double doors. We land on the eucharist-carrying drone, its red LEDs flashing brightly against the darkness outside.

0:04–0:05 The shoe-box-sized quadcopter moves down the church’s center aisle at eye-level. Its khaki shorts-clad operator follows closely behind, using a controller to guide the drone on its sacred journey.

0:06–0:09 A gray-haired co-pilot crouch-walks behind the drone, the fire in her quads no doubt matched only by the burning love for Jesus in her heart.

0:10–0:19 Oh no! The drone dips to just a couple of feet above the ground. Thankfully, the body of Christ has its own savior, and she quickly offers her assistance, gently supporting the drone on its short trip to the center of the church. She then raises the device above her head as the crowd claps and cheers in anticipation.

0:19–0:29 And we have liftoff! She releases the drone, and it soars onward and upward toward the front of the church, seemingly into the outstretched arms of a statue of Mary before hanging a left. Not today, Mary.

0:30–0:36 The crowd begins chanting. We don’t speak Portuguese, but if we had to guess, they’re probably saying something like, “Christ is risen!” or “Go, droney, go!”

0:37–0:47 The drone pauses far above the heads of the priest and a dozen or so white-robed church members, taking in the adoration before beginning its descent into the outstretched arms of its co-pilot.

0:47–1:10 She holds the drone steady as the priest removes its cargo. Like Rafiki presenting a newborn Simba, he holds the holy host toward the congregation, which erupts in even more cheers.

1:11–1:24 The priest walks across the stage to place the host at the center of the alter. The ringing of bells and singing of the choir becomes audible as the crowd quiets down. The drone’s journey is complete.

Read This Next
FROM THE DEPT. OF THINGS TO BUY
Best Science Gifts of 2022
Drone Tanker News
The US Navy Just Used a Drone to Refuel a Fighter Jet in Midair
Killer Copter
Middle Eastern Nation First to Buy Drone Armed With Machine Gun
Typical Day In Russia
Watch Russia’s New Shotgun-Wielding Drone in Action
Hail SanTO
This Robot Reads the Bible to Old People in Nursing Homes
More on Robots & Machines
FROM THE DEPT. OF...
Yesterday on futurism
Best Father’s Day Gifts of 2022
FROM THE DEPT. OF...
Yesterday on futurism
Best Mouse Pads of 2022
FROM THE DEPT. OF...
Wednesday on futurism
Best Samsung Watches of 2022
READ MORE STORIES ABOUT / Robots & Machines
Keep up.
Subscribe to our daily newsletter to keep in touch with the subjects shaping our future.
+Social+Newsletter
TopicsAbout UsContact Us
Copyright ©, Camden Media Inc All Rights Reserved. See our User Agreement, Privacy Policy and Data Use Policy. The material on this site may not be reproduced, distributed, transmitted, cached or otherwise used, except with prior written permission of Futurism. Fonts by Typekit and Monotype.