Report Hints Porsche Might Have a Passenger Drone in the Works

And an autonomous flying car wouldn't require a pilot's license to operate. 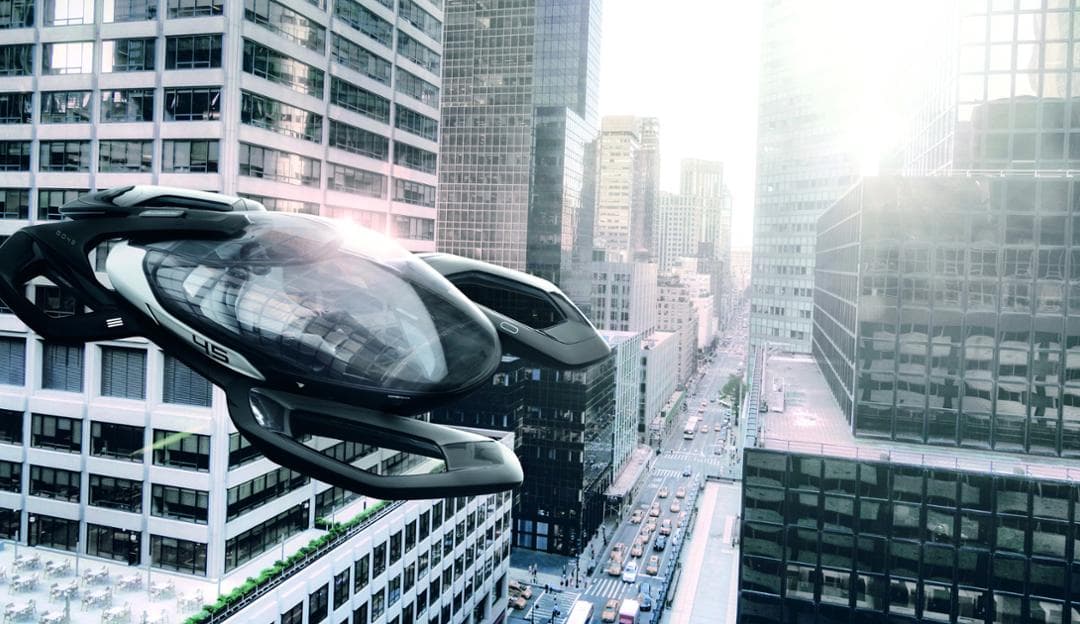 There are companies working on flying cars, and there are those developing flying cars that are autonomous. The latter are referred to as drones, though they're capable of ferrying passengers. Many see flying passenger drones as the future of urban mobility, and rumor has it that Porsche has one in the works.

While the German automaker hasn't confirmed or offered much by way of details, a German automotive industry news site Automobilwoche claims the company is close to releasing the first design sketches. Porsche has yet to comment on the report, but the company's sales director, Detlev von Platen, supposedly hinted at the possibility.

"It would take three and a half minutes to fly the plane," von Platen told Automobilwoche, referring to how long it would take him to fly a passenger drone from Porsche's Zuffenhausen manufacturing plant to Stuttgart Airport. A typical drive would take him "at least half an hour."

Like most other passenger drone concepts, Porsche's would supposedly let passengers have some control over the vehicle — but most of the flying would be automated. In practical terms, that means drivers-turned-pilots wouldn't need to have a pilot's license.

Beyond that, we don't know too much about the potential project — though, given similar projects currently in development, we can imagine the possibilities. Several other companies around the globe have autonomous aerial vehicle (AAV) concepts and flying taxi services in the works, including the EHang 184 from a Chinese company of the same name. The company recently showed footages of the AAV in action. There's also a Detroit-based startup, AirSpaceX, which claims it will have a working autonomous flying taxi by 2026.

If the pressure of the other company's projects has put the heat on Porsche to get in the game, we may see those designs for a passenger drone soon. In the meantime, Volkswagen, Porsche's parent company, has already been working with Airbus on a Pop.Up car-drone hybrid, through its design and engineering arm, Italdesign.

Read This Next
Air Ferry
Paris Will Use Electric Flying Cars to Get Passengers to the Olympics
Green Flying Cars
Study: Flying Cars Could End Up Being Greener Than Electric Cars
Electric Slide
The Highest Performance Next-Gen Porsche 911 Could Be a Hybrid
Futurism
Flying Cars May Work Best When Tethered to Power Lines
Futurism
It's Now Possible to Earn a Degree in "Flying Cars"
More on Advanced Transport
Kapow
Yesterday on the byte
Self-Driving Car Plowed Into Active Fire Scene, Forcing Firefighters to Smash Its Window
Netflix and Drive
Monday on futurism
Mercedes Claims to Have Achieved Level 3 Automation, Beating Tesla
Battery Trouble
Monday on the byte
Tesla "Spontaneously" Bursts Into Flames While Driving Down Freeway
READ MORE STORIES ABOUT / Advanced Transport
Keep up.
Subscribe to our daily newsletter to keep in touch with the subjects shaping our future.
+Social+Newsletter
TopicsAbout UsContact Us
Copyright ©, Camden Media Inc All Rights Reserved. See our User Agreement, Privacy Policy and Data Use Policy. The material on this site may not be reproduced, distributed, transmitted, cached or otherwise used, except with prior written permission of Futurism. Articles may contain affiliate links which enable us to share in the revenue of any purchases made.
Fonts by Typekit and Monotype.