But they won't be here in time. 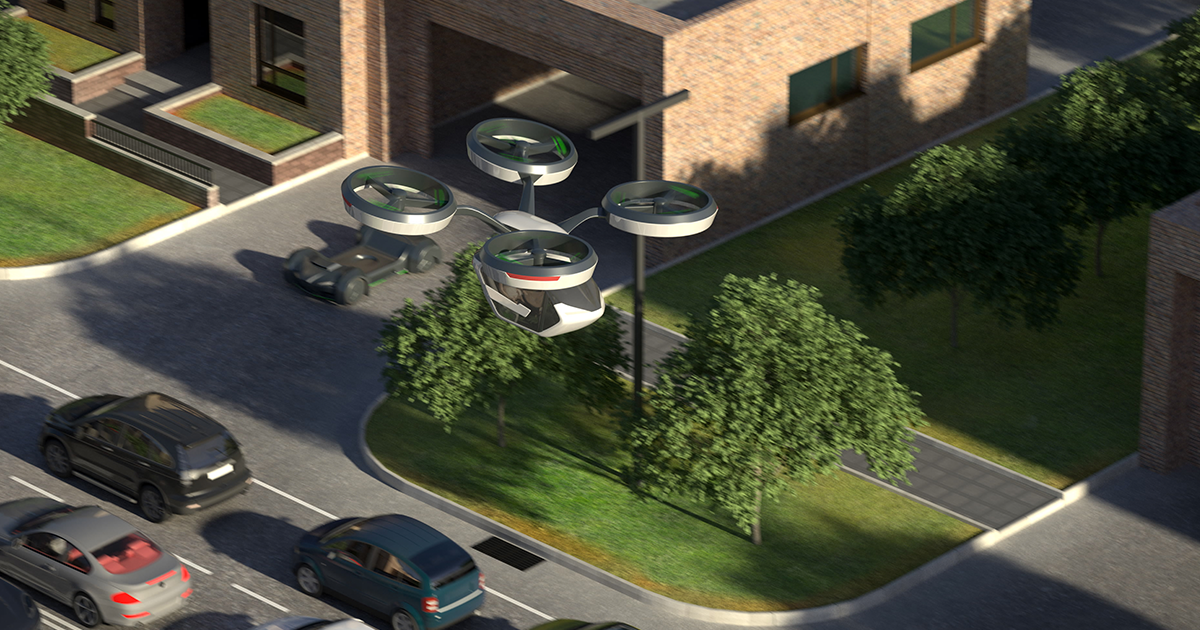 Late to the Party

In a new study published in the journal Nature, a group of researchers from Ford Motors' Research and Innovation Center in Michigan argue that electric flying cars could actually end up reducing emissions over electric cars back on the ground — and free up congested roads in the process.

"However, gaps in necessary technology and practical uncertainties beyond the cars’ promising physics mean that they may not arrive in time to be a large-scale solution to the energy crisis and congestion — if at all," wrote Hugh Hunt, a researcher at the University of Cambridge who wasn't involved with the research, a piece discussing the study for The Conversation.

It seems counter-intuitive that flying cars could have a lower environmental than electric ones while dealing with with air resistance and drag. But the authors of the study found that in their base case of travelling 60 miles, flying a vertical-takeoff-and-landing (VTOL) vehicle such as a flying car could end up cutting emissions by 35 percent compared to a single occupant in a combustion engine car.

But the new numbers also assume future technological innovations from optimum wing designs to low-power electric motors and high-efficiency batteries. The study also found those advantages to diminish with distances longer than 120 miles.

"With technology and safety improvements, they could yet play a part in our fossil-fuel-free future, taking short-haul planes out of our skies and freeing up fume-filled roads," Hunt argues.

READ MORE: Flying cars could cut emissions, replace planes, and free up roads – but not soon enough [The Conversation]

Read This Next
Car Pile Up
Tesla Is Absolutely Spraying Out Cars
Sun Power
Startup Says Its Solar Upgrade for Teslas Adds 60 Miles in Range per Day
No Parking
Condo Association Bans EVs From Parking in Garage, Saying They Pose Fire Risk
Air Ferry
Paris Will Use Electric Flying Cars to Get Passengers to the Olympics
Real American eMuscle
Dodge Says It's Only Making an Electric Car Because the Performance Is So Good
More on Advanced Transport
Shiny!
Yesterday on the byte
Beautiful Render Shows Starship With Full NASA Paint Job
Glitchy Boi
Yesterday on the byte
Glitch in 59,000 Teslas Fails to Call 911 When You Crash
Wrong Turn
Jul 2 on the byte
Terrifying Video Shows Self-Driving Tesla Head Into Oncoming Traffic
READ MORE STORIES ABOUT / Advanced Transport
Keep up.
Subscribe to our daily newsletter to keep in touch with the subjects shaping our future.
+Social+Newsletter
TopicsAbout UsContact Us
Copyright ©, Camden Media Inc All Rights Reserved. See our User Agreement, Privacy Policy and Data Use Policy. The material on this site may not be reproduced, distributed, transmitted, cached or otherwise used, except with prior written permission of Futurism. Fonts by Typekit and Monotype.